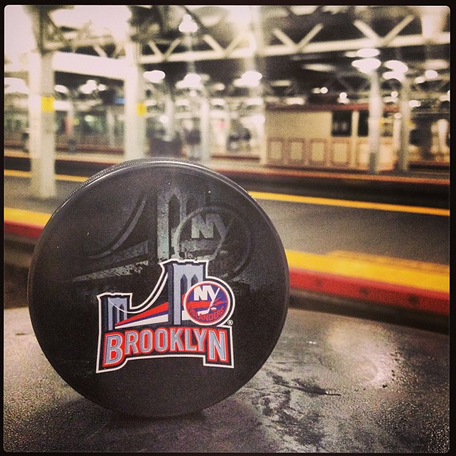 Whether you like it or not, Islanders fans, the puck dropped in Brooklyn last week and it was a small and sour taste of what’s to come in 2015.

I’ve barked some about the change, the impending move from Nassau to Kings County and the break of tradition that pains me the most, but it wasn’t until there was actually a hockey game at the Barclays for us to dissect and analyze so I could actually talk about it wholeheartedly.

Until the game it was just an idea, a bad idea. After the game, it’s still a bad idea.

Here are five reasons why the Barclays won’t work:

5. No identity for the Islanders: Okay, so they brought the Stanley Cup banners. That made some diehards satisfied, but it’s not enough. It’s still very early, but the arena barely looks like it houses the Nets, let alone two pro sports franchises. If you go to a Nets game the arena isn’t decked out too much in Nets colors, logos or paraphernalia. Simplistic aesthetics or not, the Islanders are not going to be top dog in their own house.

The Orange, White and Blue walls at the Nassau Coliseum are as team-focused as you can get and that will not be translated to the walls in Brooklyn. The grey walls and dark colored hallways are morbid. You feel like you’re walking in a dungeon. It’s low light; tight fitting corridors and lack of aesthetic focus are going to be detrimental to its hockey presence.

4. Not enough seats, tight corridors and awkward corner section: Barclays officials said they’ll look into adding more seats, but the look of the arena’s main entrance standing as a grey and plain area behind one of the goals just looks bad. It’s so out of place. You immediately understand that Barclays was never built for hockey. It’s for basketball and concerts and needs some major additions. The hallways, especially on the upper level, are much tighter than you’d expect in a modern arena. When people are on line waiting for food they completely obstruct all walking. Forget trying to eat during the end of a period. It’s chaos. It’s unacceptable and makes for a weak and uncomfortable experience. You can’t roam this arena and enjoy yourself because you feel trapped, lost and unable to navigate thoroughly.

3. Off-centered scoreboard: Another casualty of playing in a basketball arena. They’re not going to fix this, so get used to looking at something that’s not directly over center ice.

2. Obstructed views: There’s nothing like sitting in an arena only to have metal bars and other fans blocking your view. There are countless views in the arena blocked by parts of the seating stanchions and it’s inexcusable. It’s not just one section or one level either, it’s multiple areas all around the arena and it’s going to turn a ton of people off after they spend good money to watch a game.

1. The commute: Sure I’m driving from Suffolk County so it’s not going to be easy, but boy do I now appreciate a 45-minute drive on the Southern State. I commute to the city enough on the Long Island Rail Road, and I really have no desire to do it recreationally or even to cover games at night aside from my other writing/journo gigs. But I will when it’s for work. Will others when it’s for their own enjoyment?

I left the Barclays around 8:45 p.m., while the game was still going on, to see if I could catch a train and get home at a reasonable hour. Didn’t happen. By the time I walked to Atlantic Terminal the next train to Jamaica was 9:55 p.m., and then I couldn’t get back out east until a train arrived at 10:30 p.m., which means it was a long and miserable commute home for a pre-season hockey game with little significance.

Let’s hope the LIRR considers adding express trains on main lines—i.e. Ronkonkoma or Huntington—straight to Atlantic Terminal, and back home on game days. The Isles and LIRR should also consider giving season ticket holders train vouchers just like they provide parking for them now at the Coliseum.

What now? Bruce Ratner said the Islanders wouldn’t play more than five or six games a year at a renovated Nassau Coliseum after the franchise moves to Brooklyn. The renovations won’t be done until 2016. Conveniently that statement was released shortly after the Barclays game when most diehard Long Island residents felt a majority of what this column resonates.

Here’s a thought: if the Islanders are going to play a handful of games in Nassau anyway, won’t most of the average fans only go to those games and not Brooklyn? How many people actually go to more than five or six games a season as it is? These questions will be answered soon enough. The next two seasons should be interesting.

The Islanders open the 2013-2014 season later this week. Stay logged into the Orange & Blue Blog for weekly updates about the boys from Uniondale.

Did you make the trip to Brooklyn for the Isles’ first game there? Sound off below and share your thoughts.