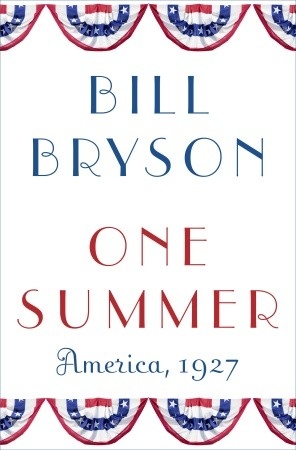 For starters, May graduations spilled into June. There were reunions, a July vacation, cookouts in August, work and yard work, ball games, kids’ activities, conferences and yikes, your summer was over before you had a chance to enjoy it.

Yep, it was too short—but just how meaningful was it? In the new book “One Summer: America 1927” by Bill Bryson, you’ll read about five warm, highly influential months in history.

In the spring of 1927, the biggest rivalry since World War I waged over the Atlantic: France and the U.S. vied to see who could cross the ocean in an airplane first. Daredevils lined up to attempt it; some died trying.

There was good news for more staid individuals, however: The Literary Guild started their by-mail bookclub in May of 1927, it was newspaper’s “golden age,” and faux-news tabloids were all the rage. It was a good time to be a reader—especially since TV transmission wasn’t accomplished until later that year.

Certainly, baseball was America’s Game then, and the friendly competition between Babe Ruth and Lou Gehrig was on every sports fan’s mind that summer of 1927. People debated over who was the better batter but Harry Stevens, an Englishman, made more money from baseball than did either of them.

Money was a big consideration when four bankers met in New York “under a cloak of secrecy” in July 1927. Nobody knows exactly what they discussed, but it’s believed that their decisions led to the Great Depression. President Calvin Coolidge was warned about the crisis to come but because he’d decided, that summer of 1927, not to run again for president, he passed the proverbial buck—though not before taking time to dedicate the new Mount Rushmore.

Trials were speedy in the summer of 1927 but the majority of murders went unsolved (including ones committed by the U.S. government). Henry Ford enjoyed good ideas in Detroit, but made bad ones in Brazil. Boxing and “speakies” attracted crowds, Prohibition made them break laws, and a thin, gangly young man named Charles Lindbergh flew into history…

At first glance, you’d be forgiven for wondering why author Bill Bryson chose to write a book about a few weeks in 1927. No wars occurred. No charters were signed. It was just another year, almost 90 years ago.

But bite into this brick of a book, and you’ll see that “One Summer” is no ordinary story because that was no ordinary season. Bryson, who is a master of humorously wry understatements, takes readers on a meaningful meander through April-to-September when, it seemed, everything happened. We’re given a lively history in perspective, tickled with sneaky observations and small asides, and presented with a little pop-culture something for everyone. I loved every paragraph.