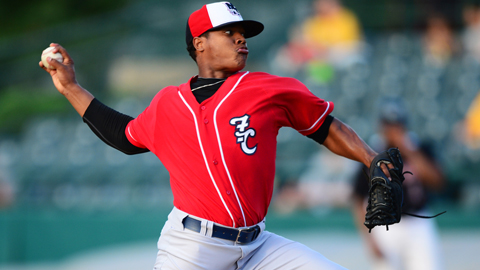 Former Patchogue-Medford standout Marcus Stroman is currently playing in the Arizona Fall League as a member of the Salt River Rafters.

Stroman, one of Major League Baseball’s top 100 prospects, was drafted in the first round by the Toronto Blue Jays in 2012 and spent last season with Double-A New Hampshire where he was 9-5 with a 3.30 ERA in 20 games.

Expected to pitch out of the bullpen as his professional career progresses, he is exclusively seeing relief appearances this fall. So far he’s 0-1 with a 4.50 ERA in two innings pitched.

The six-team Arizona Fall League consists of Triple-A and Double-A players from all 30 Major League teams. It provides players an extended portion of the season if they weren’t called up to the big leagues in September or for the playoffs.

Stroman missed the first month of the season as part of a 50-game suspension for using a banned substance that carried over from last season. The extra work this fall can only help his stock heading into spring training next season, where he’ll look to start at Triple-A at the very least and eventually make his big league debut.