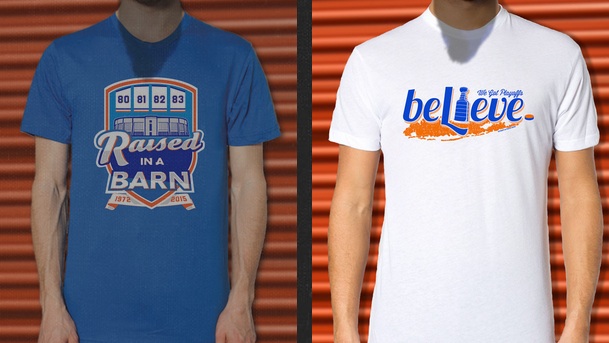 If you’re a Mets fan and live anywhere but under a rock you should be familiar with “The 7 Line” apparel company. Their niche model of digital commerce has taken Flushing by storm and united the Orange & Blue with their Stay True motto and mindset.

The folks at Tristate Cooperative are bottling that hardcore fandom and creative savvy with the Islanders.

Founded in March 2012, their mission, “was to bring true diehard art and apparel to an under represented yet incredibly loyal fan base,” said Timothy MacMahon, Creative Designer at Tristate Co-Op. “We wish to fit a niche for a community that deserves to proudly represent their home town team and their local community with a flavor that’s 100 percent home grown.”

A pharmaceutical sales manager at QK Healthcare by day and pizza maker at Carlos Pizza Oven by night in Riverhead, N.Y., MacMahon somehow finds time in his day to support his local hockey club with the apparel business.

“With the Islanders designs we draw our inspiration from anything and everything going on with the team at any given moment,” he said. “Whether it’s going off of a player’s personality trait, roles on the team, or simply things we would like to see represented but never do.”

MacMahon, 27, is just old enough to remember the Islanders days of playing on Sports Channel, wearing white home jerseys and Jiggs McDonald on the call, not Howie Rose. He remembers taunting his grandfather, a Rangers fan, after the blue shirts would lose.

“I was all about the orange and blue,” he said. “I love telling the story of how 5-year-old Timmy would call him after a Rangers loss and taunt him with, ‘hey Grandpa, hey Grandpa…1940!’ My Grandmother would say to him, ‘you do know you just hung up on a 5-year-old, right?’ Grandpa would reply dejected, ‘you don’t know what he was saying to me.’”

So it makes perfect sense that MacMahon leads a group of Islanders fans today that bleed Orange & Blue and literally wear their colors proudly on their apparel.

Their latest tee shirt release, “Raised in a Barn,” is one of the most eye-catching in their digital marketplace. It’s simple, “yet layered in so much meaning,” he said.

The shirt depicts the Nassau Veterans Memorial Coliseum in all its glory with Stanley Cup banners hanging above the floating building and 1972-2015 inscribed at the bottom of the design.

“What I have found is that every design has a fingerprint that’s unique to our process of all three of us working together,” MacMahon said. “Our graphic designer, Kim has an uncanny ability of bringing our ideas to life better than we could have ever imagined. I guess you could say we have Moulson-Tavares like chemistry.”

Other deigns include a “Knight of the Isle” shield to honor Isles resident badass Matt Martin, a ode to Isles net-minding legend Billy Smith via the “Hatchet Man” sweatshirt, and a brilliantly shaped “Dynasty Helmet” image that captures the names in franchise history in one compact look. There are more, all ripe with a spirit only known those who call the massive white building just beyond the entrance to the Meadowbrook Parkway their second home.

“When we launched we were told we were insane to make shirts for ‘a team with only five fans’ and since we were already a trio, a customer base of two just didn’t seem sustainable,” said MacMahon. “We found through our growing pains there really is an amazing community of Islanders [fans] out there like us and we are extremely grateful for the support they give us. Without this fan base we would never be able to do what we do.”