In decades past, duck farms flourished on the East End and turkeys, chickens and geese strutted all over Long Island. These days, the area is not without feathers, but only one large duck farm remains of the 90 or more that thrived here in 1940. Still, in this festive season of roasted poultry, anyone who wants a locally-raised bird for the holiday table can find one reasonably close by.

The Pekin duck, the one for which Long Island is famous, came to the United States from China in 1873, according to a history of duck farming by the Suffolk County Department of Planning. Meatier and faster-growing than previous varieties, these ducks found an ideal home on Long Island’s sandy shores. The climate was fine, the grain to feed them was plentiful and transportation to New York and other markets was easy.

Though the Eastport and Riverhead areas had the most duck farms historically, commercial farms sprouted up as far west as Rockville Centre, Wantagh and Amityville. Production peaked around the late 1950s and early 1960s, when 7.5 million ducks were produced each year for markets around the country.

Then came rising costs, competition from the Midwest—where most ducks are raised now—environmental regulations and other factors that started to kill off the farms. In 2011, the Jurgielewicz Duck Farm in Moriches, at the time one of two surviving large duck farms in the region, closed its doors.

The other was the Crescent Duck Farm in Aquebogue. “I don’t want to be the last guy left,” said Douglas Corwin, who now runs the farm that his great-grandfather founded in 1908. Corwin breeds, hatches, grows and harvests a million ducks a year, buying some 50 tons a week of corn, alfalfa and other grains from local farmers. His ducks are now kept inside a large barn, though they can walk around and are not kept in cages (“free-roaming,” as opposed to “free-range”).

Smaller farms with fowl of different feathers are flourishing, too. Eileen Iacono’s father-in-law bought an East Hampton farm in 1930 that her husband, Salvatore, turned into a chicken farm in 1948. “He wanted to farm year-round and you couldn’t raise vegetables in winter,” she said of Salvatore’s reason for starting to order day-old chicks from Pennsylvania. “They were shipped through the post office, a few thousand each year.” They later added ducks for the holiday season, about 100 for the period between October and the New Year. They raise Muscovy ducks, which are leaner and slower-growing than the Pekin, taking four to five months to reach maturity, compared to about six weeks for Pekin ducks. Both types of birds roam outside in fenced-in areas, though coops shelter the chickens at night to protect them from foxes.

A rustic shop that faces Long Lane is attached to one of the hen houses where Iacono greets customers who buy her chickens, eggs, homemade goods and other items. In a back room, visible from the store, her son and a helper cut up the chickens that were killed the day before. The farm is close to the busy village of East Hampton but seems about a century away. The street is an extension of Newtown Lane, the posh shopping street, and it gets very rural just past the high school. Iacono figures she has probably had many celebrity customers, but the only one she recognized was Lauren Bacall. “She was very nice. We just talked, that was it. Nothing fancy.”

Another family-operated poultry farm that started around this time is on Cuba Hill Road in Huntington, amidst upscale suburban homes. Back in 1948, the area was rural, according to Michael Makinajian, who now runs Makinajian Poultry Farm with his sister Christina. Their sister Victoria bakes goods sold in their on-site store, working in the basement of the 1860 farmhouse where their grandmother Regina used to candle, wash and box the eggs produced on the farm.

Their grandfather, Joseph, purchased the six acres and in its early days, though he continued to work as a projectionist in a Manhattan movie theater, got up early to feed the chickens. Back then, chickens and eggs were shipped to Manhattan, as were those from neighboring farms. But, “Once these giant farms started up in the south, keeping millions of birds in cages, people could get their eggs cheap,” Michael said. Now the farm sells rotisserie chickens, brown and white eggs from Golden Comet and White Leghorn chickens, produce grown out back (all organic, using their own compost) and other items, including the baked goods made in the farmhouse. Nearly all the sales are retail. “We still have the poultry running around. We sell ducks and geese, turkeys and chickens.”

Chickens are Makinajian’s year-round sales leaders, going at about 200 a week, while the other three birds sell briskly only during the holiday season. The work is hard, he said, “all day, every day. That’s the way, that’s the life. But I absolutely love it.” Seeing customers happy makes it worthwhile: “I like it when people say, ‘I’m so glad I found you!’”

Nassau County has even fewer rural pockets than Suffolk, but Zorn’s, on Hempstead Turnpike in Bethpage, at one time raised poultry on its own 10 acres there and on eight farms scattered throughout both counties, said Merrill Zorn, the current owner. Her great-grandfather, a butcher from Germany, started the farm in the 1930s as a wholesale chicken operation. In 1940 he decided to go retail, specializing in turkeys. Later, he added other items and became a pioneer in the take-out business, primarily chickens. Now Zorn’s operates on four acres, with its chickens, turkeys, Cornish hens and ducks grown elsewhere for the store. “Ours are fed naturally and grown longer,” Zorn said.

The biggest turkey farm on Long Island, and the second biggest in the state, is Miloski’s Poultry Farm in Calverton. Will Miloski, who died in January at age 88, started the farm in 1946 after working at his family’s Clearview Poultry Farm, also in Calverton, said his son Mark. Mark now runs the 25-acre Miloski farm with his family, selling 4,000 turkeys a year along with chickens, ducks and exotic meats like venison, elk and buffalo. In the 1970s, they still sold some poultry wholesale but are now totally retail. The mature gobblers live outdoors and are fed well. “If you skimp on their diet, they won’t be as good.” Business is on an upswing, he added. “It all goes in cycles.” And he has no plans to tinker with “how we raise the turkeys. People like them the way they are.” 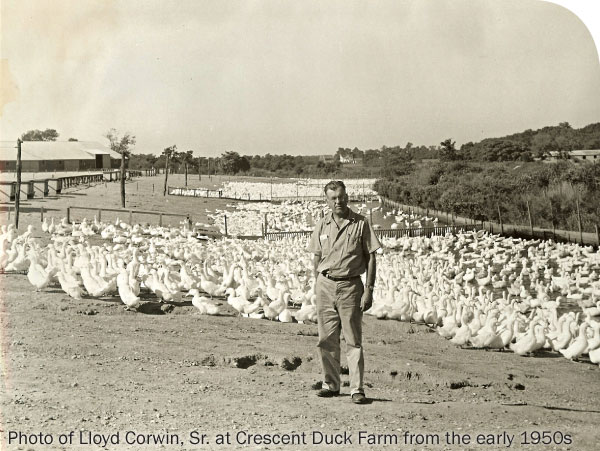 Farm-raised fowl
With the mother of all poultry holidays approaching, elevate the meal from a bland bird to one fresh from a local farm.

Iacono Farm, East Hampton
The family farm focuses on chicken year-round, but offers Muscovy duck for the holidays on their seven-acre farm. Order in advance to secure one. (631) 324-1107

Makinajian Poultry Farm, Huntington
Give the family running this farm two weeks notice before picking up a duck or turkey for the holidays. They also grow produce like berries, lettuce, kale, tomatoes and eggplant. (631) 368-9320

Miloski’s Poultry Farm, Calverton
Famous for their turkeys, Miloski’s also counts chickens, ducks and geese as part of the 4,000 birds raised on the 25-acre farm. Don’t need a whole bird? The poultry is also available in parts. Holiday orders aren’t accepted—it’s a first-come, first-served basis from the Saturday before turkey day until the day before. (631) 727-0239

North Sea Farms, Southampton
The King family farm will process an order up to a week before Thanksgiving for a turkey from 12 to 25 pounds. Like Miloski’s, this farm sells poultry parts. They also raise chickens, sell eggs and seasonal produce like eggplant and kale. (631) 283-0735

Raleigh’s Poultry Farm, Kings Park
Raleigh’s raises a few hundred chickens, turkeys and ducks on the 22-acre farm. They add goose and ham for Christmastime and offer fresh eggs, seasonal produce, organic milk, honey from their bee farm, jams and jellies. Orders can be placed up until a week before the holidays. (631) 269-4428

Zorn’s, Bethpage
Best known for their fried chicken, Zorn’s started as a poultry farm and today keeps that tradition going with a market at their Bethpage location for their chickens. Ordering for the holidays runs up until the day before each holiday or until they reach capacity of orders. zornsonline.com 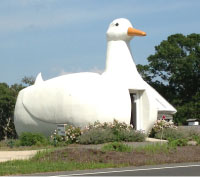 From 1916 Until its destruction by the 1938 “Long Island Express” hurricane, the Atlantic Duck Farm in Speonk was the biggest duck farm in the world.

In 1931 Martin Maurer, an enterprising farmer in Riverhead came up with a flashy way to advertise his business: He built the 20 foot-tall, 30 foot-long edifice now residing in Flanders and known as the Big Duck. What was once Mauer’s store is now a symbol for Long Island and famous in its own right.