Respect and restraint. That’s what it takes to cook Italian food well. It’s a style of cooking that evolved through family recipes as they’ve been handed down through the generations. It’s not about complicating things with unnecessary flavors, it’s about emphasizing honest ingredients over fussy techniques. Although a lot of restaurants serve Italian food, rare is the chef who understands the control it takes to treat a simple dish like pasta correctly, allowing it to be the star rather than an afterthought to a pool of sauce. “I try to keep dishes to three flavors, ones that will work together and give a balanced palate,” chef/restaurateur Eric Lomando said. “I get aggravated when I sit down to eat and there is a sprig of rosemary on my plate because I can’t eat it—I can’t chew on rosemary, I don’t think anyone can.”

If this approach seems onerous it shouldn’t, considering Lomando’s take on cooking and his focus on traditional, rustic Italian dishes. “People tend to push cooking as an art form and I tend to look at it as more of a craft,” he said. “There is an exactness to it that I enjoy.” Some chefs revel in the creativity of marrying uncommon flavors or pushing the culinary boundaries. But for Lomando the real satisfaction comes from perfecting an old world dish, like bucatini carbonara or pappardelle Bolognese—tasting it 15 times a night and knowing each plate is consistent.

He holds true to the style even though he now has the space to stray. Orto in Miller Place, Lomando’s latest restaurant, is larger than his two previous ones in St. James—he joked that the smallest, Kitchen A Trattoria, could fit into the walk-in refrigerators at Orto. Respect and restraint. Instead of using the larger kitchen to crank out haute cuisine, Lomando and his team use the space to honor tradition. That means making pasta by hand, scraping together headcheese and hanging traditional guanciale (cured, unsmoked bacon made from pork jowls).

Guanciale takes longer to make than pancetta, but it’s at the core of any authentic spaghetti all’amatriciana. Lomando’s team rubs about 75 pounds of jowls in a salt and spice mixture then lets it cure. “It’s something you treat like pork belly,” he said. “It’s got this incredibly deep, rich flavor.” That richness feeds the soul, the way simple peasant-style food always has—with fat and salt and the time it takes to transform simple ingredients. “I can’t think of a plate of food that is tastier than a cassoulet or a great pasta dish with great ragù. They are just very satisfying.”

As is often the case, the best things in life are the simplest. Lomando’s restaurants work because of this; the food is approachable and well done—which is not to say it’s easy. It’s hard to stand apart in a region where Italian food is ubiquitous. Then it’s the little things, like using guanciale instead of pancetta, that keeps a dish authentic when there is no copious ingredient list to hide behind. “I read a quote from Paul Bocuse once that said, ‘tradition is the future of cuisine’ and I definitely feel that that is true,” Lomando said. Respect and restraint. 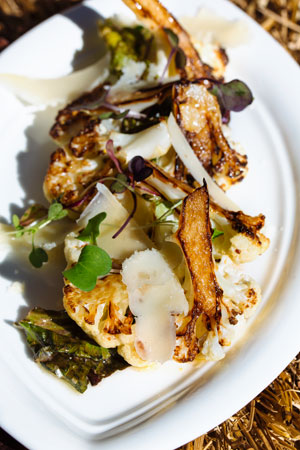 Sauté the cauliflower in a single even layer in a hot sauté pan. Do not move the cauliflower until the side in contact with the pan has caramelized. When a nice brown color has developed, flip each piece of cauliflower and brown the other side.

While the cauliflower is browning prepare the dressing. Melt butter in a saucepan with garlic and anchovies. Cook until it extremely fragrant but has taken on no color. Then whisk in vinegar, oil and mustard.

Once the cauliflower has colored nicely and become crisp, move them to paper towels to drain then to a serving bowl. Add romaine and dress with warm vinaigrette. Garnish with shaved cheese.