Considering a centerpiece for the dinner table can evoke visions of grandeur and, when it comes to execution, a bit of anxiety about having yet another thing to worry about when planning a special occasion. Perhaps the temptation to go without one or use a store-bought version worked in years past, however the dining room or buffet table are not only places to serve a meal, but also opportunities to express the mood of the season or occasion at hand. Today’s most interesting table toppers speak a relaxed, effortless language sans the stiff formality of dinner parties past. Follow a few loose guidelines and infuse a good amount of personal flair and creativity for a show-stopping centerpiece.

Composition
Traditionally, centerpieces have been made up of everything from flowers to food to candles. The Romans used decorative foliage, vases and ceramics to adorn their tables. In the Middle Ages, the aristocrats’ tables were so abundant with food there wasn’t room for a centerpiece except at Christmastime when they placed platters of pastry and marzipan in the center. The 18th century brought the use of fancier materials such as mirrors set beneath porcelain figures and taller, vertical displays of food in pyramids or on tiered plates. The 19th century was the era of flowers and candelabras. By the 1900s, centerpieces took on more of a themed approach culminating all that came before:

Decorative objects that coincide with holidays followed by the return of food-centric displays and a celebration of nature with all types of flora (especially during the ’60s and ’70s). Today, a centerpiece is typically made up of three key components: An organic element, a decorative aspect and a light source. 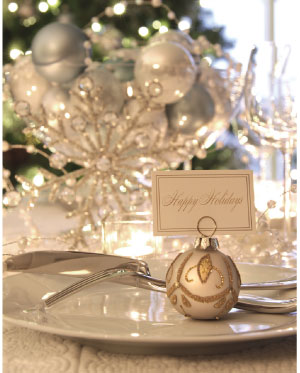 For everyday use, just one of these elements can stand on its own. Examples of this trifecta are an ornate rectangular tray with a short row of alternating votive candles and mini potted succulents, a tall trumpet vase with branches filled with white lights and a large, clear vessel filled with red delicious apples flanked by two candle hurricanes.

Scale and Proportion
The right scale and proportion is the first step in nearly any successful design. This relationship between form and function is just about the only hard rule to follow in order to render a focal point that correlates to the size of the table, which should take cues from the size of the dining room. Assess the space in terms of room size, ceiling height and the size and shape of the table. If these elements are on the larger size (a room bigger than 12 feet with a table longer than 94 inches) then the centerpiece should be prominent with a single design about 3 feet wide or two or more smaller offerings each less than 18 inches wide. Bear in mind the amount of space being used on the table as well as the height of the display to avoid obstructing interaction across the table.

A table measuring six feet or longer in length can handle a centerpiece up to 2 feet long or two coordinating displays set 2 feet apart from the center. Creating with symmetry or asymmetry is often a matter of personal preference.

It’s Illuminating
Visually, the most important relationship is the one between the centerpiece and the lighting fixture above it. If the chandelier is striking, then the centerpiece should not upstage it but instead play a supporting role. Should the lighting fixture be ordinary or flush-mounted to the ceiling, then a tall, eye-catching centerpiece will ignite the room. The chandelier’s style and shape, from round to oval to rectangular or asymmetrical, should direct the footprint of the centerpiece. The direction of the room’s light fixture guides the centerpiece’s design as well. Chandeliers that cast light on the ceiling, instead of down onto the table, might call for a second light source on the table in the form of candles in holders of all heights and widths.

A beautiful centerpiece is an aesthetic “must” when entertaining to the fullest this season. But everyday living also calls for a pleasing display—a barren table is always less inviting than one that catches the eye.