The notion of an evolving art “scene” of specific time and place is a precarious notion. What makes them? What destroys them? Do they really exist at all?

If a scene can be defined by that nebulous vibration, the palpable impression that things are happening with urgency and skill, then Brooklyn is bubbling to the surface as a current zeitgeist of canvas bled dreams. And the Brooklyn scene is coming to the Hamptons by way of two prolific painters.

Robert Szot’s works are dances with form and the elusive lightness of being. Karl Klingbiel’s intense, kinetic abstractions serve as thoughtful counterpoint to Szot’s airy feel. These Brooklyn-based painters form the two headed monster featured in Left Bank Brooklyn, an exhibit at Lawrence Fine Art in East Hampton this month.

“I knew that there was a strong concentration of galleries and talent in Williamsburg,” said gallery director Howard Shapiro about researching and curating the show. “But I soon discovered that other neighborhoods in Brooklyn had become magnets for artists, galleries and really good art. Both [Szot and Klingbiel] are artists’ artists. They are serious and live for the idea of creating.”

Originally from Houston, Szot was a journalism major who never took an art class in his life. Once turned on to Egon Schiele and Mark Rothko, he became consumed with the world of abstraction and the notion that he could come to New York to be a painter. What started out as idealism has steadily evolved into true grit. Szot’s works, so peaceful and free-floating, belie the workingman’s Taoism that goes into them.

“I’m enamored with the hard work it takes to execute these paintings correctly,” said Szot. “At some point you stop doing a thing and start becoming that thing. I think about working. I don’t think there is anything out in the world that’s waiting for me to find it, I think it’s more important to add to the world and not wait for the world to hand you answers. There are no answers outside of what you construct.”

Szot’s soft elegance and muted whimsy stand out in Special Music, a meditation that bubbles quietly, evoking serene contemplation. At first glance, hunched musicians take shape as clouds of salmon, sand and soft reds only to morph into desert rock formations rooted in the rhythms of sacred earth. In a broader historical context, Szot’s free-floating dreams are the soft landing to Dali’s precipitous nightmares. But this ease is hard-earned, the seamless result of Szot’s tumultuous process.

“It isn’t natural for me to see whimsy and lightness in one of my paintings because they tend to be quite argumentative when I’m working,” said Szot. “My process is kaleidoscopic in nature where one decision leads to five or ten others, and those decisions must be addressed or eliminated in order to reach a greater conclusion.” 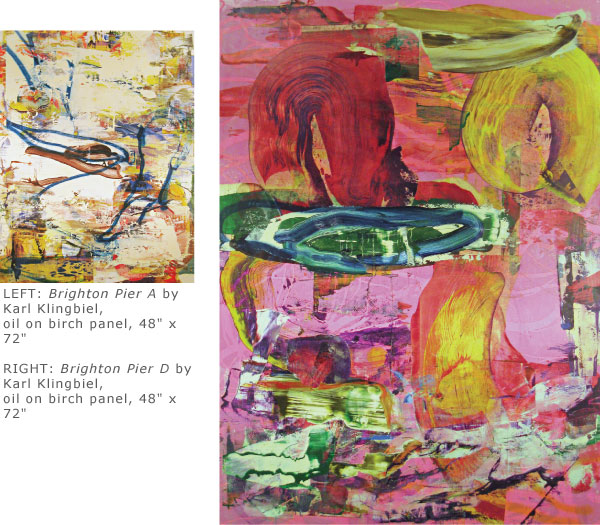 Klingbiel’s Brighton Pier series invites a more intellectual reading, though no less visceral and engaging. Rich swirls of color vacillate between soothing and scorching, giving way in gradual curves and lines to grander designs—and their failures. They seem to imply man’s effort to make memories, only to see those memories melt away, leaving disappointment in their wake. But subtextually, through movement and colorful brilliance, a shred of hope remains.

“Brighton Pier [a once well-known amusement park in Brighton, England—now shoddy and rundown, think Asbury Park at its worst] struck me quite powerfully as a very concise expression of the human condition,” said Klingbiel who, as a Detroit native, understands the emotional dichotomy of despair and the irrational optimism that often underlies it. “I saw [the Piers] as a kind of virtual simulacrum of the world at large: One of past glory, false promise, a kind of willed, Potemkin reality, both social and physical. The paintings are intended as a portrait of the failed idealism of our constructed reality, yet one with latent idealism and hope nonetheless.”

Like the vibrant Paris of Picasso and Chagall in the early 20th century, Brooklyn’s ongoing cultural renaissance is a confluence of time, space and experience. Brooklyn provides a frenzy of opportunity, exposure and vibrancy for artists, but as it grows, Szot fears the scene may start cannibalizing itself, if it hasn’t already.

“I’ve worked in Brooklyn for the last 11 years, in all different parts. I can tell you that it is a coin flip,” said Szot. “I mean there is so much access, with educated communities hungry for culture and art. There is also space to work and a growing community of real galleries that care about reputation and concern themselves with exhibiting important work. The other side of the coin is that it isn’t a secret anymore; it hasn’t been for a long time now. So people come here which is good, but artists and their studios get booted for condos.”

Klingbiel finds the Brooklyn experience to be somewhat more diffuse—he’s not entirely sure where the Manhattan art scene ends and the Brooklyn scene begins. He can sense the Brooklyn sands shifting under his feet; momentum shifting from Williamsburg to Dumbo to Bushwick, where Klingbiel is currently building a studio. It’s a sense of movement and socio-cultural change that mirror his intentions, but do not influence them directly.

“Since I arrived in the city in 1983, I predate the Brooklyn art scene as we understand it today,” said Klingbiel. “I am looking forward to seeing how this part of the city evolves and I am excited that I will be living and working in the midst of it. Any artist has his or her practice, which I believe a private, existential one. I am an agnostic in terms of believing that a certain place at a certain time produces a cogent or explicable kind of work as a whole. It all remains to be seen.”

Pinning art to its time and place is comforting and good candy for the mind’s eye. But for the artist working in the moment, whether it be turn of the century Paris or contemporary Williamsburg, inspiration transcends all limitations. The most important place is the one inside the soul of the artist, who works simply to express himself. In this space, pure action is the roadmap. “Inspiration exists,” Picasso once said, “but it has to find us working.”