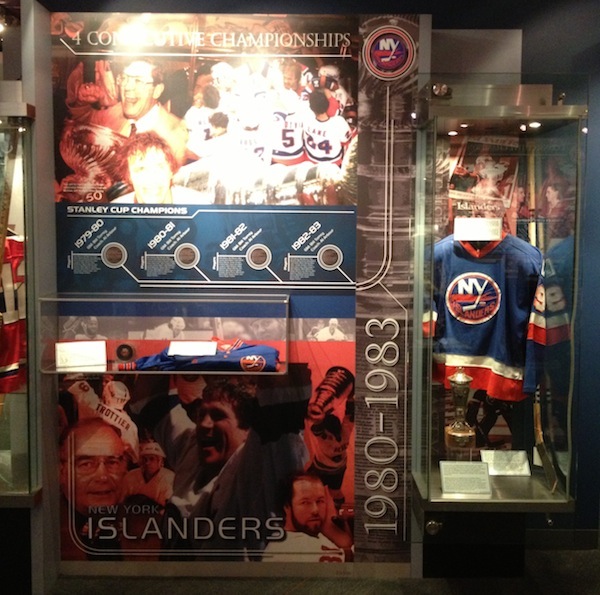 I took a trip to Toronto last week and made a point to visit the Hockey Hall of Fame for the first time. It completed my visit to the four major sports hall of fames in North America.

It was a primary focus of mine to spot as many Islanders items and names as I could on the walls and in the showcases of the Hall. I figured the dynasty years would be covered nicely, and I was right. I also figured there wouldn’t be much of the current team mentioned aside from the obligatory showcase that each team receives, and I was also right.

The Islanders are one of only a few dynasties featured in the champions’ section of the Hall. As you can see from photo above there is memorabilia, and historical information to honor the Isles’ dynasty years from 1979-1983.

Pat LaFontaine had a big display case in the main walking area of the Hall and is part of a rotating group of players known as “legends,” who have some of their equipment and records/stats featured and highlighted in grand fashion.

Isles legend Denis Potvin had the same treatment as LaFontaine and then some. Aside from the “legends” display, there is also a large wall sign displayed to honor his captaincy of four straight Stanley Cups.

Bryan Trottier was listed as a “Fan Favourite” on one of the walls. There were a dozen or so players representing different years and eras who had special recognition like this.

Then of course the team was well represented on the Stanley Cup itself having won four straight cups in the early 1980s.

*Mention of the Isles on a media board that says their game against the Rangers on March 24, 2010 was the first hockey game to ever be broadcast in 3D