It’s just before dawn on Saturday morning. Time for a trek from Farmingdale to Cold Spring Harbor and back. Normally I’d drive… maybe Route 110 or Route 135. But I’m going to run, a round trip of about 30 miles.

Be patient, I think to myself as I jog the mile past the high school to meet up with the Nassau-Suffolk Greenbelt near the Southern State/Bethpage State Parkway interchange. Take it slow and steady. Don’t go out too hard. You have a lot of miles to cover. I turn north on the paved bike path, then switch onto the foot traffic-only trail that parallels Bethpage State Parkway before diving into the heart of the park. I have it all to myself at this early hour.

The miles tick by as the first rays of sun begin to filter through the trees. Hours later I skirt the edge of Stillwell Woods and reach the rolling hills that signal the final miles into Cold Spring Harbor. I spot the smooth-as-glass waters of the inner harbor through gaps in the trees. This is why I run trails.

My bottle’s empty and I’m desperate for calories by the time I pop out of the woods at the northern trailhead. I jog a quarter mile to the local deli and grab a Snickers bar and a big bottle of Gatorade. I top off my bottle and chug the rest. Then it’s back the way I came.

Kelli is probably sipping coffee at the kitchen table right now, I think. The girls are eating breakfast. Maybe they’ll have Belgian waffles with bacon and orange juice waiting for me when I get back. Just a few more hours. The miles roll by 18… 19… 20… My stride isn’t as smooth as it was earlier, but I plod along. Nature calls. I duck into the woods then resume my journey homeward.

The trails and bike path are awake with people. My ego rears its head: They have no idea how long I’ve been out and how far I’ve run. It doesn’t matter. Eventually, around noon, I reach home. The rest of the weekend can begin.

It’s November, which for many runners means only one thing: The 26.2 mile-long ING New York City Marathon. With a starting field of 47,000, it’s one of the largest marathons in the world. It’s also one of the most prestigious. For many, it’s a bucket list long-distance race and the pinnacle of running season. But for another breed of runner, the joke—with no disrespect meant a marathoners—is often that a marathon is a warm-up run, a casual part of each weekend while training for something bigger. The ultramarathon.

Ultras, for short, refers to any race longer than a marathon, including the common distances of 50k (31 miles), 80k (50 miles), 100k (62 miles) and 160k (100 miles), as well as time-based events that last from 6 to 24 hours or longer. Probably because of the seemingly absurd times and distances involved, ultrarunning has remained the passion of a small, semi-crazy subset of the greater running world.

But participation in ultras has experienced exponential growth since the late 1970s. Publication of best-selling books such as Ultramarathon Man by Dean Karnazes, Born to Run by Christopher McDougall and Eat and Run by Scott Jurek have vaulted ultrarunning into the spotlight and more runners are dipping their sore feet in the ultra waters than ever before.

And Long Island played an important part in the evolution of the sport. Greater Long Island Running Club (GLIRC) president Mike Polansky called Long Island a hotbed for the sport. One of the region’s first ultras dates to the late 1980s, he noted. It was a 12- and 24-hour event at the Syosset High School track. Later came races such as the Greenbelt Trail 50k, which tackles the path between Plainview and Cold Spring Harbor and claims about 50 finishers. Then there’s the Caumsett State Park 50k, which celebrated its 11th running earlier this year in Lloyd Neck on the North Shore and saw about 150 finishers. Caumsett, more than any other race, has propelled Long Island ultrarunning to national prominence. Thanks to the race’s status as the USA Track & Field national 50k road championship, it’s been drawing some of the best long-distance road runners from around the country since 2006.

Plenty of local runners are getting in on the ultra act too. Consider Nick Palazzo, organizer of the Greenbelt Trail 50k. In 1998 for example, he completed the grueling ultrarunning Grand Slam, finishing four of the nation’s toughest 100-milers in California, Vermont, Colorado and Utah between the last week of June and the first week of September. In its nearly 30-year history, just 254 people have accomplished the feat, four of them from New York. On the women’s side there are runners such as Jodi Kartes-Heino from Quogue. She’s a regular—and frequently a winner—in the local Grand Prix series. She’s also logged a number of top ten finishes when she’s ventured farther afield.

Long Island’s top ultrarunner however could easily be Byron Lane, an elementary school teacher from Stony Brook. Since his first ultra in 1989, he’s racked up more wins and podium finishes than many runners have races at all. It’s all the more impressive considering his incidental running roots—he started running at age seven, forced by a father looking to get his overweight son out and exercising. “He took me to the high school track to run one mile after work every day,” recalled Lane. A few months later, he beat his dad for the first time. A short stint with soccer followed. But Lane found his way into track and cross-country in junior high school and stuck with it through college. His most impressive accomplishments though, have come since the turn of the millennium. In the fall of 2000, he ran the entire length of the 125-mile Paumanok Path from Rocky Point to Montauk Point. Lane planned the run with the help of Long Island trails advocate Ken Kindler, running sections of the route with his friends and training group before finally tackling the entire length of the trail in October that year to (incredibly) relatively little fanfare.

Surprisingly, being an elite runner isn’t a prerequisite for dabbling in ultras, quite the opposite. For one, it soon becomes clear that ultrarunning has historically been a sport for “mature” runners. Lane and Kartes-Heino are in their 40s. Palazzo is in his 60s. Helma Clavin, a regular at local races from Lake Ronkonkoma, is now in her early 70s. “You can’t go fast anymore, so you go long,” joked GLIRC’s Polansky, who himself is now 72.

And now that younger runners in their 20s and 30s are likewise flocking to the sport, another theme emerges: Ultras are about ordinary people doing extraordinary things.

Lane is a case in point. In 2008 came his self-described greatest accomplishment: Winning the US 24-hour national championship with a distance of 125.2 miles. “To start out not really enjoying running, doing it because Dad made me do it and saw a need to help me, and to end up being the best in the country one year was amazing,” said Lane. And what’s the secret to his success? “It’s definitely not my natural ability,” he said, pointing to the mental aspects of ultrarunning and the patience and dedication to training it requires.

Preparing for an ultra demands commitment and investment. You can’t fake your way through a 50-mile or longer race. There are no six week, couch-to-100-mile training programs online. Progress is slow and steady (much like the races themselves), with weekly training increases ideally restricted to no more than ten percent to prevent the often avoidable types of overuse injuries that can plague ultrarunners.

For his part, Lane has been experimenting with a new training program lately. But for 20 years he ran an average of six days per week, with plenty of variety in the program: Two long runs, including a three- to five-hour, 20 to 30-plus mile run on Sundays; three or so easy, one-hour runs; and another one or two hard runs, such as hill repeats or a track workout.

You can’t fake your way through a 50-mile or longer race. There are no six week, couch-to-100-mile training programs online.

All that, every week. Another local runner, 34-year-old Vinny Cappadora from Deer Park, tries to run at least an hour per day. Unlike Lane, who focuses almost exclusively on road running, Cappadora does at least 70 percent of his training on trails and bridle paths. When he has the time, he’ll run for three or four hours at a clip, totaling some 10 to 20 hours of running per week. Both Lane and Cappadora incorporate the common denominator of all ultrarunners’ training programs: The long run, which by necessity almost always takes place on the weekend. Cappadora even does much of his training at night, though many ultrarunners tend to opt for early morning runs. 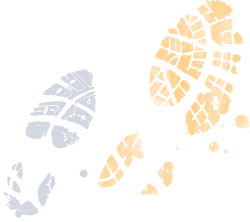 Cappadora followed the common marathon-to-ultra trajectory. He met his wife, 27-year-old Nichole, while training for a marathon. Then they read a Runner’s World article about “a guy running a 100-mile race,” he said. “I thought it was cool.” He signed up for his first ultra three years ago, the Virgil Crest 50-miler in New York’s Finger Lakes. “I ran that as a street runner,” Cappadora recalled. “Street shoes. Tank top. 8-ounce bottle in my hand.” He dropped out at mile 26. Since then he’s learned a lot, completing a number of local 50k races, several 50-milers and at last completing the 100-mile distance he’d first read about in Runner’s World. He also most recently became a race director with the Tesla Hertz Run, which took place on the trails of Rocky Point in October. It was Long Island’s first official 100-mile race on a 10-mile loop through the Pine Barrens.

Cappadora and company are evidence that this once extreme, fringe element on the margins of the running community has become increasingly popular. “When I started running ultras in the late 1980s, I was the only guy in the general area,” said Lane. “Now there are a lot of people, from 20-year-old guys to grandparents. I don’t know of any place within a couple hundred miles where ultrarunning has taken off so well. It’s nice having a local community right here and not being those weirdos who want to run all day.”

Long-Distance Fueling
Mom may have cautioned you to wait at least one hour after eating before a swim or run, but ultrarunners often eat just before—and regularly during—long runs and races. They’re burning too many calories and losing too many electrolytes to do otherwise. Most aim for consuming 200 to 400 calories per hour from a variety of liquid and solid sources including sports drinks, electrolyte tablets, energy gels and chews, salt potatoes, peanut butter and jelly sandwiches, chocolate, potato chips, chicken noodle soup, pretzels, pickle juice and even bacon. Seriously.