It’s a morning ritual in the kitchen at Stony Brook’s Pentimento where chef Dennis Young and his cooks crank out various fettuccini, fusilli and swollen gnocchi for the day. Although a noodle and its sauce might seem like an unscientific pairing based only on taste, some noodles are engineered for particular kinds of sauces. Take the folded cavatelli, covered with ridges designed to grip onto smoother sauces. “With that noodle, cream or tomato sauces work well but it won’t work for a meaty, chunky sauce,” Young said.

Imported, finely ground Italian “00” flour forms the backbone of the noodle and ricotta impastata—a whipped version closer in texture to butter than the watery supermarket staple—provides the richness. Clamped to the edge of a stainless steel table is a cavatelli maker that in one motion folds the pasta on itself and adds its distinct ridges, though they are easy enough to shape by hand. On the eve of an annual visit to Italy to research new dishes to add to his fall/winter menu, Young demonstrated the method he’s adapted for the home cook. 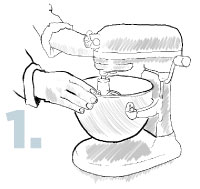 Make the Dough
Add all the ingredients into the bowl of a stand mixer fitted with a paddle attachment. Start mixing on low then increase the speed to medium, mixing until the ingredients are combined. 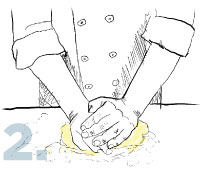 Knead It
On floured surface, shape dough into ball. With one hand over the other, press down and push away to flatten the far edge. Pick up flattened edge and pull back over top of the ball. Push down towards center. Continue push-pull technique until dough is smooth (10 min), rotating one quarter turn each time. Rest dough in bowl covered by plastic or towel for 15 min.

Shape It
Form the mound into a rectangle and roll the dough with a rolling pin until it is about 1/4-inch thick. Then slice the mass into 1-inch wide strips. 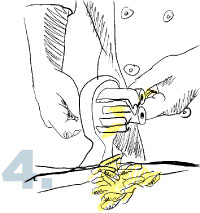 Crank It
Place a floured sheet pan under the crank to catch the pasta. Turn the crank with one hand while feeding the dough strip into the machine with the other. If serving immediately, toss the pasta into boiling, salted water and cook until the pasta floats.

In a saucepan reduce the cream to a 1/2c. over medium heat. Reduce heat to low and slowly incorporate cheese, stirring until melted. Toss with freshly cooked pasta.