Chosen as this year’s cultural ambassadors for the American Music Abroad program by the US Department of State, The Amigos Band began as a trio, The Tres Amigos, in 2009. The three friends—accordionist Sam Reider, guitarist Justin Poindexter and saxophonist Eddie Barbash—bonded over their love of a variety of American musical styles from bluegrass and country to jazz and folk.

“When it was just the three of us, we had to rely on each other a great deal to compensate for all the rhythm section instruments we were missing,” recalled Reider, who describes their style as Americana. “Justin and I traded off playing bass notes and Eddie learned to play the washboard. It was a balancing act that took an immense amount of practice and focus—two things that were only made possible because we’re great friends and enjoy working together. That’s where the name came from. And it stuck.”

The charismatic core three, who still take turns singing lead and engage in pitch-perfect three-part harmonies, are now backed by bassist Noah Garabedian and drummer Will Clark for a fuller sound. “We have more capability with the bigger ensemble,” said Poindexter. “We can really get a crowd rockin’ and play more danceable material and I think it becomes more participatory for our audience.”

In writing their full-length debut, Reider and Poindexter also took a more collaborative approach. “A lot of the songs were either my songs or Sam’s songs,” remarked Poindexter, “but when we started collaborating on them, I feel like the songs not only became stronger than they had been, but more than that, they became playable. They became something that really felt like an Amigos song.” 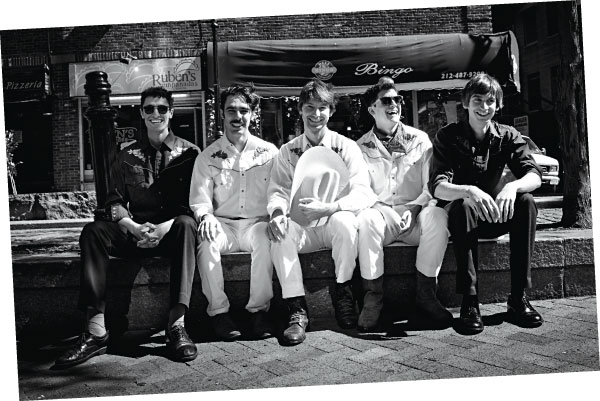 After meeting acclaimed musician and composer David Amram (who has worked with the likes of Dizzy Gillespie, Pete Seeger and Jack Kerouac) at an all-night party at a folk festival in upstate New York, the Amigos asked him to co-produce their record. “He’s not the one that’s turning the knobs on the console,” noted Poindexter. “He’s the one that’s getting us in the mindset, the one that makes something really beautiful that speaks to the tradition of American music. He’s such a living legacy of everything that’s happened in American music over the past 60 years that we felt like it was important to have this kind of mentor figure alongside us.”

Wanting to make an album the old-school way, the band was holed up in the studio for days on end with Amram and producer/engineer Devin Greenwood (Norah Jones, Langhorne Slim). The record consists of originals that harken back to Amram’s Beat Generation, along with fresh arrangements of folk standards like “The Wayfaring Stranger,” “Hey Joe” and “The California Blues,” a Jimmie Rodgers classic once adapted by Woody Guthrie. The Amigos Band’s version is a tribute to Guthrie and features additional lyrics by Reider, who grew up in the Golden State. “We set down a strong groove on this simple folk song,” recalled Reider, “and on top of that foundation, started a collective improvisation with Amram on penny whistle. The jazz improvisation that Amram helps us bring out is really amazing.”

The Amigos enjoy exploring all different genres with special guests and mentors they meet along the way. In their semi-regular “The Amigos Band Presents” series at Dizzy’s Club Coca-Cola at Lincoln Center, they’ve featured artists like jazz singer Nellie McKay and yodeling cowboy Ranger Doug (whom both North Carolinian Poindexter and Barbash, a Long Island native, idolized growing up). The next one takes place this month and features their spiritual guide, Amram. They will celebrate his 83rd birthday while showcasing music from the album, which will be released in January. Expect ensemble singing, dancing, matching Western shirts and bebop solos from the classically trained musicians who give it their all whether they’re playing schools, churches, festivals or venues big or small.

“The Amigos are role models for a whole new generation of musicians and listeners,” said Amram. “They’re brilliant improvisers and have so much collective positive energy that during the first 14-hour day I spent with them in the studio, I forgot that I will soon be 83. Their music… is for all ages from toddlers to my contemporaries, who will abandon the shuffleboard courts, come to hear them and go home feeling like a teenager again.”