Barry McLaughlin is arm-swimming in the trunk of his Prius, rummaging through two crates of beer tap handles.

“People see beer at a bar but they don’t know how it gets there,” he shouted. “That’s where we come in.”

McLaughlin’s title at Clare Rose Inc., the largest beverage wholesaler on Long Island, is Craft Beer Specialist. His objective within the five-employee division involves broadening the company’s portfolio of craft breweries and beer-educating colleagues and clients—Jon Kelly, Jennifer Galtieri, Michael Pellicano and Scott Pflug are also members. It’s only 10:03am, but McLaughlin has already visited his Melville-based office and delivered two samples of Victory Brewing Company Golden Monkey to an inquisitive proprietor in Huntington. He’s also responded to a seemingly perpetual deluge of emails and texts from, well, everyone. There is constant distraction, but as McLaughlin searches the mid-sized hybrid near Long Beach’s SwingBellys BBQ, his focus is evident. 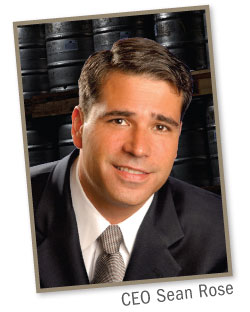 “I found it!” he said, clutching the handle for Kona Brewing Company’s Fire Rock Pale Ale. He slings a satchel atop his Blue Point Brewing Company-embroidered polo and delivers the lever, a slender strip of lava-spewing volcano, to Sean Sullivan, owner of Swingbellys BBQ, who is thumbing an inventory catalog for his next order.

After decades of big-brand dominance however, Rose observed a consumer shift toward smaller regional breweries dedicated to creative recipes and flavor-stuffed beers. “There is a fundamental change in the customer and now people want choices and big flavor,” Rose said. “There were only regional players 80 years ago and it’s slowly coming back.

We want to provide as many options as possible.” Rose’s solution includes the Craft Beer Specialists, a team of beer evangelists assembled to train driver-salesmen, educate businesses and expand its portfolio of specialty breweries. The latter, containing only Patchogue’s Blue Point Brewing Company in 2011, has swelled to 12 breweries, from Dark Horse Brewing Company, recruited by McLaughlin during a visit to Michigan, to Long Ireland Beer Company based in Riverhead.

And the biggest supporter, perhaps, is Rose.

The splash page of Clare Rose Inc.’s website features two decaled trucks—one adorning Budweiser and the other showcasing Blue Point Brewing Company—positioned to suggest travel in opposite directions. The visual could denote an antagonistic ploy attempting to divide consumers, but Rose denies favoritism toward one segment of beer or another. A corporate juggernaut measuring production in hectoliters must coexist, according to Rose, with a regional brewery operating within a former hockey rink in Patchogue. 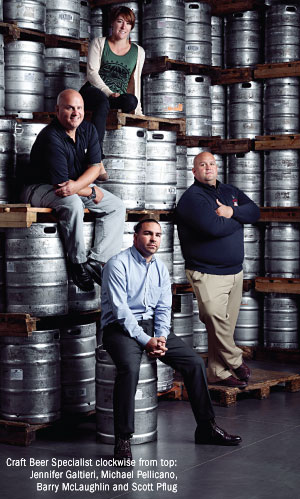 “We’re all water and hops, whether Budweiser or Blue Point, but craft has put fun back into the business and is pushing bigger brands to be innovative,” Rose said, referring to Bud Light Platinum, Budweiser Black Crown and other recent craft-ish attempts by Anheuser Busch-InBev. “A mixed bag is good for business.”

Pellicano, who previously worked for Boening Brothers, Inc. and Union Beer Distributors, joined Clare Rose Inc. in 2012. The benefits of selling macro and micro within the same portfolio are “infinite,” he said. “If it wasn’t for Bud Light at our accounts, we wouldn’t have a way to get in with a lot of places… Domestics will always have a place in the market, but it gives us an opportunity to push craft beer into newer markets and into the hands of new people.”

An honorary plaque hangs in Rose’s office amid a collection of portraits blurring distinction between family and business. It was presented at Starfish Junction Productions’ Golden Tap Awards Gala, an industry ceremony during Long Island Craft Beer Week this past May:

The Humanitarian Award is being given to recognize your efforts helping the Long Island community in a time of need after Hurricane Sandy. Thank you for your participation in creating Surge Protector.

Oceanside’s Barrier Brewing Company was battered by the calamitous storm in 2012, flooded with four feet of water and unable to make beer. Clare Rose Inc. possesses no contractual ties to Barrier Brewing Company, but helped the inoperable business and Hauppauge-based food bank Long Island Cares by funding and distributing Surge Protector IPA, a light and piney ale brewed by eight Long Island breweries. The collaboration beer, created at Blue Point Brewing Company, raised $58,000. As Rose discusses Surge Protector IPA, the influence of his grandfather and every small business aspiring for success, is evident. The true motive for creating his underdog-focused team of Craft Beer Specialists is also present.

“I believe in karma. And I’d like to think my grandfather had some help along the way to get where I’m standing right now,” said Rose. “The smaller guys always deserve a chance.”

According to Brewers Association, approximately 7.3 million barrels of beer were sold by small and independent breweries during the first six months of 2013.