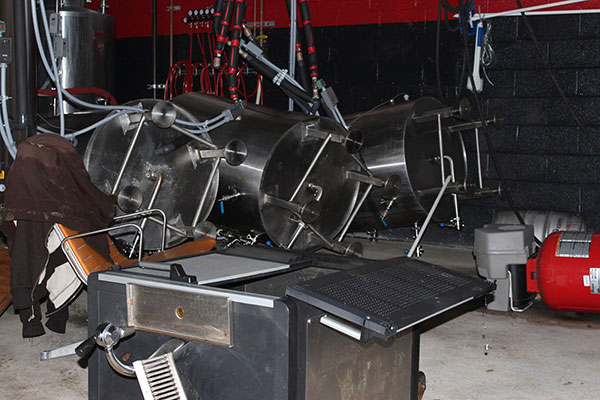 “It depends on the day,” said Evan Klein. “Sometimes it feels really long ago, but when I go home, I know my neighbor demolished his house last month, so it brings you back. It can still feel fresh.”

Klein, who owns Oceanside’s Barrier Brewing Company with Craig Frymark, is pouring a sample of Oyster Stout, a proprietary beer created for Brooklyn, New York’s Maison Premiere. He follows with its description, “a minerally stout with some calcium and chalkiness, but not really fishy,” before returning to the previous topic: Hurricane Sandy.

“We had a lot of support from everyone, though. It was overwhelming.”

This interaction occurred in Barrier Brewing’s new ROOM4TASTES, which features 15 growler-available drafts (a five-pour flight is complimentary for each patron) and a That ’70s Show-ish couch. Its launch, in September, is a tangible achievement for Barrier Brewing, as “a tasting room was the missing ingredient when visiting,” said Frymark. ROOM4TASTES is also a metaphorical trophy, however, representing a victory over adversity.

“It’s the cherry on top after all the rebuilding,” said Frymark. “This gives us an opportunity to connect with our customers more. A lot of them were also hurt by the disaster.” 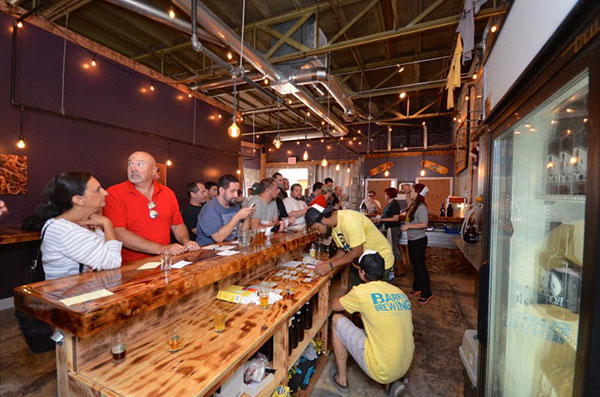 The opportunity to “connect with our customers more,” or simply exist, was jeopardized on October 29, 2012, as Sandy flooded and shutdowned Barrier Brewing. It destroyed equipment and ingredients, and deflated morale. It also damaged Klein’s residence in Long Beach.

Since reopening in January, however, the brewery is “stronger than ever,” said Frymark. This statement is primarily evidenced by the launch of ROOM4TASTES, but also supported by a continued rejection of regular. Klein and Frymark remain abstainers of flagships, preferring to swell their portfolio, which includes Bumble Double Wheat IPA and Morticia Imperial Stout, and brew whatever-whenever.

Protagonist, which debuted on October 22, is Barrier Brewing’s newest whatever-whenever, and “we have five or six more beers waiting,” said Klein. This includes a Brettanoymeces-fermented ale brewed with lemon peel and peppercorn.

“We also want to do a new bottle every month,” said Klein. “We want to fill the cooler in the tasting room, eventually.” 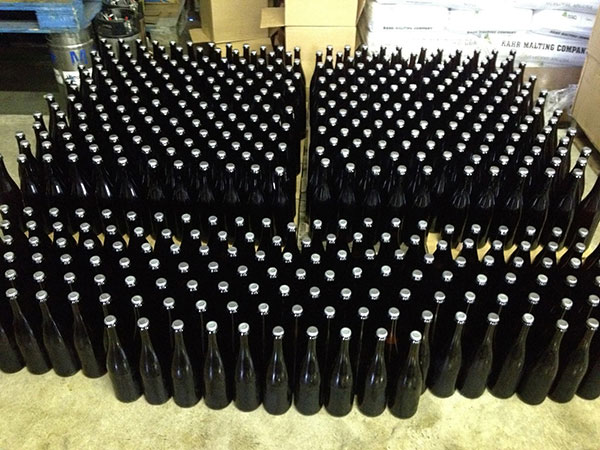 The brewery’s next “new bottle” is actually a reappearance. Submersion Double IPA, the first bottle-release from Barrier Brewing, was originally “brewed and sent to the tanks two days before Sandy reared her ugly head,” said Frymark. Its return, on October 30, is not a coincidence; it’s a commemoration.

“The rerelease is a way to reflect on a year passed, and how we’ve been able to rebound with everyone in our community,” said Frymark. “It’s also a reminder that our business doesn’t exist without our customers. The support from everyone has touched us so much.”

The creation of ROOM4TASTES demonstrates my inability to control and use ‘tasting room’ in a sentence, because the phrase is visually unpleasant. I am aware of ‘this’ irrationality (I am also unable to use ‘this,’ unless placed at the start of a sentence), but cannot offer a rational explanation. The use of ‘tasting room’ elicits insecurity. It elicits anxiety. It causes a crippling analyzation of self.

Acceptance, whether of word, weather, or anything, is liberation. Barrier Brewing was unable to control Hurricane Sandy, but accepted ‘this’ and progressed.

This passage may appear incoherent. I (dis)agree.