In the style of P.G. Wodehouse (who never made it out West—residing for decades in Remsenburg but never Napa Valley, but if he had, oh boy, would its manners have some comedy)

There was a distinct twinkle in Jeeves’ eye when he left, making off I’m sure for Pancha’s in Yountville or some such den of dishevelment on the outskirts of town. As for me, I was tucked crisply into a well-made Gibson (my drink of choice), standing at the patio bar at Auberge Du Soleil, my lodgings for this caper. Looking out into the vines I could hear rustling beneath me but could not see, having given Jeeves and his torch the remainder of the evening off I was left with only the moonlight for illumination. I’m quite certain he was ready to align with Beech, both of them upright men when in polite company but, when left to their own devices, as likely to swindle a pool shark out of his fins as not.

Just minutes earlier the last amber rays of sun had sunk behind Mount Saint Helena, which Robert Louis Stevenson had made his honeymoon site when this was a rougher, wilder place. One not prone to verandas and nightcaps and downy beds swathed in Egyptian cotton. Nonetheless, one of my favorite amenities here at the hotel was the Mercedes sports car lent to me (and any guest who asks). The option to joyride is one I’ll always take up. 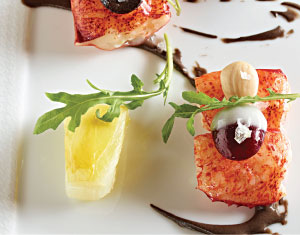 The day for me started with a light breakfast on this very same veranda (though I dare say the fare was a might more pleasing than the kippers and eggs of rustic breakfasts back at the country manor). This was more of the style to which I’d become accustomed in the city, with the pleasures of the country to boot.

The car whisked us to Bardessono in Yountville, where we had a vigorous rub- down at the spa. Then the lass who was our masseuse soothed us with smooth river stones that had been warmed and were, to the touch, just about what peace of mind and body might feel like. Afterwards I felt as refreshed as I do after imbibing one of Jeeves’ rejuvenating libations. Thus revived, we were in proper spirits for a quick jaunt above the valley in a hot air balloon. The bird’s-eye perspective lent a delicate beauty to the sun dappled hills below. After an inspiring tour, the thing touched down light as a feather and I was no worse for wear.

Then off to taste wine at a place in Rutherford that makes The Four Seasons look poverty-stricken. A dapper Frenchman named Jean Charles Boisset hosted us in his private sanctuary at Raymond Vineyards dubbed the Red Room. So named for its color scheme and accoutrements—somewhere between a bordello and Versailles. The place dripped with Baccarat.

There is a separate winery adjacent to the Raymond Winery just for dogs. The pooches drink filtered water from gleaming replica wine fermentation tanks and their cooing owners buy bottles of wine with the image of a handsome French bulldog named Frenchie (what else, eh?) splashed across the front.

Dinner was not as ornate an affair as the Baccarat-bedecked tasting room, but it was no less posh for it. My man at Auberge had scored us a reservation at Thomas Keller’s French Laundry for that evening. We heard about the restaurant in New York (it is the sister to Per Se) and looked forward to the affair with great excitement, but the actuality of a five-hour meal and an extended 18-course tasting (the standard is nine) certainly cut into the day’s activities. Each course was laid with such precision and described with such detail that I could fill pages telling you what they consisted of if only I could remember it all. But with each plate, we were told the chef stubbornly refused to repeat an ingredient, so not one sprig of thyme nor one dice of radish was out of place, the parts moving into a symphony of perfect harmony, the flavors melding to something new with each bite.

I know I need to save some room for tomorrow’s similarly drawn-out affair at Meadowood Restaurant, where chef Christopher Kostow has been gaining a reputation for his own tasting menu—one which looks to be delivered with a great amount more flair and modernity and less fastidious tradition. Speaking of tradition, I may need to begin my own tradition of letting out my britches, lest I not fit in the seat on the jet back to New York. 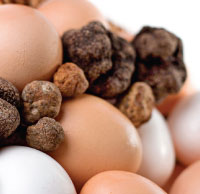 The Lore and Lure of Truffles
Now entering its fourth year, the Napa Truffle Festival is not just for devotees of the sought-after and valuable fungi. No, between lunches heavy with truffle-shaved everything and dinners where truffles are served roasted in bowls, attendees learn about getting closer to the elusive dream of the cultivated California truffle, which includes methods and techniques and even getting dog training demonstrations. There are no truffles yet grown in Northern California, but the attendees of the Truffle Festival are hopeful. Many guests are would-be truffle orchard owners (and many already vintners). While there are a few attempts still ongoing, nobody has yet sprouted a spore in California (though promisingly, one was grown in Oregon last year). The truffles cooked up by chefs like La Toque’s Ken Frank and consumed here are flown in from France and Italy. 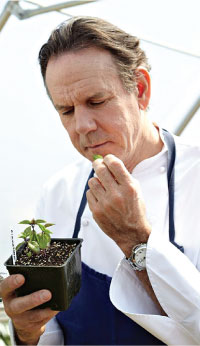