The birthplace, arguably, of the entire craft beer movement in American is Sonoma, California. Situated squarely in wine country, Sonoma’s Eighth Street East was once home to the New Albion Brewing Company. The brewery was founded by beer pioneer Jack McAuliffe in 1976, the bicentennial year when Americans celebrated their independence while McAuliffe and his ilk were declaring theirs from mass-produced suds. New Albion is now defunct save a once-a-year release done in partnership with Sam Adams. Its offspring in Sonoma and the surrounding environs carry on the pioneering spirit that made one man think he could brew beer in a warehouse.

Like McAuliffe, Tim Goeppinger, who founded Sonoma Springs Brewing Company in 2009, considers himself a homebrewer. Goeppinger stresses the importance of having a local beer; his fresh brews don’t usually make it much beyond the stools of the shop he and his family operate out of a nondescript building in a busy commercial district. The building is in—for all intents and purposes—a strip mall, meaning there is little of the romance of microbrewery apparent from the outside. On the inside, things are about as homespun as they get, with chairs and mismatched stools you might find in someone’s living room, though the strong sent of malt and brewing fills the room. Except for a few festivals most of the beer gets served right there, though some of the brewery’s popular Roggenbeir (rye beer) finds its way into local beer bars like Proof’d on the historic Sonoma Plaza and Olde Sonoma Public House.

In Sonoma you’ll also find the far more polished and commercial HopMonk Tavern, begun by Dean Biersch (half of the founding team of Gordon Biersch Brewery, which he has since sold). HopMonk is a classic brewpub with pretty good pub grub (its beer is brewed not on premises, but under contract elsewhere in the Bay Area). The large and sunny beer garden and live music nightly also make this a pretty “dank” spot, in the local vernacular, to while away an afternoon. 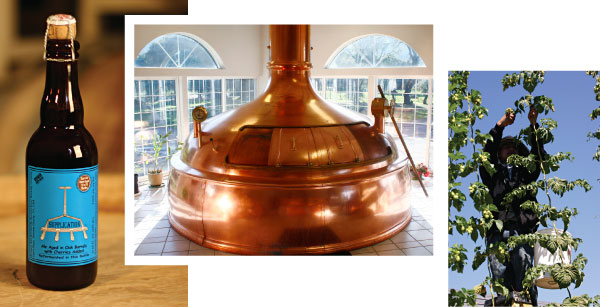 If you start to miss Long Island or feel a longing for a Guinness you will feel right at home at Murphy’s Irish Pub, which is an Irish Pub not unlike what you might expect to see in Merrick. They sell T-shirts that say, “Welcome to Wine Country, Now Have a Guinness.” A must-have for the ironic wine country venturer.

Speaking of strange bedfellows, the Russian River Brewing Company near the county seat in Santa Rosa was once a project of Korbel, makers of “California Champagne.” Korbel decided in 2003 that the beer business was not right for them. Brewmaster Vinnie Cilurzo and his wife Natalie took control of the microbrewery and local beer lovers have been the lucky beneficiaries ever since. The brewery, now operated out of a surprisingly cosmopolitan stretch in Santa Rosa, makes a sought-after straightforward high quality IPA called Pliny the Elder. This popular brew shows up at the occasional local tap for a brief period before word gets out. Their much more complicated sour beer, Supplication, is aged in pinot noir barrels and inoculated with the yeast strain brettanomyces, more often associated with the more rustic and odoriferous wines of Bordeaux. The resulting heady mix, served from bottles plugged with champagne corks and cages, is easily the ultimate cross-pollination of wine geekery and beer geekery.

It doesn’t get much more NorCal than saluting the Bear Flag, the symbol of the Bear Flag revolt. The story goes that a group of pioneers raised the grizzly emblazoned flag right on Sonoma Plaza after tying Vallejo, the Mexican general who ran the area, to a chair and declaring California its own independent republic. 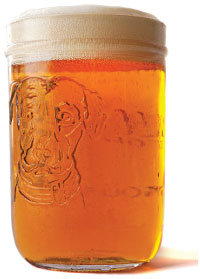 Bear Republic, a brewery based in Healdsburg, takes its name from this little bit of historical lore. Its beers are often as burly as the rough settlers who raised that first flag. And you can try them all at the Bear Flag brewpub, with special seasonal selections rotating in often.

Perhaps no local beer is more typical of the modern California style of beer than the hoppy ales of Lagunitas Brewing Company. One of the larger and more established breweries in the area, Lagunitas offers tours and tastings and hosts nightly live music in its beer garden and the adjacent taproom is always a good place to knock a few back.

Venturing farther north into Mendocino, driving through the town of Boonville in Anderson Valley you’ll find tall hops (which bear an uncanny aromatic resemblance to marijuana, Mendo’s other cash crop) growing across trellised wires at the Anderson Valley brewing Company—a spot as off-kilter as the community it calls home. In addition to trying the beers and taking a tour you’ll learn some of the local lingo.

Boontling was either invented during prohibition by bootleggers or earlier by farmers when they didn’t want their wives to know what they were saying. If you are game, play a round on their professional disc golf course. If you’ve thrown a Frisbee or played golf, you can guess how the game marries these two concepts. If you’ve never played, suffice it to say disc golf is as ridiculous as it sounds.

Even farther up the coast and near the crashing Pacific is North Coast Brewing, one of the area’s most nationally known and respected beers. If you haven’t heard of North Coast, you have probably heard of some of its beers, each of which bears its own distinct label, such as Scrimshaw, Old Rasputin, Pranqster and Brother Thelonious. The brewery offers tours and tastings and across the street North Coast has its own large restaurant and brewpub.

North Coast Brewing company distributes to the heart of long island check out their website to find out where @northcoastbrewing.com