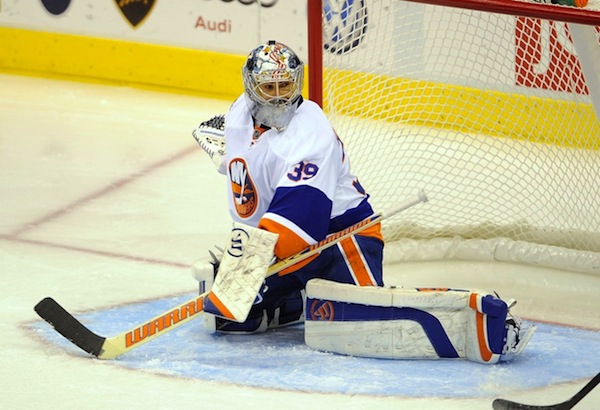 Most Islanders fans wouldn’t expect this, but Rick DiPietro is on his way back to the NHL. The Carolina Hurricanes recently took a chance on the former Islanders netminder and signed him to a professional tryout agreement last week.

He made his debut with the Charlotte Checkers, an American Hockey League affiliate of the Canes, stopping 25 shots, but losing 5-2. It marked DiPietro’s first action since playing for the Sound Tigers last season, going 9-9 with a 2.93 GAA and .893 save percentage.

“When he’s healthy and he’s into it, he can stop pucks,” Carolina General Manager Jim Rutherford told ESPN. “That’s what we’re hoping he can do. He’s got a lot of things behind him. It’s a very good opportunity for him.”

A former top overall draft pick in 2000 by the Islanders, DiPietro, 32, has had a roller coaster of a career, once tying the Islanders record for wins in a season to eventually being booed off the ice in the twilight of his time on Long Island.

The franchise opted to buy out the rest of his 15-year, $67.5 million contract this year.

Cam Ward, Carolina’s top goalie, is out for a month with a lower-body injury, and backup Anton Khudobin is suffering from a similar issue. Their minor league stoppers Justin Peters and Mike Murphy have been called up, which is why DiPietro was signed for the time being.

There was a time when DiPietro was the face of the franchise. The John Tavares before John Tavares, and also a very skilled goalie in his prime.

DP Highlights
*He represented the United States on Team USA at the 2006 Winter Olympics in Torino, Italy. DiPietro started four of six games.
*His one and only NHL All-Star Game appearance came in 2008.
*He holds the Islanders record for saves in a single-game with 56, which he set in a 2-1 shutout loss to the Rangers in 2007.