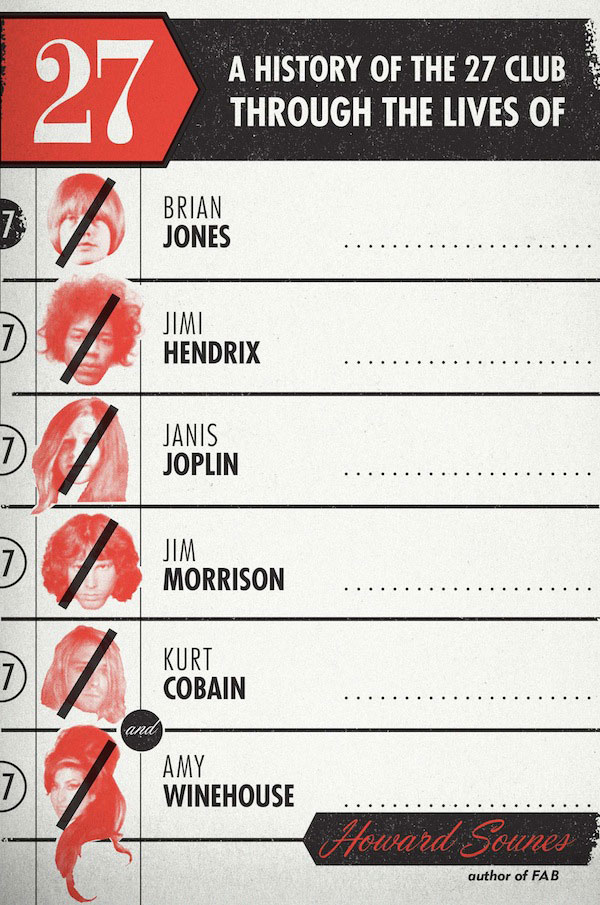 You remember the first time you heard it.

Was it the guitar that first touched your soul and called you to dance? Or maybe the bluesy tones made you sway, or the sitar, the drums, the listen-to-me voice.

You were so young, and so were the performers who brought you to that point. Was it coincidence that they all died so early, or was it something more sinister? Read “27: A History of the 27 Club Through the Lives of Brian Jones, Jimi Hendrix, Janis Joplin, Jim Morrison, Kurt Cobain, and Amy Winehouse” by Howard Sounes, and find out…

Call it tragic, call it a shock, but it was probably no surprise to most: Hendrix, Joplin, and Morrison. Brian Jones. Cobain and Winehouse—each, arguably, a genius in the musical industry and each dead at age 27. What is it about rock & roll and that age? Is there something mysterious afoot?

No, says Sounes. The 27 Club is a coincidence—a major one, true, and terribly sad, but a coincidence nonetheless. Statistics show that dying at age 27 is not uncommon, especially when it comes to hard-living, drug-taking rock stars.

All, says Sounes, seemed to be “weary of life by the end.” As children, they were intelligent, and five of them naturally gravitated toward music. All had rocky (or nonexistent) relationships with their parents. All six suffered from mental illness or depression and were substance abusers.

Jones had been “living dangerously for years” before drowning in his swimming pool. Hendrix died under mysterious circumstances and ever-conflicting stories. Joplin signed a new will three days before her death, perhaps contemplating suicide. Morrison, fearing a jail sentence in Miami, flew to Paris, where he eventually overdosed on heroin. Before he committed suicide, Cobain expressed hope that his toddler-daughter wouldn’t follow in his footsteps. And Winehouse literally “drank herself to death.”

And though Sounes indicates that most of these six musicians “had a horror” of being alone, alone is how they died.

The first time you heard “Light My Fire” or “Me & Bobby McGee,” it was probably from a scratchy record and cheap speakers. “27” brings those memories back—with a lot less static.

This is, in fact, almost a read-in-one-sitting kind of book, so thoroughly fascinating is author Howard Sounes in his method of storytelling. We start with the death of the most recent inductee into the “club,” then travel around and back. Along the way, Sounes explains what led each to the (often bitter) end, then he gives readers a shock: the 27 Club is a mega-coincidence, but the six here are the tip of the tragic iceberg…

I very much enjoyed this book, not just for its musical history but for the sounds it put inside my head. I think that if you’re a fan of classic rock or blues, or if you just want a good look at stardom gone wrong, “27” gets five stars.