Pristine weather, world-class dining and throbbing nightlife have long transformed Miami into a jetsetter’s destination, attracting wealth and fame from the four corners of the globe. Just listening to the layers of conversation as they play out like an Altman film, you can hear Russian, German, Japanese, Portuguese, Hebrew, Arabic, Spanish, English with a Jamaican accent and Jamaican with an English accent. And that’s before getting to the rental car.

There’s more than one Miami, and each has its allure. The key to exploring and enjoying her many faces is a centralized location.

Love You, Betsy
The Betsy Hotel is situated at the north end of Ocean Drive in South Beach. It lives up to its reputation as an elite boutique hotel, which invites that dream state of barefoot, casual chic. The Betsy’s décor foregoes Miami’s art deco past for Georgian-style washed woods and earth tones, Panama-style ceiling fans spinning casually and the warm lilt of soft rock wafting through the lobby where the walls are adorned with fantastic photographs of the early Beatles and Stones. Outside, the pool ripples quietly and is well-appointed with comfy lounge chairs and plush towels. The Betsy’s fine restaurant BLT Steak offers cozy outdoor seating and roomy chairs on the veranda facing Ocean Drive; a fine place to sip a cocktail, smoke a cigar and watch the throngs go by.

Directly across the street is picturesque South Beach itself, where the water’s incandescent blue is matched only by the sky, the sand is soft and fine like baby powder under your feet and tasty breezes whisper through the palms. Upon arrival, the good folks at The Betsy set us up with lounge chairs and umbrellas on the shoreline and we escaped into that tropical eternity where you can walk 100 yards into the ocean and still see the bottom.

Mellow Miami
Bypassing the bump and grind of Ocean Drive and getting south of Fifth Street, the scene mellows into the South Beach that a more discerning visitor will want to absorb, one luxurious minute at a time. The clock stood still at De Rodriguez Cuba, a shining diamond tucked away in the Hilton Bentley Hotel. As a dining destination, De Rodriguez Cuba is the idealized Miami: Relaxed, sexy, indulgent and tastefully decadent. The softly lit space is set in dark browns and rich reds, complemented by teasing accents of fluorescent purple, all set against the electric blue of the outdoor swimming pool, creating a stylish and sultry ambience that’s accentuated by the house DJ spinning soft trip hop and trance beats in the corner.

The tasting menu gives James Beard Award-winning chef Douglas Rodriguez a chance to shake a tail feather, and he does so with grace and flavor. His ceviche sampler allowed each variation to shine alone and then blend together like a finely tuned jazz quartet and his pulled skirt steak alternates between smoky, sweet and savory as it complements traditional rice and beans. Dinner was paired with an Argentinian pinot noir that was silky smooth, setting an early tone of chillitude as we melted into the plush banquettes and let the night drift away in a tropical dream. 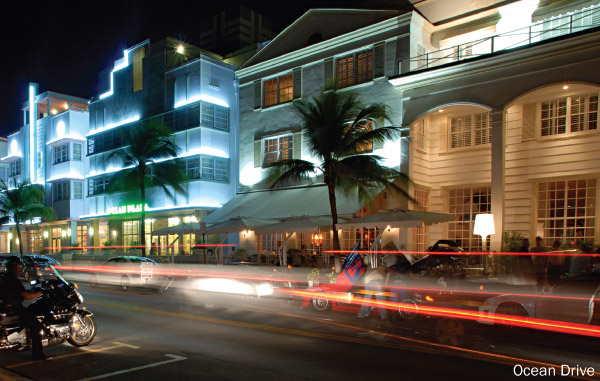 A Cruise Through Paradise
In the fall and winter months, the South Florida sun retains her bone-penetrating warmth, but sheds its evil twin—the summer humidity. We rolled the windows down, killed the AC and spent the morning casually driving through the residential neighborhoods of Coconut Grove, about 20 minutes south of downtown Miami. The goal was to get lost in the Spanish architecture, the vast variety of plants and flowers dotting the landscapes and marvel at the canopies of banyan trees, with their Avatar-ish, otherworldly configuration. Eventually we wandered into Catch a Wave Surf Shop, where Paul Dunbar, proprietor and promoter of all things South Florida, joyously sent us on a quick voyage down the terra cotta mansion majesty of Old Cutler Road to the Fairchild Tropical Botanical Gardens. This nature conservatory indulged us in the Florida of children’s books and Gauguin’s visions. The kids were enraptured by the rich primary colors, freakishly large tropical plants, exotic butterflies, brightly speckled salamanders, prowling iguanas, bright birds in full song and flight—a breathing, teeming paradise.

An Art Excursion
This perfect weather can make it tough to venture inside, but heading back to South Beach we came face to face with one of Miami’s stranger personalities at the Bass Museum of Art. The Bass is sparse and Kubrickian: Warmly narcotic, yet wholly chilling in stark white. Ascending the central ramp, a handful of Renaissance religious paintings quickly gives way to the multi-media strangeness of experimental filmmaker/artist Eve Sussman, whose 89 Seconds at Alcazar interprets Diego Velasquez’s painting Les Meninas (The Maids of Honour) as it reflects, refracts and deconstructs humanity’s worst primal urges: Bloodlust, avarice, destruction and physical disrespect. Disorienting, horrifying and completely compelling, we went from the sun shining to just The Shining in a few short blocks.

We also took a detour through the Wynwood Art District to see the Wynwood Walls. The minds behind Miami’s renowned annual Art Basel event have transformed what would otherwise be a deteriorating, heat-baked ghost land into a stunning display of psychedelic graffiti and inspiring outdoor artwork with a rich palette of primary colors and compelling murals. The expansive works cover many square blocks, carrying strong messages of political conscience, social angst and creative brilliance. This is Miami reaching tall from the depth of the streets; we admired the effort, the execution and the overall effect. 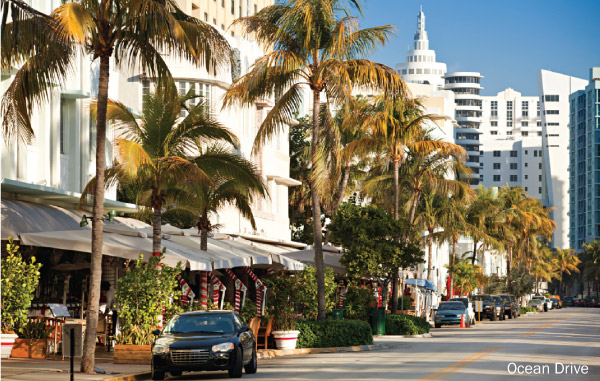 El Sabor Local
After a beach siesta, my wife and I went back to SoFi (South of Fifth) and found the Miami we’d fall deeply in love with at the Local House. As we lounged on cushy benches and sipped Napa Valley chardonnay, chef Jose Pinot generously entertained us with passionate and gracious stories about his Puerto Rican roots and their influence on his fine cooking. His knack for building depth with texture and light flavors was in full effect in both his coconut milk ceviche and his crispy octopus with lentil heirloom tomato salad. Both dishes danced with touches of citrus, deft use of spice and pristine seafood that absolutely popped. These finely presented light plates, along with a white wine and saffron seafood stew, was definitive and excellent. The shabby chic décor, the rooftop pool with couches, torches and ocean view, the pops of turquoise, blue and sand, all evoke the Hamptons high life; Long Islanders will feel like they’re both far away and right at home.

Later, I followed through on that cigar craving. Deco Drive Cigars is right next door to The Betsy, so I grabbed “ol’ reliable,” a dark Ashton VSG, lit up and melted into a lounge chair. As acoustic Zeppelin (“That’s the Way”), Dylan (“Lay Lady Lay”) the Stones (“Factory Girl”) and CSNY (“Helpless”) drifted through the hotel, I drifted away myself. I had found the Miami I adored. Would I ever be able to leave? And if I did, how soon could I get back? It mattered not. Warmed to the core, I sprawled out, surrendered to the moment and blew rings at the moon.

The morning brought news of the passing of Cuban-American Pulitzer Prize winning author Oscar Hijuelos (The Mambo Kings Play Songs of Love), so we were rightfully compelled to visit Little Havana. An orchestrated foodie run from Grace Della’s Miami Culinary Tours came highly recommended from the staff at Local House, but with the waves, palms and bright sun calling, we found ourselves at Versailles for breakfast instead. This Cuban-American institution has held forth here since 1971. Crowds of well-dressed muchachos milled around the front counter/bakery chatting it up, munching pastries and sipping coffee, but we sat in the old-school dining room. Nothing fancy, just a legendary sandwich Cubano (toasted Cuban bread with thinly sliced roasted pork, ham, Swiss, pickles and mustard) and a piping hot cup of café Cubano; absolutely affable, affordable and authentic.

Crazy From the Heat
Strolling down Ocean Drive on a Saturday night, you’ll see Miami in her schizophrenic glory. Hot bodies of every type—European models in impossible bikinis, thuggish speed bikers and Dirty South gangstas, ragged Rastafarians and international men of mystery, with their Rolexes and Rolls-Royces, reeking of opulence and debauchery, all pulsing and parading in a simmering fever. At one point, three convertible Bentleys rolled slowly up the drive, a crew of hardcore gang bangers hanging out the sides, blasting Lil Wayne, smoking Cohibas and making it rain—quite literally throwing money away as locals and vagrants scurried into the street like medieval beggars to pick up dollar bills. The heat will make you do crazy shit.

But that’s part of the allure of South Beach, anything goes.

Right around the corner from this excess we found graceful Espanola Way, blocked off to cars allowing throngs of visitors to walk in the warm Florida night under canopies of string lights as happy couples and families pack the sidewalk cafés and restaurants. After a few cold Presidentes and expertly prepared rare tuna tostadas at Oh Mexico! (ignore the pedestrian name, focus instead on the freshly made guacamole), we strolled a few blocks further to Lincoln Road, a vast outdoor mall, once again teeming with beautiful people, shops and restaurants. I snuck upstairs at the Van Dyke Café to grab a nightcap and catch the University of Miami Jazz Septet as they ripped their way through a sound check with cymbals sizzling, snare cracking, stand-up bass driving underneath and ivories dancing in odd figures over the top while the horns slashed and burned in fits. I wasn’t sure, but it sounded like Monk, and I got lost in the dissonance; Miami once again revealing her artistry and sophistication.