Steak satisfies the primal urges of carnivores for two reasons, simplicity and comfort. Aside from a well-roasted chicken, most meats require a certain level of manipulation—a marinade in this, a sprig of that or a complicated cooking process—to the point the protein is little more than a vehicle for other flavors. Not steak. Steak is blunt and shameless on the plate with maybe a garnish of greenery to contrast the mahogany browned valleys under the ridges of blackened, crusty flavor.

“Everyone understands a steak house,” Insignia Prime Steak & Sushi’s executive chef Mikhail Apelsinov said. “They recognize that the portions are larger and the meal is approachable, simple and comforting.” As the leader of the Smithtown-based kitchen that can send out 450 dishes on a busy night, Apelsinov would know.

When the humble steak becomes a borderline revelatory experience it does so because the few components are impeccable. Take a well-marbled piece of beef, age it to render its moisture and concentrate its flavor, add a bit of kosher salt, some intense heat and finish it with a touch of butter before it rests. It sounds deceptively easy enough to replicate at home. “Our meat is dry aged close to 45 days when the industry standard is 21 or 28 days,” Apelsinov said. During that time the Midwestern, grain-fed beef transforms; enzymes go to work in a temperature and humidity-controlled environment breaking down connective tissue while developing an armor of mold. “You get that musty smelling mold and it doesn’t sound great—it kind of smells like wet wood,” he said. “But once it gets cleaned up and cooked that flavor develops.”

After finishing culinary school in NYC, Russian-born Apelsinov came up through the local restaurant scene working in continental cuisine and the steak house-like 21 Club. Lured to the Island by a position at the eclectic (now-defunct) Crazy Dog in Sayville, he first focused on steak as the executive chef at what became Rare650 before running the kitchen at Insignia (both Scotto establishments). That’s when he started developing his touch.

Most cuts are cooked the same way: A brief run under the 1,800-degree broiler, resting and then another round under the heat before it heads to the table. The difference between a rare and medium rare is a minute or two and it all comes down to the feel. “We touch every piece of meat to test for doneness,” Apelsinov said. “It took me a couple of years to master that. We really only use the thermometer when we’re roasting a big prime rib.”

The menu is moored in traditional steak house fare, but Apelsinov finds creativity in the seafood and constantly evolving specials, some of which eventually earn a spot on the menu, like the grilled marinated artichoke and mac and cheese with lobster. His time to work on them is early in the day in between ordering supplies, scheduling and putting away stock—before the crush of the evening’s orders remind him that he’s the captain of a 25-person team. When he’s not at work he’s often ordering out with his young family. “I keep neighboring restaurants in business by ordering out a lot. Little Vincent’s in Huntington makes a good pie,” he said. Pizza is, of course, a beloved comfort food of another ilk. 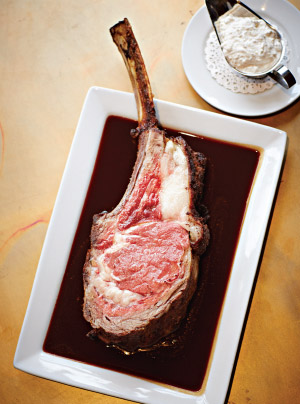