The Act of Killing
After the Indonesian military coup of 1965, more than half a million so-called “subversives” were brutally murdered by government-supported gangsters and paramilitaries. None of these killers have been brought to justice. In this mind-blowing documentary, filmmaker Joshua Oppenheimer challenges some of the actual gangsters, who are now mostly over 60 years-old, to reenact the killings they committed. However, Oppenheimer adds a surreal element by allowing the killers to film the reenactments in the style of their favorite movies, which unsurprisingly are Hollywood action movies, thrillers and musicals. The result is a stunning exploration of mass murder and whether or not it is possible for someone who has committed the atrocities to develop a conscience. 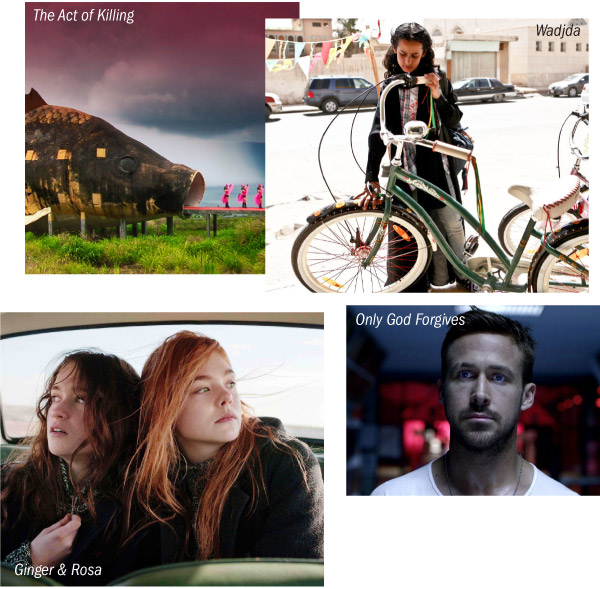 Only God Forgives
Filmmaker Nicolas Winding Refn and star Ryan Gosling follow up on their popular 2011 neo-noir Drive with this searing plunge into the depths of violence and vengeance. Gosling stars as an expatriate running a kickboxing club in Thailand who gets caught in a maelstrom of killing when his brother commits a senseless murder. Refn’s stunning hypnotic imagery seduces viewers into a beautiful but shocking nightmare. Gosling is very good as the sort-of-hero but a blond-wigged Kristin Scott Thomas steals the movie as the worst mother in cinema history.

Wadjda
Much of the publicity for Haifaa al Mansour’s Wadjda focused on her being the first woman filmmaker in Saudi Arabia, but the real reason to see this movie is because it is simply wonderful. Al Mansour’s lovely tale of a rebellious Saudi girl who will do anything to fulfill her dream of having a bicycle (which is forbidden to Saudi girls and women) takes viewers behind the opaque veil of the kingdom’s closed society to reveal the complex lives hidden within, especially the women who fight for their freedom despite the rigid restrictions placed on their behavior.

The Wind Rises
For the past 34 years, legendary Japanese animator Hayao Miyazaki has been thrilling audiences with dazzling movies like Spirited Away and My Neighbor Totoro. Miyazaki said that his latest movie, The Wind Rises, will be his last. If that proves true, it will be a fitting capstone to his brilliant career. Miyazaki mostly abandons his trademark fantastical imagery to create a mesmerizing portrait of pioneering aircraft designer Jiro Horikoshi, whose most famous creation was the deadly Mitsubishi Zero fighter plane of World War II. All of Miyazaki’s lifelong ambivalence about technology and progress is encapsulated in this tale of a visionary artist who knows that his work will lead to devastation.