Say goodbye to the rapscallion rebel in me
I took him to the river and swam
On the opposite shore, I fell to the floor
I knew I wasn’t on fire no more
From “Rapscallion” by Johnnie Lee Jordan

Patchogue native Johnnie Lee Jordan got his first guitar at age 12, immediately formed a punk band and started playing gigs at local venues like Ground Zero and Lulu’s Village Pub. Hearing his father’s and brother’s music—Waylon Jennings and Willie Nelson—inspired Jordan to write his own songs; The Smashing Pumpkins and The Ramones influenced his band’s aesthetic. “I always thought of myself as a musician even before I could play,” said Jordan, who found it harder to learn covers than write originals.

The prolific songwriter’s sound has since evolved into indie folk rock and he’s spent the last decade playing in New York and nationally with different acts, often solo or with his “boys”—longtime friends, and members of Heavy Duty Super Ego, bassist Josh Morin and guitarist James Usher (his new drummer is Nick Garbarini).

Jordan has had to take on other jobs to make ends meet, though it’s been difficult to keep steady employment with his touring schedule. But finding the time to go on auditions has paid off. Jordan was recently featured in Gap’s biggest ad campaign to date, Back to Blue focusing on celebrity musicians, not long after appearing on Late Night with Jimmy Fallon’s Instant Songwriter Series, during which he had to make up a song about a hot dog—on the spot.

“That was fun and Fallon was great,” said Jordan. “But I told him, ‘Next time I think I’ll come on as a guest.’” 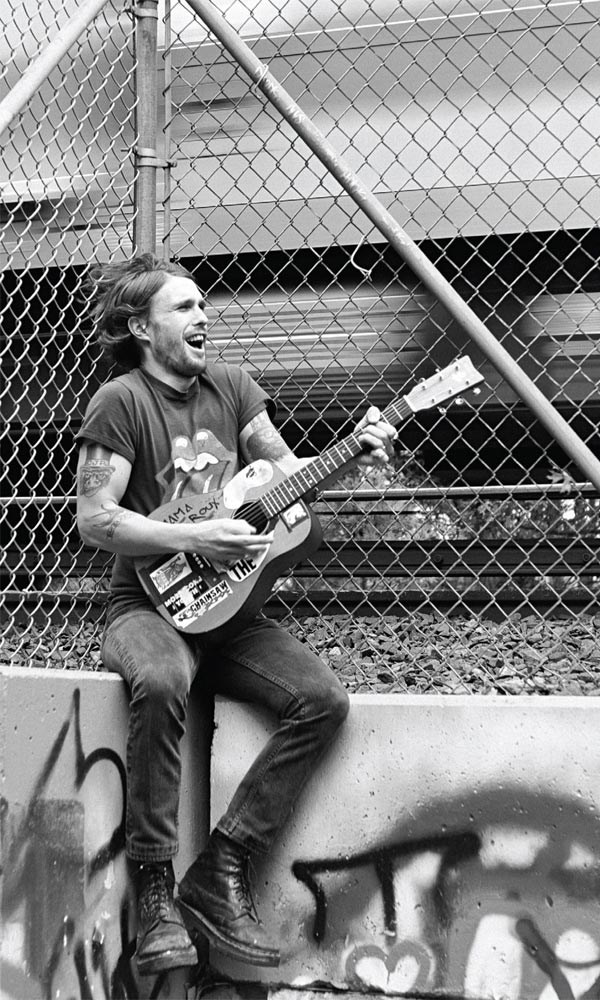 It’s only a matter of time before the 26-year-old breaks out of the New York City underground—expect a 3-song EP by the end of the year and his debut full-length, Run, in January. Produced by Long-Island’s own Mike Sapone (longtime producer of Taking Back Sunday and Brand New) the album consists of 13 semi-autobiographical tracks that depict some dark times for the Brooklyn-based musician. “I think it just all comes under the territory of early 20s musician traveling from city to city not always knowing where he’s at,” said Jordan. “So it’s a sex, drugs and rock ‘n’ roll record. But it’s not a glorification.”

The album has a film noir feel centered on recurrent themes of traveling, crime, drug use and being on the run, but it’s peppered with humor throughout. “There’s definitely some tongue in cheek, a little bit of brattiness and self-awareness in there,” noted Jordan, who writes in a stream of consciousness style and doesn’t always understand a song’s meaning right away. “No matter what you’re going through, you have to think, ‘It’s all ridiculous, there’s something funny in everything.’”

A couple of standouts of Jordan’s work capture the two ends of his songwriting extremes. “The Loot” could be apropos for the soundtrack to HBO’s neo-noir series Bored To Death and “Cherry Grove” is a simpler song about summers he spent as a teenager working on Fire Island. “It’s nice to be able to look back on a period of my life and not have to cringe about what I did or what I said,” he remarked. But the latter song also includes some telling lines about the record industry that sharpen its edges: “Everything I’ve dreamed is coming true/They keep it dangling from a chain in front of you/And say reach.”

Jordan has lived in New York for most of his life but you wouldn’t know it from his distinct voice, which can conjure Tom Waits or Jeff Tweedy. Sonically, the record has hints of psychedelia (“Run”) and alt-country on the likely first single, “Candy Mountain,” but Jordan describes the overall sound as “The Pixies and Television playing Tom Petty songs,” and The Replacements are the final piece to the puzzle. “Hootenanny was such a big record for me,” recalled Jordan. “I used to run on a treadmill and pretend I was Paul Westerberg singing ‘Can’t Hardly Wait.’”

He expects to have a release party for Run when it’s out. In the meantime, Jordan will do what he does best, take his songs on the road: “Tours are when I’m on my best behavior because I like to wake up early and run. I don’t drink anymore, I don’t do drugs so I love waking up in a new place.”