The electric guitar has been the central and essential instrument of rock ‘n’ roll. Whether it’s the earliest sounds of Chuck Berry, ’60s guitar gods such as Hendrix and Clapton or today’s heroes such as Jack White, John Mayer, Derek Trucks or Gary Clark, Jr., the rhythm and lead chords of an electric guitar define the music. 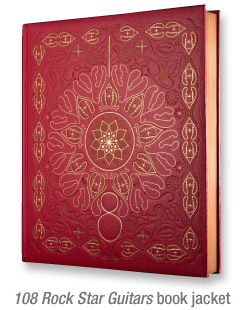 Guitar geeks don’t just play the instrument or admire others who do. They idolize various brands (Fender, Gibson, Gretsch, Rickenbacker, etc.) and can describe in detail the customizing that makes an instrument special. Pictures of guitar players grimacing while playing historic power chords have filled more books and rock magazines than anyone can count. But a new book features photographs of working guitarists’ instruments in an intimate, singular way. The photos in 108 Rock Star Guitars (Glitterati) by Lisa S. Johnson reflect the power, screaming leads and historic breaks of a huge slice of rock history—often backstage.

The standard edition is an oversized book bound in red leather with gold-edged paper. The photos say as much about each instrument as they do about the person who plays it. Johnson has spent her entire career in music and photography and is able to provide not only a wealth of photos and but an infinite amount of insight and stories about the people behind the guitars.

Long Island Pulse: It seems appropriate to open the book with Jeff Beck’s guitar, many would say he is the best guitarist on the planet. What did you learn about him from photographing his guitar?
Lisa S. Johnson: Well Jeff is certainly one of the best. There are so many incredible players out there and he has influenced and inspired so many, that in and of itself makes him stand out. In photographing his guitar I learned that while he can rage on the machine he is actually quite a gentle soul. It’s clear he likes the fit of a certain guitar body and neck and this takes precedent over fancy gear. The minimal wear and tear on his well-used guitar indicates gentle handling, yet you can still see some well-worn parts on it.

LIP: The Keith Richards and Ronnie Wood guitars featured are so valuable that they are only played during warm-ups. I’m surprised that Keef and Woody even use them at all. How did you get them to allow you to shoot those guitars?
LSJ: They use them to warm up with backstage before performances. When I met with Mike Cormier, Charlie Watts’ drum tech, whom I was assigned to work with… Mike said that I would photograph Keith’s Gibson ES-350 and Ronnie’s Gibson L-5, without hesitation. These were the guitars that both Keith and Ronnie had asked to be photographed as they are rare vintage instruments. 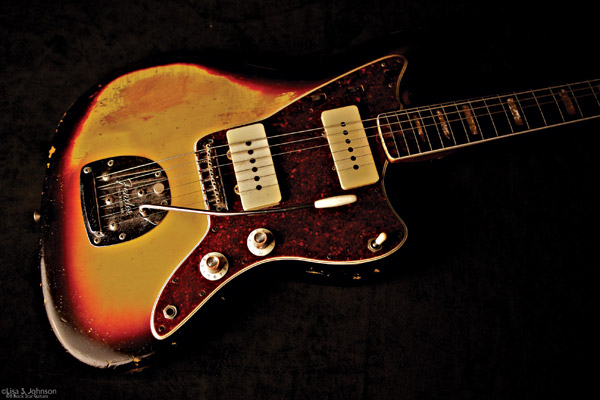 
LIP: It was great that you included The Ventures. The surf sound was so important to the evolution of the electric guitar. Did you try to get Dick Dale?
LSJ: Yes I’m so pleased to have worked with Don Wilson and Nokie Edwards and to also have a bass in there that Bob Bogle played. I’ve become close to Don’s daughters and son. They are just incredibly real people, born from one incredible visionary of the most unique sound of surf rock. I did try to get Dick Dale but thus far have not been able to confirm a photo session.

LIP: Mick Ronson was the only guitarist who passed away quite some time ago, but a guitar of his was included.
LSJ: Yeah I feel so honored to have been able to track down the cosmic Mick Ronson’s 1968 Gibson Les Paul Custom guitar.

I’ve always been a lover of David Bowie and the members of Ziggy Stardust. Trevor Bolder’s bass is also in the book (he passed just prior to the book’s publication). And now we just lost Lou Reed whose blue Bolin guitar is in the book. 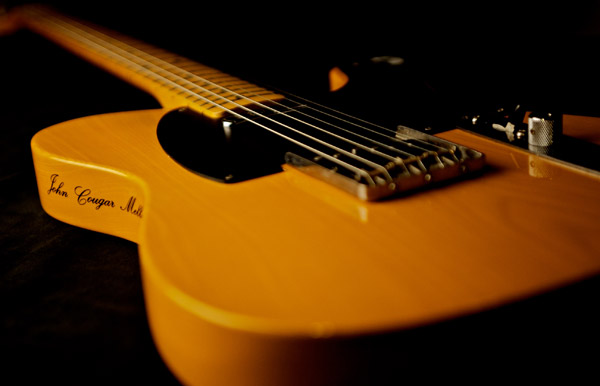 
LIP: What shoots turned out to be your favorite?
LSJ: Probably photographing Roger Waters’ bass directly underneath the historic The Wall in Athens, Greece, with a single light bulb, is one of my favorite shoots. The moodiness of it all, coming in to do the shoot right after witnessing sound check, then doing the shoot and then seeing the full concert right after was pretty epic. I love those shots of his bass. Also, having Robby Krieger come over and serenade me with his guitars as I photographed each of them will always be a cherished memory.

LIP: Which shoot almost didn’t happen?
LSJ: John Mellencamp. I was scheduled to shoot John Mellencamp’s guitar at 5pm at Nokia Theatre in LA. But then I got a “yes” to photograph Jeff Beck’s guitar at the Fox Theater in Pomona, CA, on the same day, which is about a 90 minute drive to LA. I had to get Jeff Beck’s guitar! So I took the risk of going out to Pomona to get the shot. Unfortunately there was a three-hour delay when I got to Pomona before I could photograph Jeff’s guitar. Luckily the Mellencamp crew was just awesome to work with and they let me slip in 3 hours late to photograph John’s guitar minutes before he was to go on stage. 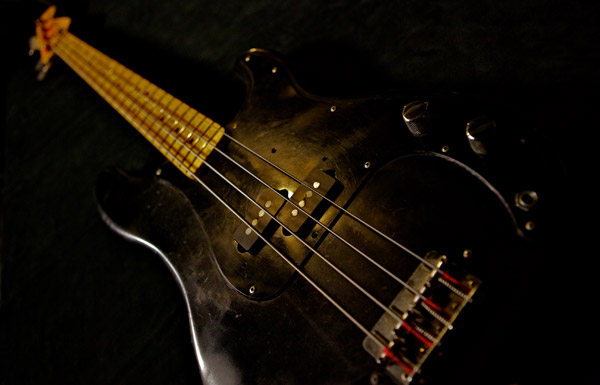 
LIP: Were there any musicians who selected a guitar you would not have chosen or did you make all the choices?
LSJ: For the most part I’ve always just been shown the rack and I was able to pick out the guitar or guitars I wanted to photograph. I always confer with the guitar tech for his opinion and of course would always ask for the artist’s #1. If a guitar was chosen for me, I would always be delighted with the choice and honored that I got to photograph the guitar they most wanted represented in the book.

LIP: Have you become friends with any of your fellow rock photographers?
LSJ: I have. Bob Gruen, Mick Rock, Timothy Greenfield-Sanders, Michael Halsband, Neil Zlozower, Timothy White, Robert Knight and the late Jim Marshall are all amazing photographers whom I’ve met and whom have influenced me over the years. Some I’ve become closer to than others. I certainly don’t include myself in their club… They actually lived and breathed those moments they captured. They were in it and are part of the history. I’m kinda like a toddler who came in after the scene who grew up listening to the music they photographed and now I sort of scratch my head saying “hey guys, ya never thought to photograph the guitars?!” But then again, the guitars were stories in the making then and the world was mesmerized by those creating such new sounds, not necessarily the equipment with which they were making the sound. 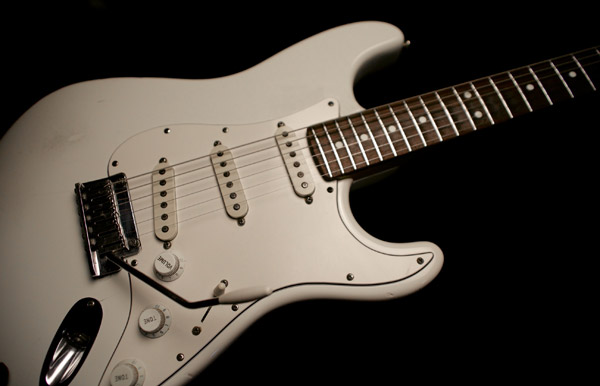 
LIP: Have you spent much time hanging out and getting to know any of the musicians whose guitars are in the book, or gone out on any tours?
LSJ: I’ve yet to go on tour with a band although that is something I would like to do. I’ve been privileged to have a nice amount of time and conversation with several of the artists in the book. Robby Krieger, Jeff “Skunk” Baxter, Porl Thompson, Michael Schenker, K. K. Downing, Steve Lukather, Hutch Hutchinson, Richard Thompson, Brian “Robbo” Robertson, Sugizo… lot’s of these guys in the book were über-cool about meeting and making it a personal point to show up with their cherished guitars.

LIP: Have you done any album covers and is this something you are interested in pursuing?
LSJ: Johnny Winter ended up using the shot of his 1963 Gibson Firebird V for his Live Bootleg Series Vol. 1 cd and Nils Lofgren is putting together the art for his next cd and they are planning to use several of the guitars photographed for the book.

LIP: Rock photography is now really recognized as a fine art with places like the Morrison Hotel Gallery providing a home for history to be given its proper due.
LSJ: Yes, I’m very happy about the world embracing photography as an art form, especially given my 10-year working history with the Eastman Kodak Company. Even aspects of photography are a dying art and thus more collectible. Many films and printing processes are no longer available. It was so cool to have my first exhibit at Mr. Musichead Gallery in Los Angeles. The owner there, Sam Milgrom has dedicated his life to rock ‘n’ roll imagery and content and has known from the early stages of photography the importance of collecting these works. 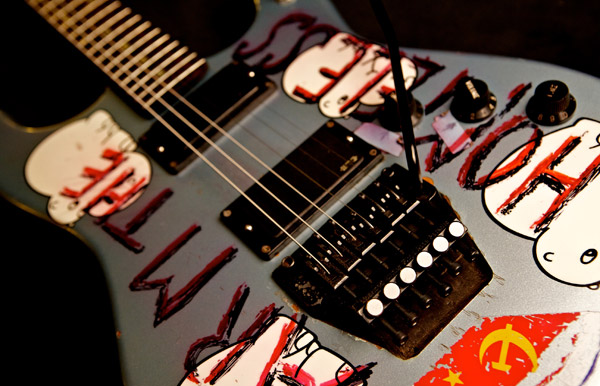 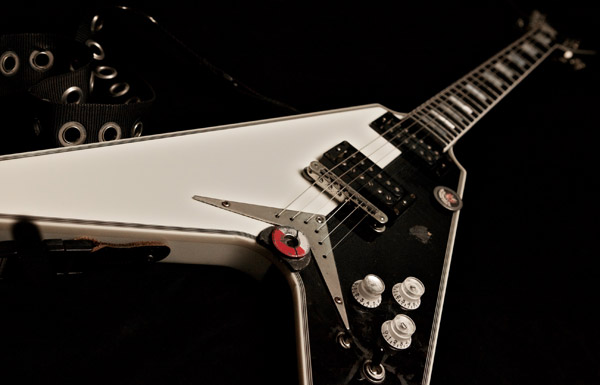