Art is friction, the harsh grind of creativity against convention. Amid turbulent times that call for such resistance, this winter Heckscher Museum of Art in Huntington takes a comprehensive look at our American artistic effrontery with Rabble-Rousers: Art, Dissent and Social Commentary. The exhibit is a thoughtful and eclectic contemplation of art as rebellion, whether it is against previously accepted artistic forms or social norms. Across the exhibit, the dissent slowly gathers steam and much like our social and artistic fabric, the vine gets more twisted as time goes on.

“This exhibition features artists who present visual protests to the status quo in countless ways,” said Heckscher Museum curator Lisa Chalif, “whether through a direct attack on contemporary politics, social norms and unjust power structures or by rebelling against the visual vocabulary of traditional and avant-garde aesthetics.”

In Rabble-Rousers the seeds are sown by American painter John Sloan, a socialist whose grim, detailed depictions of New York’s side streets, tenements and movie houses speak to his simpatico with the everyman. It’s easy to imagine Sloan carousing in the Village, soaking up the garrulous tavern life in timeless haunts like McSorley’s and Kettle of Fish. With etchings like Hell Hole (1917), Wigwam (1928) and 14th Street at 6th Avenue (c. 1935) he drags the spectator into the back-alley boozing of New York’s intellectual, creative and political zeitgeist, depicting a dark, pre-Beat, whiskey soaked who’s who of fat cats, trendsetters and ne’er-do-wells. With Girl and Beggar (1910), he uses a simple two shot of a desperate street cripple and an indifferent prostitute to encompass the macro-tale of cruel class difference in America.

Sloan’s street life is mirrored by James McNeill Whistler’s sublime melancholia. Featured are several pieces from Whistler’s Thames series, which depict Dickensian-era life on the river docks of London. Both The Pool (c. 1859) and Black Lion Wharf (c. 1859) convey a grey, gritty misery of life on the wharf and exemplify Whistler’s gift for making magic out of the seemingly mundane. 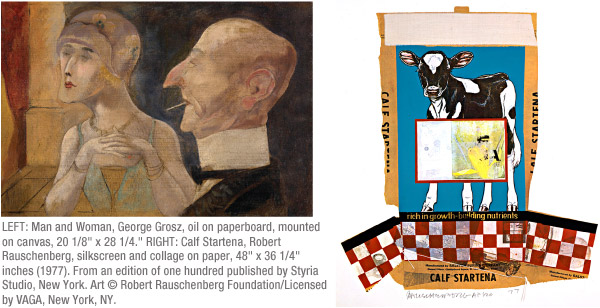 “Following the successful release of his etchings known as the French Set, [James McNeill] Whistler returned to London and began work on a series of prints, known as the Thames Set, that focus on the commercial life of the river,” said Chalif. “These etchings, documenting a way of life that was vanishing in the face of London’s modernization, are noted for the gritty realism with which they capture London’s underbelly.”

Whistler is preoccupied with form and composition here, using a “wide shot” perspective to detail the dark and dilapidated boats and buildings. Whistler’s eye for stark detail depicts this decaying world, but brings a beauty to it as well, a sort of perverse nostalgia that implies a fonder past and a troubling present, a competent example of artistic intent as social commentary.

No discussion of artistic social commentary would be complete without Red Grooms. As a cartoonist and satirist, Grooms’ busy creations speak to our inner jester, the innate buzz we experience when packed into tight environs. Groom’s Ten Independent Artists (1972) was conceived as an ad poster for a show at the Guggenheim in 1972 and it bursts at the seams with a vibrancy, detail and humor that exemplifies Grooms’ whimsical oeuvre. There’s nothing insidious, pretentious or subversive here—just Grooms’ affection for the lighter side of life, the hustle and sway of city life, art as joy.

As the exhibit moves along, so too does the manifestation of angst. The works move away from the realism of Sloan and Whistler and into impressionism. Arthur B. Carles evokes Cézanne, Matisse and Picasso, representing the daring break from convention that defines turn of the century painting. In Nude with Red Hair (undated) Carles’ voluptuous model becomes fuzzy and color surges to the fore as an end unto itself, speaking more to the soul and less to the mind.

The exhibition takes a turn with the mod-hippie undertones of Garry Winogrand’s Women dancing freely at museum opening (1970) and then by Leon Levinstein’s Mardi Gras, New Orleans (1975). In context, Levinstein’s provocative piece is a shock to the system, turning the nebulous idea of rebellion into an explicit object, making the leap from social consciousness to sexual revolution in the single snap of a shutter. Channeling Warhol, Brakhage and Mapplethorpe, Levinstein’s print simply stands naked and dares.

The culmination of process, philosophy and execution of Rabble-Rousers lies in Robert Rauschenberg’s Support (1973). Rauschenberg’s iconic use of everyday objects and his kitchen sink aesthetic peak in this piece, exemplifying his unique ability to render order from chaos by combining seemingly disparate images, textures, colors and materials to create cogent collages. Rauschenberg’s Support is non-linear, multi-textured, faux propaganda that reaches back for symbols of Judaic antiquity and employs deft subliminal marketing (an important precursor to Warhol’s pop art movement), where the modern consumer mentality is simultaneously applauded and derided.

That’s where the true rebellion lies. Within the confines of our larger socio-cultural expectations, whether real or imagined, American artistic culture enjoys the freedom to clap and sneer, to loathe and cheer. The glory of our system lies in its flexibility and in our right to challenge that system without fear of retribution. In art, as in life, it is freedom that allows for rebellion, and it’s rebellion that drives change. At its core, this is the essence that Rabble Rousers successfully captures.

See it Now: Rabble-Rousers opens on December 7 and remains on view through March 16, but why wait?
Go now.