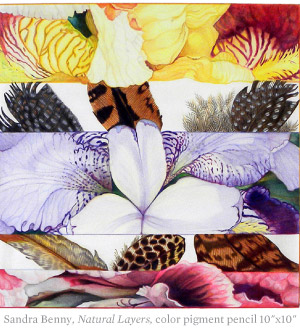 Commemorating three years of existence, 9 East Contemporary Art presents an array of 60 small-scale works crossing a plethora of genres and subject matter. Wall works and sculpture are the linchpin of 60: A Collection Of Original Small Works, the former running the gamut from realistic to abstract. Al Lorenz vividly depicts scenes using pen and ink plus a variety of pigment. Richard Vaux offers boldly non-representative abstract impressionist paintings and works on paper. Among the 3D sculptures, John C. Fink playfully melds mixed media ceramics and random objects and Charles Reina’s sculpted bronze and steel are studies of form and rhythm. The primal tending of a wood-fired kiln was the crucible for the colorful and layered ceramic works by Puneeta Mittal and the complex, ancient anagama kiln helped forge the carved clay indigenous culture-inspired sculptures of Hugh McElroy. 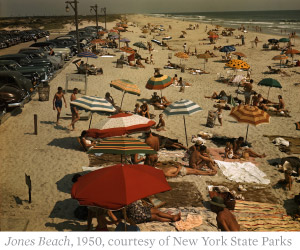 The Long Island Museum’s paean to the local iconic summer destinations of Coney Island and Jones Beach is up for one more month. It is a sunny historical window in 2D and 3D with rare photographs, paintings, prints and archival film clips along with historic beachwear and amusement park artifacts of the two locales. Coney Island’s recreational attractions came first, around the turn of the 20th century and it became known for off-the-rails carnival indulgence. Jones Beach, opened in 1929, was established in direct response to that decadence. LI development legend Robert Moses emphasized low-key classiness in his design and rejected Coney Island’s “honkey tonk,” to use his words. The exhibition covers the many stages of their existence: Heyday, decline and resurgence. A perfect escape while the weather does not permit actually enjoying the parks.

Coney Island and Jones Beach: Empires by the Sea will be on display until December 29 at The Long Island Museum in Stony Brook. (631) 751-0066, longislandmuseum.org.