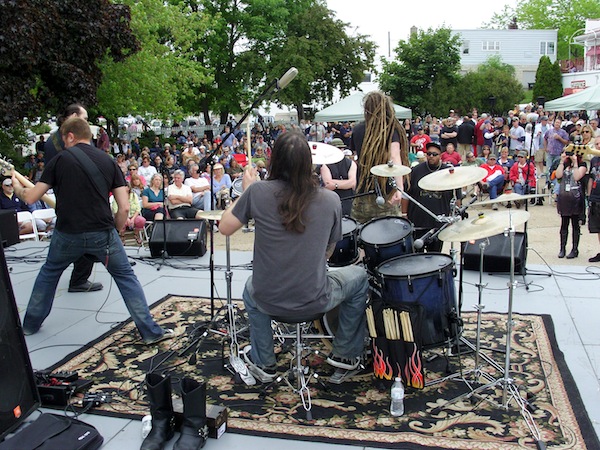 I’m sitting on a main street barstool enjoying the regional counterculture, wedged between a long-haired musician, an organic farmer, and a baseball cap-wearing Korean War veteran. “What brings you here?” the elder vet asks. “I’m here to save the old draw-bridge,” I answer.

“This is still a working waterfront, sir,” the vet notes, adding, “We all do our part.” Obviously the joint’s Sturgeon General, he went back to his beer and I heard the sound of rock and roll that was thumping across town. Strolling toward Door County’s Steel Bridge Songfest, a crusade against callous demolition, the local organic farmer caught up with me and testified, “All food is organic until otherwise tainted—so when it remains organic that shouldn’t be big news. Inorganic foods should simply be labeled as Not Organic.” Pure Wisconsin, here I come. 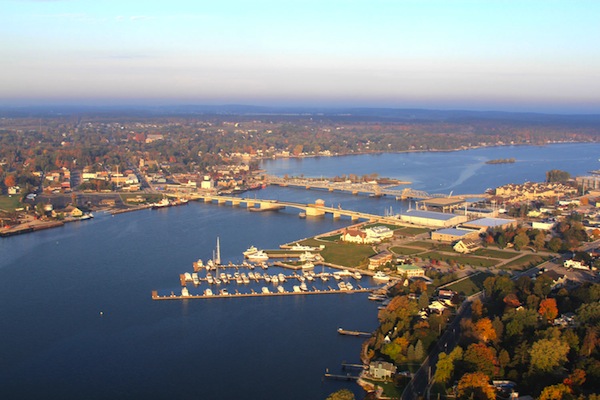 Wisconsin’s geographic left-thumb is a peninsula in Lake Michigan called Door County. This pastoral vacationland—so close but so far from Milwaukee—is home to 11 historic lighthouses, the state’s trending edge for leisure, fine dining and scenery options, Green Bay Packer lore, a music festival that’s hell-bent on saving a big old bridge…and people who are actually curious when they ask, “How are you today?” 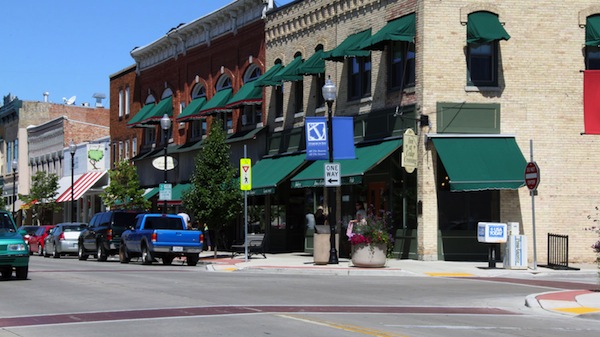 Door County’s hub, Sturgeon Bay, has a long history of boatbuilding, including being an unrivaled shipbuilding powerhouse during WWII. Named by freshwater boaters who called one if its narrow channels “death’s door,” the region still boasts two active shipyards, but is also a haven for cuisine, swank accommodation, water sports, and a taking a break from the rat race. The namesake bottom-feeding sturgeon fish may have been scared away by the building of a transit canal, but Wisconsin’s caring tastemakers are holding steady. Sturgeon Bay’s peaceful main street purrs archetypal Americana, with iconic bargain items peddled by storytellers and brews wrought by wisecrackers. 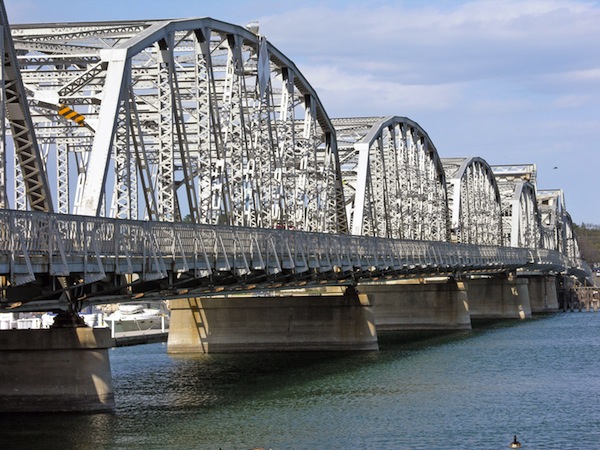 The sensibility of moving forward by honoring the way things used to be done started here in 2005, thanks to assistance from the National Trust For Historic Preservation and funds raised through the Songfest. As a result, Sturgeon Bay’s Michigan Street Bridge has been protected as a national treasure, listed in the National Register of Historic Places. Her 82nd birthday was celebrated in the summer of 2013. The bridge got a long awaited rehab, including an all-new coat of paint in 2011. Since the bridge is now officially “saved,” the Songfest maintains the enduring mission to honor it as a symbol of preservation and creativity thriving together—literally. Not only is the bridge a community builder drawing greater beauty and vitality to its surroundings, it’s also a time to dance in the streets.

The Songfest’s main stage, charmingly, is perched above the parking lot of an early 1950s retro hotel—one that has as many as three recording studios. The bands performing at the Holiday Music Motel (holidaymusicmotel.com) are a musical spin-the-bottle ranging from death metal to Navajo-inspired drum-and-bass to boy bands to North Florida Swamp Blues. It gets better. A frequent festival headliner is Jackson Brown. All this in a small town? 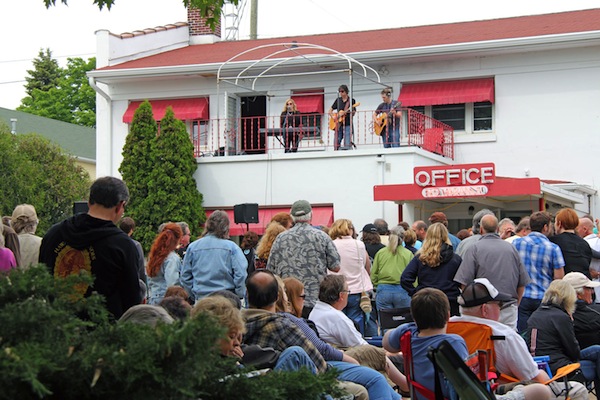 To keep the party moving along, interim bands also perform from a balcony on the second floor of the motel. This four-day outdoor and indoor fest, where several bars and other venues thrive as music venues, seems like an unlikely music destination…but it makes festival-going easy. When the sun sets, bars in town feature motivated bands that rock into the night.

A canon of this festival is that you’ll hear only all original music. What started as a grassroots group called “the SOBs” (Save Our Bridge) 14 years ago, organized to save the historic bridge from a scheduled wrecking ball and later became Citizens for Our Bridge (CFOB), a non-profit to build public appreciation for the historic structure. The week-long celebration is now held every June in and around The Holiday Music Motel. Hundreds of songwriters and musicians from around the world, including Jackson Browne, Jane Wiedlin (Go-Go’s), local hero pat mAcdonald (Songfest creator, author of “The Future’s So Bright, I’ve Gotta Wear Shades”) and others have come to this community, written their songs, and donated their efforts. A seven-disc collection of original songs (Steel Bridge Songs, Vols.1-9) serves double-duty as a testament and a celebration. 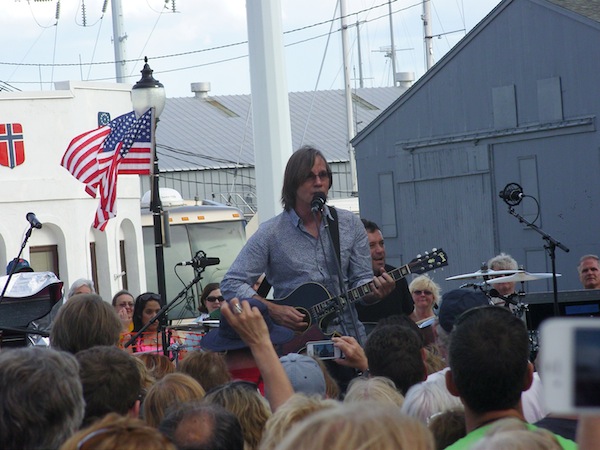 For anyone tuned into the 1970s, you couldn’t help enjoying Jackson Browne’s musical soul taking over FM rock from coast-to-coast. Closing the festival, Browne fused his patient storytelling with a few of his telling hits to rouse the crowd, and assure us all that cozy Sturgeon Bay’s legacy of nurturing original music is moving forward, one song at a time.

*The 2014 Steel Bridge Song Fest is June 12-15, 2014. For performance schedules and other arts-oriented information visit sbsf5.com.

*For more information on “exploring the door” visit doorcounty.com.

*steelbridgeradio.com is a locally based internet radio station broadcasting original, collaboratively written music, live concerts, and exclusive interviews with artists, 24 hours a day, seven days a week. The content of this innovative creation focuses on the collective music written and recorded during songwriting retreats and festivals held at the Holiday Music Motel in Sturgeon Bay. Steel Bridge Radio not only plays the music from the compilation CD’s from the previous nine years of recordings, but also delves deep into the hundreds of archived tracks that have, until now, remained silent.

Ps, this is Miller High Life country: “Miller is made from corn; Bud is made from rice.” —more factoids from tavern-chatting baseball cap-wearing war vet.

The Inn at Cedar Crossing is a crafted-from-scratch restaurant and nine-room B&B. The 1884 building has been a drug store, tailor shop, soda fountain paired with a shoe store, clothing store, and dentist’s office. Today, discerning tourists chat about its presence on facebook. innatcedarcrossing.com

The Door County Coffee & Tea Company doubles as a restaurant in a country store atmosphere. doorcountycoffee.com

Stay at the sprawling Landmark Resort, located atop a bluff with panoramic water views, thelandmarkresort.com

Visit the Door County Maritime Museum, which also has an active boatbuilding shop, where these guys are not posers on display, dcmm.org 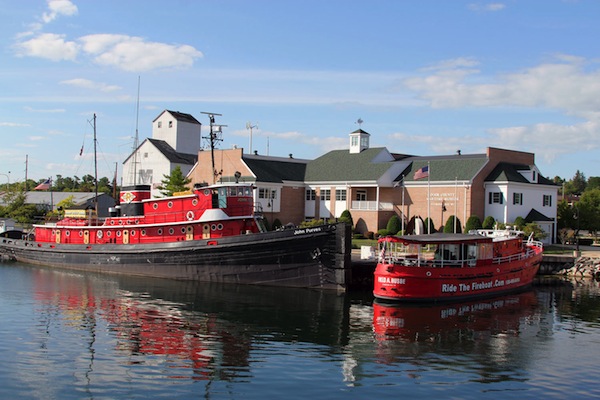 Ps, You’ll likely fly in and out of Green Bay. During a private stadium tour, I was baptized by the Lambeau Field sprinklers—hailed as an American rite-of-passage. This American church, a really big one, is a haloed stadium that’s been sold out since the 1960’s. This tallest structure in Green Bay has the highest grossing pro-shop in pro sports and is the only professional sports franchise that has stockholders. Out for a stroll nearby, I saw the sun set behind the radiant stadium. Back-lit and illuminated at dusk, I felt the awe surrounding the shrine here in Packer-Land, and took another slice of Wisconsin with me to savor back in New York City, where a speeding cab would soon challenge me to cross an intersection. Visit greenbay.com. 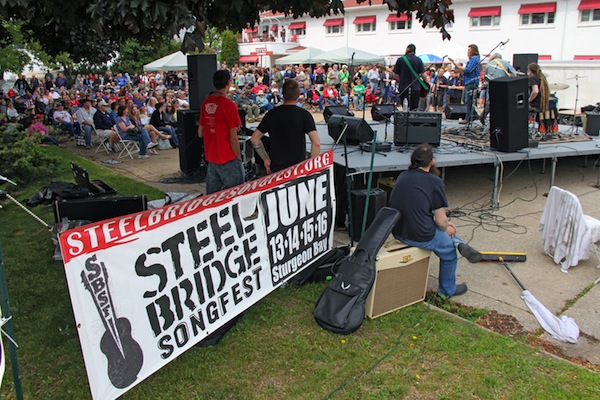