Visiting a mall is a time-honored Long Island experience, even when the season doesn’t call for frenzied gift buying. It is not a very old phenomenon, however. Village Main Streets and small strips of shops preceded the move toward giant malls. And these days—perhaps circling back to a yen for cozier commercial transactions—downtowns are being revitalized and the Island’s three major luxury shopping emporiums continue to refresh themselves to follow suit. It is indeed a pivotal time for these retail centers. Each of the three holds a connection to the country’s cultural history as well as being an epicenter for modern trends: Americana Manhasset anchors the “Miracle Mile” Billy Joel memorialized in his 1980 hit song, Roosevelt Field holds forth at the site of one of Lindbergh’s first flights and the newly-renamed Walt Whitman Shops sits across from the poet’s birthplace. 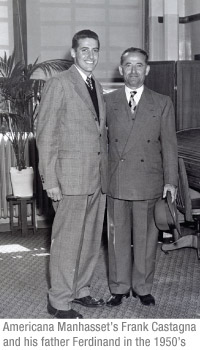 Glamor and All That Glitters
Don’t call the Americana Manhasset a mall. “Oh, no, never,” said Deirdre Costa Major, president of the 14-acre property on Northern Boulevard lined with 60 luxury stores. The names exude glitz and glamor: Burberry, Cartier, Chanel, Dior, Fendi, Prada, Ralph Lauren, Tiffany. Frank Castagna, whose real estate company owns and manages this high-end retail spread, said that he doesn’t consider the word mall “derogatory, but it defines a different style, mostly enclosed and dependent on department stores to drive in business. We are basically a luxury center.” But it wasn’t always as high end as it is today.

Castagna was just out of college in the 1950s and new to his family’s construction company when his father first thought about turning some empty wooded property on Northern Boulevard into a Gold Coast shopping center. According to Castagna, the Miracle Mile had already been launched with a Lord & Taylor on the west side at Shelter Rock Road (still there) and a B. Altman & Company (long gone) next door to where Americana now stands at Searingtown Road. The existing stores mainly catered to the estates that had long populated the North Shore, “going back to the Gatsby era, when the people who owned them could shop wherever they wanted.” But the influx of returning World War II veterans was already reshaping Long Island—including its commercial landscape. Roosevelt Field in Garden City, Green Acres Mall in Valley Stream and Mid-Island in Hicksville (now the Broadway Mall) were all developed at about the same time as Americana.

“We always intended to be upscale,” Castagna said. Saks Fifth Avenue and Henri Bendel were slated to anchor the new center when it opened in 1956, but both bowed out leaving “two big holes.” One was filled by a Waldbaum’s—a nice supermarket, but not exactly a purveyor of luxury goods. Other early stores, according to Costa Major, included Bakers Shoes, a movie theater and Newberry’s, a five and dime.

“It’s been a bumpy ride,” she said, indicating that the first luxury store did not arrive until 1973 when Jaeger, a British-owned high fashion store, moved in. Soon after that Brooks Brothers and a host of boutiques started streaming in and Hirshleifers, an early tenant, was increasingly adding upscale brands like Yves Saint Laurent and Alexander McQueen.

Castagna asserted the evolution represents “a long history of enduring and being successful” that is part of the Long Island mentality in general. In the 1980s another turning point arrived. Castagna brought in architect Peter Marino to give the center a sleeker look, store by store, including limestone façades and careful landscaping. It’s a look—similar to that of Madison Avenue or Rodeo Drive—that helps to position Americana to attract the exclusive brands that make it a world-class shopping experience. Castagna said he once considered putting up a roof, but his site’s narrow configuration would have resulted in “a long tunnel.” Today, improvements are constant, as is community outreach. Because there is no department store anchor, Costa Major said, “we really work hard to drive traffic here” with advertising and events like Champions for Charity, designated days when 25 percent of sales are donated to participating organizations. 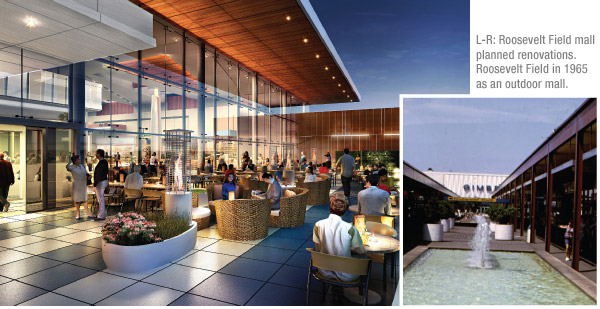 Flight of Fancy
The land on which Long Island’s largest shopping center now sits was an airfield long before it was renamed Roosevelt Field in 1929 to honor Quentin Roosevelt, the son of President Theodore Roosevelt, who was killed during World War I. Pioneering pilots used the land for takeoffs and landings in the early 1900s, when it was called the Hempstead Plains Aerodrome. The US Army owned it from 1916 to 1919, when it became Curtiss Field, the site of many historic transatlantic flights including the famous one by Charles A. Lindbergh in 1927 when he completed the first non-stop between New York and Paris.

The site remained an airfield until 1951 and the mall opened five years later. It started as an open-air mall with fountains and planter beds, serving “the GIs who were coming back and settling in Levittown,” said Nadine Parnell, the general manager of the 111-acre mall. Old Country Road, where the main entrance is, was only a two-lane highway back then and Macy’s was the anchor store and still is, along with Bloomingdale’s, Dick’s Sporting Goods, J.C. Penney and Nordstrom (now defunct Gimbels and A & S were other early anchors).

A Food Fair supermarket, a cinema, a Buster Brown Shoes and a Woolworth’s five and dime—a line-up similar to Americana’s—were part of the early mix. The mall was expanded and enclosed in 1962, with several expansions and changes after that.

Like other shopping centers on Long Island and elsewhere—and like American culture in general—the mall is constantly reinventing itself. The current renovation is scheduled to be completed in 2015 and will include new flooring, a refurbished movie theater and outdoor space for concerts, fashion shows, art exhibitions or other entertainment. It will also expand the selling area with a new “luxury wing” to be attached to a Nieman Marcus. A new second-floor “dining district” will transform the food court to include more sit-down casual restaurants and outdoor dining areas along with the traditional fast-food open-seating eateries. Instead of being the seventh largest mall in North America, Roosevelt Field will move up to fifth largest. But it will hold true to celebrating its history: A statue of Lindbergh’s Spirit of St. Louis will continue to stand at the Old Country Road entrance as it has since 1996. 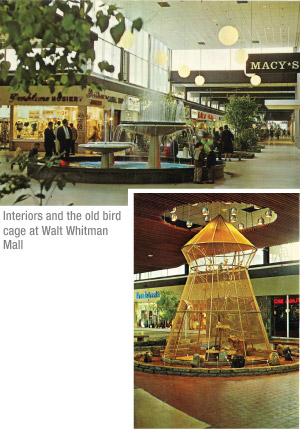 Where Walt Whitman Is Remembered
The grand opening of the newly renovated Walt Whitman Shops in South Huntington took place just before Thanksgiving this year. That turns out to be nearly 51 years after the initial opening of the site, said Nancy L. Gilbert, the director of marketing and business development for the Shops. It was Long Island’s first indoor shopping mall—other malls already existed but hadn’t yet been covered over. “We opened enclosed,” she said. Early advertising emphasized it was the only enclosed and heated mall. In summer, the ads touted “springtime comfort” all the time. “That now seems funny,” Gilbert added, since malls now take pride in their outdoor spaces.

Early on, it was called the Walt Whitman Shopping Center and in 1996 it became the Walt Whitman Mall, a name that was carved into its façade along with excerpts of the poet’s famed Leaves of Grass. The Simon Property Group, which now operates the retail hub (and Roosevelt Field), switched the mall moniker to Shops in 2012, when it began the massive multi-million dollar renovation and expansion that has relocated several stores and added about 15 new ones, including some two-level shops that face outward toward Route 110 instead of inward toward the covered mall. The Simon Group is even including a “pedestrian-friendly exterior streetscape” in the plans, not unlike the village Main Street model.

The mall was built on open farmland, in an area where several branches of the Whitman family had lived since the 17th century and where Walt Whitman was born in 1819. In looking into the mall’s history, Gilbert found some other interesting tidbits: In 1968 Richard Nixon stopped by for a GOP rally to get people out to vote. Earlier that year, Robert F. Kennedy, then a US Senator, also stopped by. Other exhibits and visitors have also made stops here and the mall continues to act as a community center, often for educational or charitable causes, like hosting robot competitions for high school students and giving charities the chance to offer gift-wrapping to customers during the holiday season. After Simon took over the mall in 1999, it added Lord & Taylor and Saks Fifth Avenue as anchor stores, joining Bloomingdale’s and Macy’s. In expanding again this time around, Gilbert said the mix is definitely getting more upscale. “Our consumer base wanted better known stores,” she said. “Our core group is North Shore consumers from eastern Nassau and western Suffolk, and some from the Farmingdale area because of Route 110,” which provides easy access from nearby South Shore communities. The new stores include Anthropologie, Henri Bendel, Hugo Boss, kate spade and Swarovski. Relocated stores include bebe, Brookstone and Godiva. Dining options have improved too, with a Brio Tuscan Grille and P.F. Chang’s now part of that outward facing “streetscape.”

The mall’s original décor included live birds in cages, which Gilbert remembers coming to see as a small child. “Maybe the idea was to bring the outdoors indoors. They also had fountains and interior gardens.” The original stores were “everyday type stores” aimed at families. They included a Bond clothing store for men, Flagg Brothers shoes, Fanny Farmer’s candy, Buster Brown and Sam Goody records. Customers today want more services and amenities, like “holiday helpers” to carry shopping bags to cars and a periodic “mom’s night out” with special sales and mini-massages.

The trend toward ever-ritzier stores reflects a global shift, Gilbert said. “I don’t think our society was as fashion conscious [in the 1960s] as we are now.” Long Islander Billy Joel saw that change coming more than 30 years ago when he penned It’s Still Rock ‘n’ Roll to Me:

Don’t you know about the new fashion honey?
All you need are looks and a whole lotta money…