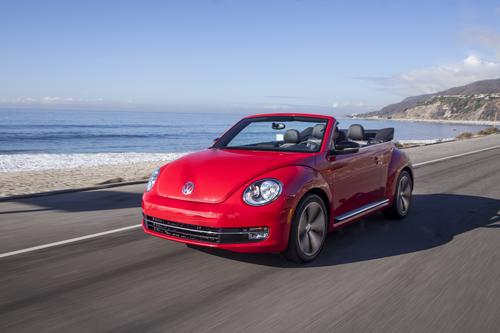 Most people have a soft spot in their heart for the Bug because it was popular in the 60s, man.

My sentimental feelings for the peanut-sized Beetle, though, are because it was the first-ever car I reviewed back in 2000, when “the net” was still something you threw over a crazy person. Since then, I haven’t exactly been infested with test Beetles, but I have had four for a week each.

You want to know how rockin’ the 2014 Beetle is? I had given back a Rolls-Royce Ghost in exchange for the Beetle, and I didn’t mind at all. Why would you mind a pint-sized powerhouse with a quick-dropping roof, a rich sound system, plenty of room for your crizzap, and being able to park it in a postage-stamp sized space in midtown Manhattan for no money? No need for a “my other car is a Rolls” sticker. 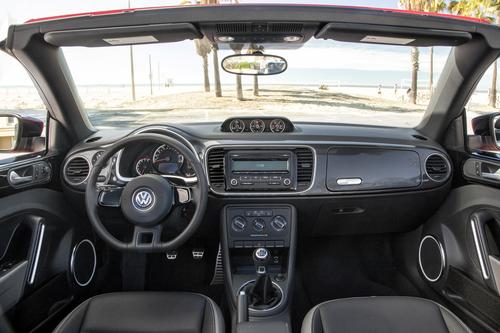 My first Bug of the two—the Turbo—shares suspension, a 6-speed manual transmission and a 200 horsepower 2.0 litre engine with Volkswagen’s GTI hatchback. It won “best engine,” but the ice-cream white exterior reminded me of a refrigerator. The second Beetle was red—much better color—but its Diesel engine was a total lug, with no fun in the acceleration and a supposed driving expert—me—still stalling out 5 days after I had the car. Note to self: Give it a LOT of gas before letting go of the clutch. Couple of ladies in a parking lot snickered at me one time when I stalled, too.

I leaned on the Turbo for the entire test, wanting to see how much it could take and how it responded to a heavy-handed, heavy-footed driver, and I was pleased it returned each serve with a strong response of its own. Curves were hugged at high speeds, brakes were smashed and the car instantly halted, and available freeway slots were reached quickly when I stepped on it.

It’s got a 2.0 litre turbocharged 200 horsepower engine, a welcome stability control system, ABS brakes, independent front and rear suspension, a tire pressure monitoring system, and all the latest safety features. In fact, if I was going to hit something and had a choice of small cars to do it in, I’d pick this thick-walled, sturdy peanut.

The small-convertible market is busy these days, but the Bug squashes all competitors. 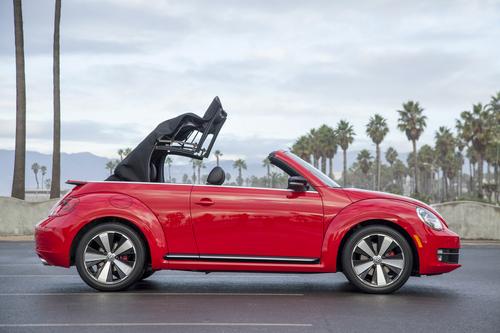 More info, including a variety of Bugs offered this year.