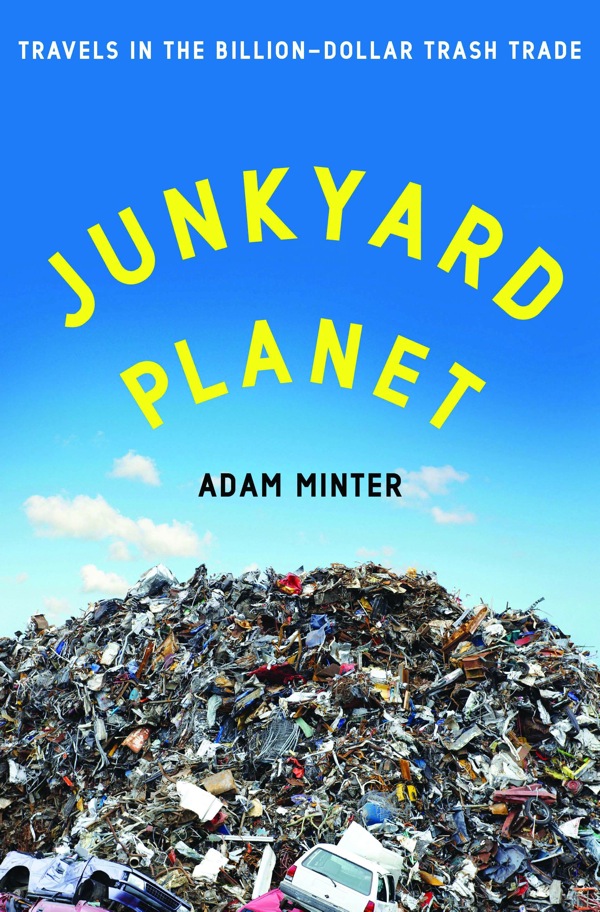 This will probably be the last year for your old Christmas lights.

You’ve noticed that the bulbs are half burned-out and replacements are hard to find these days. Besides, you’d really rather have those newfangled lights anyhow; they’re energy efficient and they look nicer.

You’re going to recycle those old twinklers because it’s the right thing to do. But where do they go after you’ve put them in the bin? Read “Junkyard Planet” by Adam Minter, and you might be surprised to find out.

For most of his life, Adam Minter has been intrigued by junk. You could almost say it’s genetic—his father and grandmother owned a Minneapolis junkyard—and since he’s already a journalist working in China, trash is relatively easy to investigate.

China , you see, is where a lot of America ’s scrap—cell phones, electric motors, plastic, construction debris, Christmas lights—ends up. Says Minter, it’s “the most logical (and greenest) endpoint…”

When you put something in the recycling bin, you’re really, in some respects, throwing away money. Yesterday’s newspaper, an empty detergent bottle, your old computer, that junker in your garage will eventually all be bought, sold, and either picked apart here in America or shipped overseas to be processed and metals reclaimed.

“… the richer you are, and the more educated you are,” says Minter, “the more stuff you will throw away.”

And throw away we do: Minter says that, in 2012, U.S. scrap workers “were responsible for transforming 135 million metric tons of recyclable waste into raw materials that could be made into new stuff.” Exporting other trash for processing saves low-grade scrap from being dumped in a landfill. Together, that lessens environmental costs.

As for financial costs, Minter says it’s often cheaper for U.S. scrappers to send materials overseas than across the country. Despite that safety is often iffy there, overseas facilities offer employees better-than-farming wages and opportunities for family businesses. And besides, “the developing world can usually find a use for what Americans can’t recycle profitably,” sometimes returning to us a re-recycled item, ready to use again.

Says Minter, “Round and round it goes.”

“Junkyard Planet is a good book—and it’s not.

Because it takes a lively look at the symbiosis between American and Chinese trash trade, there’s a lot of back-and-forth-across-the-ocean here, resulting in what feels like a good amount of repetition. The facts that are highlighted in this book are quite shocking, but author Adam Minter throws them around like confetti on New Year’s Eve. After awhile, it’s hard to be impressed by them anymore.

And yet—there’s something to be said about a book that offers solid, deep scrutiny of a “hidden,” big-bucks industry that makes something good from an out-of-sight, out-of-mind mentality.

Overall, though it takes time to absorb, I think that if you’ve ever thrown something away and figured it would magically disappear forever, this book will disabuse you of that notion. For you, or anyone who wants to know where America’s recyclables go, “Junkyard Planet” will show you the light.