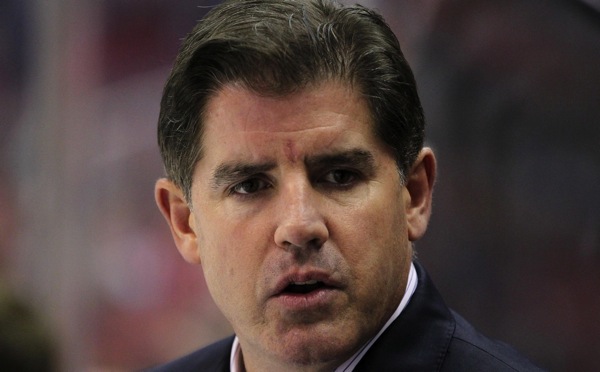 Something has to give. The Islanders have lost nine in a row and 14 of their last 16 games as of Monday afternoon. After last season’s sudden and exhilarating charge to the Eastern Conference playoffs, the Islanders looked like they were headed in the right direction.

John Tavares was a Hart Trophy finalist. They nearly knocked off the mighty Penguins in the first round. Fans had lit a fuse in the Coliseum and all seemed well again for a change in Uniondale.
That all seems so long ago now and it was only a few months back. It’s dark and abysmal this season around Orange & Blue country. It all happened so fast. A season that began with much promise, that seemed even more promising when the Islanders acquired Thomas Vanek from Buffalo, has all but finished itself before the midway mark. It would take a herculean effort to get back from this.

Jack Capuano earned a ton of respect after how he guided the team last year. He carried himself with poise and confidence. He slowly crept up the all-time rankings and sits second all-time in franchise history for victories behind Al Arbour; albeit way behind the legend, but still.

Now though, something has to change. You can’t change the roster too much. You may be able to trade for a goalie, or bring in a defenseman, but at what cost? Is it worth trading strong prospects, or a possible high-end draft pick if they keep up this pace? Probably not.

The rumor of former Isles coach Peter Laviolette coming back into the Islanders mix has been widely reported and most agree that he’ll infuse life into this lifeless group. One scribe from Yahoo nailed it, saying that Capuano is the coach that gets a team to a certain place, and Laviolette is capable of bringing them to an even higher level.

And other NHL officials know this too, so you can be certain he’s high on a bunch of next hire lists. Laviolette has a Stanley Cup ring and he’s a proven winner now. It took getting fired by Mike Milbury, leaving the confines of Nassau County and landing in Carolina to win big, but he has the respect and ear of other teams. Forget his stint in Philly. He wasn’t a good fit there. He knows the Island, he knows the franchise and the fan base and he’s hungry. If you’re going to make a move, make it now.