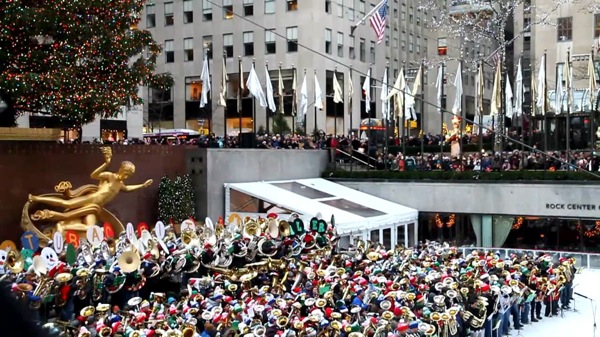 Head to the ice rink at Rockefeller Center on Sunday at 3:30pm for the annual Tuba Christmas concert featuring hundreds of tuba players lined up—with their sousaphones, baritones and euphoniums—to play Christmas carols beneath the golden statue of Prometheus and the glorious Rockefeller Center Christmas Tree.

Players come from all over the East Coast for this unique event which began at the rink in 1974 and has become a ritual in over 200 cities around the world. Tuba Christmas originator Harvey Phillips was paying tribute to his teacher/mentor William J. Bell, who was born on Christmas day in 1902 and played in the New York Philharmonic and the NBC Symphony under Arturo Toscanini. Forty years later, Tuba Christmas is a holiday tradition celebrating those who teach, play and compose music for instruments in the tuba family around the world.

Tubists of all ages are asked to wear bright colors and register at 11:30am in order to rehearse the carols arranged for the first Tuba Christmas by American composer Alec Wilder (who ironically died on Christmas eve in 1980).

Spectators are encouraged to sing along to the Christmas carols and holiday classics conducted by Chris Wilhjelm (of the Goldman band). The plaza fills up fast so get thee to 49th and 50th Streets btw 5th and 6th Avenues well before the 3:30pm start time on Sunday, December 15th.