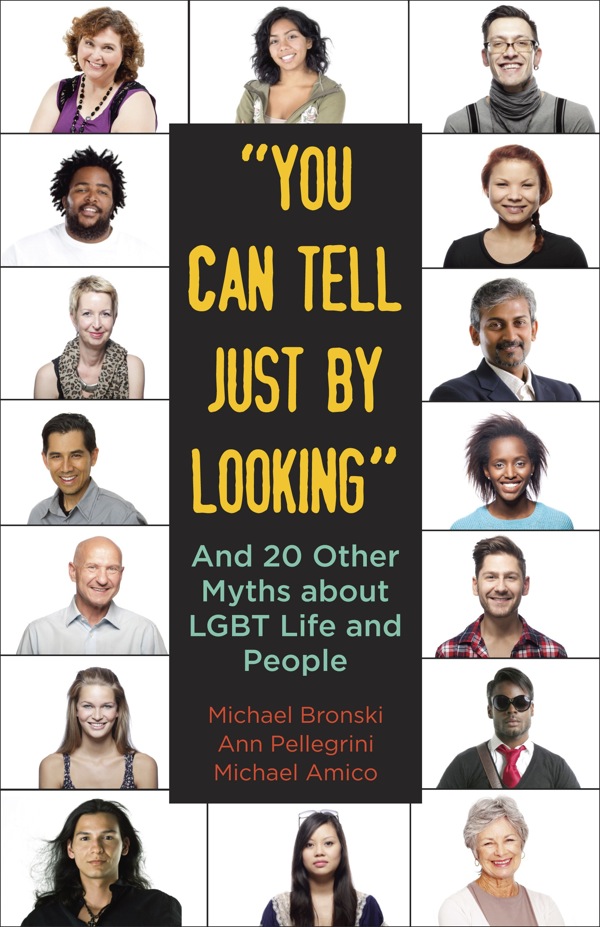 You’ve been hearing rumors. You don’t know what to believe.

Your favorite club is closing, it’s got new owners, it’s being remodeled, none of the above. You can get married anytime, the law is being repealed, it’s being approved. You’re being downsized, you’re getting a raise.

Sometimes, you don’t know what to think. Other times, you think you know but you’re wrong. In the new book “’You Can Tell Just By Looking’ And 20 Other Myths about LGBT Life and People” by Michael Bronski, Ann Pellegrini, and Michael Amico, you’ll see where truth and misconception cross paths.

For most of your life, you’ve probably heard how no one person is better than anybody else. We’re all created equal… or are we?

Thinking, for instance, that LGBT people are “the same as” straight people “obscures the fact that specific everyday realities and social structures have shaped the lives of LGBT people very differently…” say the authors. Even the term “LGBT” ignores that L, G, B, and T are “all distinct experiences.”

Take, for instance, the notion that “gaydar” is more than just intuition, “a skill that everybody… has.” While research shows that lesbians and gay men can identify other lesbians and gay men better than can straight people, it may only be a matter of desire or empathy.

Or consider the myth that homophobia masks a straight person’s true desire. That belief came from something published more than fifty years ago; the author took the thought in a different direction, but “it became the main idea people took away from the book.”

Same-sex marriage does not “harm” marriage as a whole; in fact, it may “make for happier heterosexual couples.” Not all religions “condemn” homosexuality; no one race is particularly biased against it; parenting has nothing to do with the sexuality of the mothers or fathers (“good parenting… is not a biological given”); bodies and sexuality are “complicated;” and it’s not necessarily easier coming out today than it was a half-century ago.

Though your Mama warned against such things, based on the cover, you might think that this is a fun kind of book. And you’d be disappointed.

No, “’You Can Tell Just by Looking’” is filled with deep-thinking research-based information and no-nonsense answers to “myths” that may or may not be widely-rumored. It’s wordy to the extreme, and – though authors Michael Bronski, Ann Pellegrini, and Michael Amico claim that LBGT readers believe myths about themselves—I often wondered if this book was preaching to the choir. There’s a whole lotta overgeneralization goin’ on here, too.

Still, the authors don’t shy away from controversy; they tackle some tough (and food-for-thought) ideas with thoughtful inspection. I appreciated that lack of fear and the willingness they had to confront ill-conceived credos.

Overall, I think that if you’re searching for retorts to blanket-statements about LGBT people, this book may give you what you need. It won’t be the most fun thing you’ve ever read, but “’You Can Tell Just by Looking’” is one I believe may help.