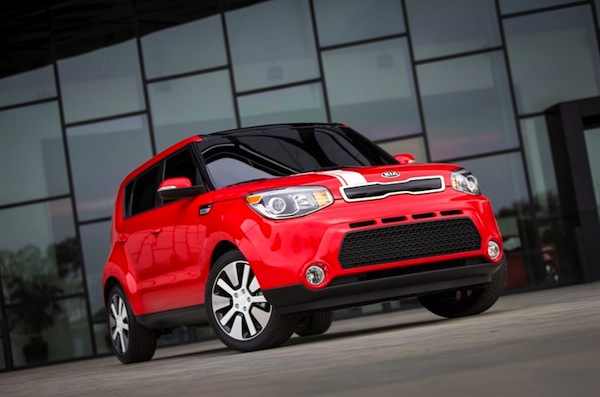 Honda’s giant-kitty-carrier Element was a big success upon launch in 2003, followed by the horizontal-refrigerator Scion xB in 2004 and Nissan’s hip-to-be-square Cube not long after. The Kia Soul, another breadbox-ish car, came late to the party, launching in 2010, but it’s already outlived the Element, which ceased production in 2011, and it’s outselling the Scion xB. Clearly, the fun, runty Soul, with its putt-putt 4 cylinder engine, tiny dimensions and handy interior compartments galore, is doing something right. It’s also Kia’s best-selling model in the U.S.A.

As a get-around car, one you might gift to a newly-licensed son or daughter who isn’t going anywhere near your Benz until they can prove they’re not going to drive it into a fence, the Soul excels. It offers all the amenities and extras found in rides costing far more, such as heated and cooled leather seats, a panoramic glass roof, an iPad-style user interface, a 350-watt Infinity sound system and more. Sure, it takes potholes on the jaw, and its reactions are slightly numb. Where it rocks, though, is in its unique looks – I found my mustard-colored test model within seconds even in vast parking lots—and its ability to hold much gear, whether a set of drums, a load of wood or other transportable goods. The trunk isn’t gargantuan, but fold the seats down, get creative with packing and you’ll do fine.

The Soul’s also got a sense of humor in its optional door-mounted speakers, blinking red to whatever music you choose on the fully-equipped sound system. The speakers, like your Uncle Phil at Cousin Louise’s wedding, don’t move in any particular rhythm, though you may be fooled when you first watch them while listening to music. Rest assured, however, the speakers don’t have a speck of a clue as to beat. To top off the fun factor, Kia calls its optional package the Whole Shebang, probably to distract us from the fact that the package brings the sticker up to $26,195.