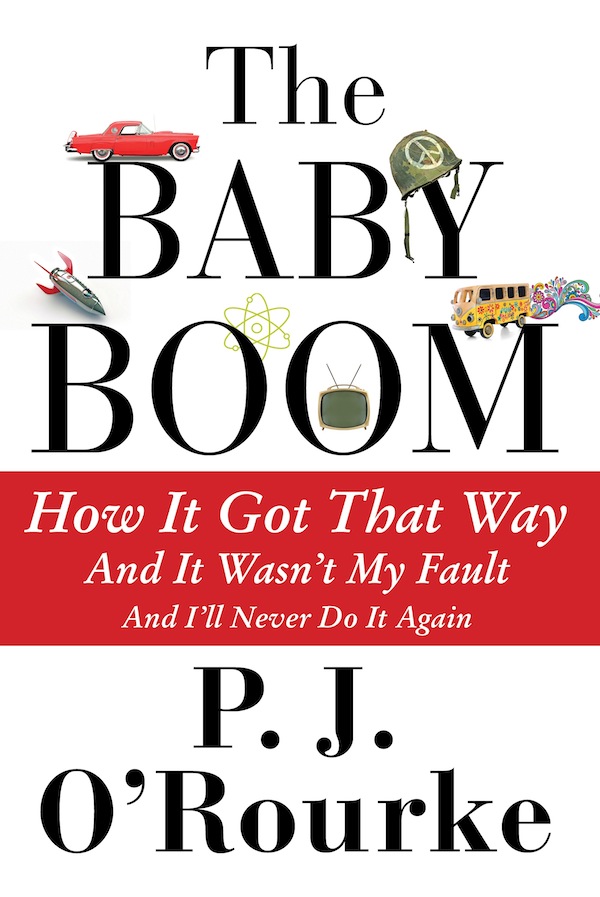 Whenever you get together with old friends – no matter what the reason – it always ends up with “Remember When…?”

Remember piling in the station wagon, scrambling for a good seat in the back? And when your sister chased that bully away? He was bigger than she, but twice as scared. And remember cruising down Washington Avenue in a convertible, top-down?

Ahh, those were the days: fun then, fun to recall now. And when you read “The Baby Boom” by P.J. O’Rourke, you’ll remember even more of them.

To write about the Baby Boom is to tackle a big project: There are more than 75 million of us, born over the course of nearly twenty years. There are times, in fact, when “the oldest Baby Boomers are sometimes the parents—usually via an oopsie—of the youngest Baby Boomers.”

Basically, though, Baby Boomers can be sorted, much like high school, into seniors (at the beginning of the Boom); juniors (born in the early 50s); sophomores (late 50s); and freshmen (born at Boom’s end). This book, written by a “senior,” nonetheless holds memories for all Boomers…

Memories like getting a new TV, though the people on television were generally members of the “Silent Generation,” born between our parents and us. Later, they’d be the “anyone over 30” we weren’t supposed to trust.

When we went anywhere in our parents’ big-finned cars, we rode in the front seat, often standing up. Houses had one phone, connected to the wall, but we rarely used it because yelling across several yards was the preferred neighborhood method of communication. People wrote letters, too, or they just “dropped over,” no appointment necessary.

Kids played outside a lot then, and parents liked it that way. Games were fair, it didn’t matter who won, and “we ran wild—in a rather tame manner.” We learned the Facts of Life (and didn’t want to believe it), we spied on one another, blew things up, had crushes, were embarrassed by our parents, and were told that we could “be or do anything.”

It was, says O’Rourke, a “good and happy place” to grow up.

Though it does sometimes descend into curmudgeon territory and can seem somewhat growly, “The Baby Boom” really is quite a pleasure.

Despite that author P.J. O’Rourke was an early Boomer (a “senior”), there’s plenty of Universal Boomer Truths here, and lots of nostalgia for anyone born between 1946 and 1964. O’Rourke (largely) ignores his usual topics in this book, instead bringing back the kinds of memories that occur when family and friends gather—though politics peek into the latter half of the book, and sarcastically profane humor isn’t missing, either. Overall, that will appeal to hip first-time readers without disappointing long-time fans.

Better than an Ed Sullivan marathon; more enjoyable than Beach Boys Radio Weekend; more fun than cleaning out your parents’ attic, this book is a Boomer’s delight. If your bags are packed for a trip down Memory Lane, “The Baby Boom” is a book you’ll want to remember to take with you.