No teammates, no substitutions, no timeouts, no breaks in the action. In skeleton racing, or the headfirst luge, it’s pretty much no nonsense—just one person, one sled, a mile of ice and a healthy serving of guts. Smithtown’s John Daly, has one goal in mind in his second trip to the Winter Olympic Games—gold.

He is America’s best skeleton racer, its brightest hope to bring home the Olympic medal; it hasn’t done so in skeleton since 2002. Four additional years’ experience and a crucial mishap in the 2010 Games—to serve as a lesson learned rather than an anchor—are part of the preparation Daly’s undergone. And he is ready to make a run at that top spot on the podium.

“A gold medal would be the pinnacle of a dream,” said the 28-year-old. “I’ve worked so hard for it, and I, like probably everyone else, at some points don’t think it’s ever going to happen. But I get to live a dream twice.” He’s traveled all over the world to pursue his dream, but Smithtown has always been home and he credits his upbringing there for all that has followed. “If I didn’t go to Smithtown High School,” he said. “I never would have been an Olympian.”

Finding an Identity
Born in Queens, Daly and his family lived in Patchogue before moving to Smithtown when Daly was in fifth grade. He was a ball of energy and although this made him a headache for some teachers, his athleticism was undeniable. He caught the eye of Leonard Carolan, a gym teacher at Smithtown High School whose son had done the luge. In 1998, he encouraged Daly, then a sixth-grader, to consider it for his own future. Two years later, Daly tried out for the US luge team, attending one of its East Coast screening camps in Lake Placid. He aced the best by churning out pushups and sit-ups and completing obstacle courses. However, while Daly started in the luge, he was soon lured to skeleton.

“I was always disruptive in class, but Mr. Carolan saw something in me that most teachers didn’t,” Daly said. “He saw that I just needed time to get rid of some of that energy. And he knew that there isn’t just baseball and football and soccer; there are other things out there that were good for me.”

Discovering skeleton coincided with the end of another career: BMX racing. From age 8 to 14, Daly traveled nearly every weekend to a different race in a different place and at one point he was ranked as high as 10th in the country. This was before extreme sports had really gained traction in the mainstream and well before its admittance into the Olympics as a medal sport in 2008.

“I was always disruptive in class, but Mr. Carolan saw something in me that most teachers didn’t.”

“If everything stayed as is, when I turned 18 I would have been one of the top-ranked pros in the country and possibly the world,” Daly said. “If someone told me back in the day that BMX would one day be in the Olympics, I might never have switched over to skeleton.”

His BMX career skidded to a halt during one weekend in Louisville, KY, site of the National Bicycle League (NBL) Grand Nationals. In what one ESPN.com writer called “the most spectacular fall I have ever seen,” Daly broke both of his wrists in a vicious crash. From then, he focused his attention on the newest means of getting an adrenaline rush: Skeleton.

His development in the sport came at the expense of other winter activities. Daly wrestled for two seasons but because the daylong Saturday tournaments conflicted with his trips to Lake Placid, he had to turn in his singlet. During warmer months he ran track all four years at Smithtown High, capturing the county championship in the pentathlon his junior year—an event that features the 110-meter high hurdles, long jump, high jump, shot put and 1,500 meter run. “At the time, I was thinking ‘this is big time,’ and it still is to me,” Daly said. “It’s like footsteps; you can’t be a national champion or an Olympian without being a county champ first.”

His track career continued into college, where in 2007 Daly became a Division III All-American decathlete at SUNY Plattsburgh, a mere 50 miles northeast of Lake Placid. The decathlon worked hand in hand with his development in the skeleton and he slowly climbed up the US ranks. In January 2010, he received word that he would compete in the Vancouver Games.

Anatomy of a Skeleton Race
Another Long Islander, Jerry Seinfeld, joked that the luge is “just a human being hanging on for their life.” The skeleton is only slightly different. While lugers sled feet-first, skeleton racers hurtle down the track head-first, belly-down, arms to their sides and legs straight back. “It was like all the times we grabbed a garbage can lid and slid down the driveway,” Daly said.

The race starts with competitors pushing a 70-pound sled on a grooved track for 30-meters. In a sport that measures success and failure down to fractions of a second, how fast they explode off the starting line is key. Racers then jump on and, in Daly’s words, “are free to take that sled wherever you want.” 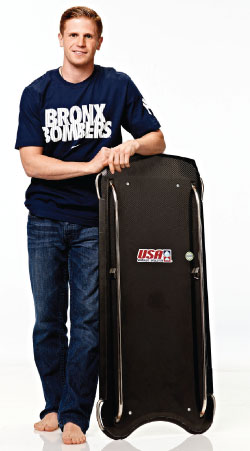 “Every curve you’re getting faster and faster…you’re just trying to slow down the least,” he said. “It’s important to relax. You need to let gravity take over and drive the sled in the right place. If you’re going good, the ride is smooth and it’s almost like you’re dancing with the sled. You’re not fighting anything. It really does feel like you’re on a ride at an amusement park.

“There’s a middle line through every curve and sometimes it’s hard to get that middle line,” he continued. “You have to know when and where to steer. I never think about two to three curves down the track because I might never get there.”
Every skeleton run is one mile with 19 curves. The elite racers top out near 90 miles per hour, covering the stretch of ice in 55 seconds or fewer. Over time, Daly has found a way to control the sled just enough to maintain speed and contain his nerves. He’s crashed just twice in his career—once as a rookie and again last year—and walked away with nothing more than scrapes on his helmet.

“I feel safer going 90 miles per hour on my skeleton than doing 90 on a highway,” Daly said. “All the problems and the crashes happen in the first year. If you can make it through that, you’re golden.”

A Second Chance
Daly recalls the very moment when his own Olympic flame was ignited. It was 1994 and speedskater Dan Jansen looked for redemption after his infamous performance in the ’92 Games. Daly’s mother leaped off the couch and yelled “We won!” when Jansen, wearing the letters “USA” across his back, captured Olympic gold. Since then, Daly has wanted to be the reason that his mom and millions of Americans celebrate our country.

His first opportunity came in 2010 and the memories of Vancouver are still vivid. The memories of the Opening Ceremonies, the Olympic Village and the pageantry were good. His on-ice experience however, was not. Daly was pleased to make the US National Team back then. Due to poor racing performance, he’d been removed from the team in December 2009, just weeks before the Games commenced.

But he won seven straight races on lower-tier circuits to earn his way back. Upon arriving in Vancouver, his tempered expectations gave way to a go-for-broke approach. As a result, Daly’s medal dream was squelched 20 seconds into round one.

“The more you steer, the slower the sled goes; the less you steer, the less control you have,” Daly said. “You’re building speed over and over again. On curve five, I rolled onto the shoulder and unfortunately what goes up must come down. At that point, I knew I was out.”

But that was four years ago. Daly has lived and trained year-round in Lake Placid since then, all with redemption in Sochi in mind. Europeans have dominated the skeleton in international competition, but Daly hopes his own Olympic dreams come to fruition this month. He came in ninth overall in the 2012-13 Skeleton World Cup, finishing fourth in individual races twice. The first came in Lake Placid. The other? Sochi. The Cup started in Canada in November and the US before finishing up in Europe in January. And then it’s off to Russia.

“I wouldn’t say I had a shot at a medal if I didn’t,” Daly said. “Realistically, I know I can do it. It’s just a matter of whether I can do it on that day.”