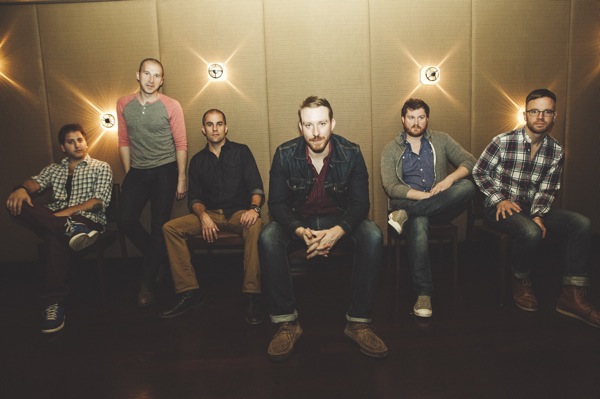 Smoke in the sky and fire in the air
Desire burns between them
One big push is gonna get you there
It takes a stronger eye to see them…
Lead your way, keep on strong
Moving everyday, going further on

From “Further On” by Bronze Radio Return

You may have heard the music of Bronze Radio Return on American Idol, 90210, a PGA Tour commercial or an MSNBC promo. That’s because the Connecticut-based sextet’s songs can be heard in over 50 commercial and TV spots. Their song “Shake, Shake, Shake” even went global in an international Nissan Leaf campaign.

Named after an old radio owned by the frontman’s father, Bronze Radio Return—vocalist/guitarist Chris Henderson, guitarist Patrick Fetkowitz, keyboardist Matt Warner, drummer Rob Griffith, bassist Bob Tanen and multi-instrumentalist Craig Struble—met at The Hartt School of Music in Hartford and solidified their lineup in 2008. The indie folk rockers realized they all grew up listening to roots music and their latest full-length, Up, On & Over, was recorded on a farm in Virginia in the foothills of the Appalachian Mountains.

“I think there are strands of Americana in what we do,” says Henderson. “I hear a lot of elements of folk music in our songs. It’s always hard to point at one genre because we like to infuse a lot of different genres into what we do. The trick is to be able to have a collection of diverse songs, textures and messages and still have a cohesive sound that defines the band. That is something we work towards and will continue to evolve as we go on.”

The band’s upbeat music and foot-stomping, hand-clapping performances have been compared to that of The Lumineers, and Bronze Radio Return has opened for acts like Grace Potter & The Nocturnals, Buddy Guy and John Mayer. They even had the pleasure of playing at a 2010 rally for President Obama emceed by Russell Simmons in Bridgeport, CT.

“We have a wide range of musical influences ranging from John Coltrane and Ryan Adams to David Byrne and Ben Harper,” notes Henderson. “I think it would be fun to tour with a really high energy band that brought out loud, fun and rowdy crowds. The Avett Brothers and The Black Keys come to mind. I would also love to tour with someone through Europe because that’s a place I’ve always wanted to explore.”

Until then, BRR will continue touring venues across the US, including festivals like SXSW. No strangers to Long Island, the band’s first show ever was in Amityville (Fetkowitz is a LI native ) but the group will return to NYC on Wednesday, January 29th to play the Bowery Ballroom.

“We’re excited to play the Bowery,” says Henderson. “New York is one of our favorite cities to play and we are fortunate to have a growing number of people that support us there. They also have the best street meat in all of the country.”