Secret passageways and trap doors led to the attics, cellars and crawl spaces where fleeing slaves were once hidden on the branches of the Underground Railroad that may have wended through Long Island. Most people know that trains were rarely involved in any part of the national escape network. Wagons, ships and walking, often in the shelter of night, were the modes of transportation—but there is a connection between the Underground Railroad and the Long Island Rail Road (more on that later).

From the late 1700s until 1865, when the United States finally abolished slavery, an estimated 100,000 enslaved people escaped from the South and traveled along secret routes to the abolitionist North and into Canada. These circuitous and arduous paths toward freedom came to be called the Underground Railroad, though no one knows just how many routes composed the network. Such recent movies as The Butler and 12 Years a Slave have helped focus the American consciousness on the horrors of slavery and the hopeful glimmer of escape. With Black History Month, February brings an added spotlight.

Because helping slaves to escape was illegal, barely any hard evidence exists about escape routes or safe houses. But, according to family stories and community folklore, fugitives found temporary refuge through a second-floor cupboard door at the Maine Maid Inn in Jericho, the attic of a farmhouse in Westbury, the cellar of the St. David AME (African Methodist Episcopal) Zion Church in Sag Harbor. At these and other spots, free black people and white people who opposed slavery hid a few escaping slaves at a time and helped them on their way to an unshackled life.

“It’s so hard to document much of this information,” said Georgette Grier-Key, director and chief curator of the Eastville Community Historical Society in Sag Harbor. “But I really believe in these stories, because they are powerful. It’s unfortunate that they can’t be validated, but that is often the lot of poor people.” Her society is planning an exhibition on quilts, which many scholars believe contained hidden messages about the routes to freedom, as perhaps spirituals did as well. 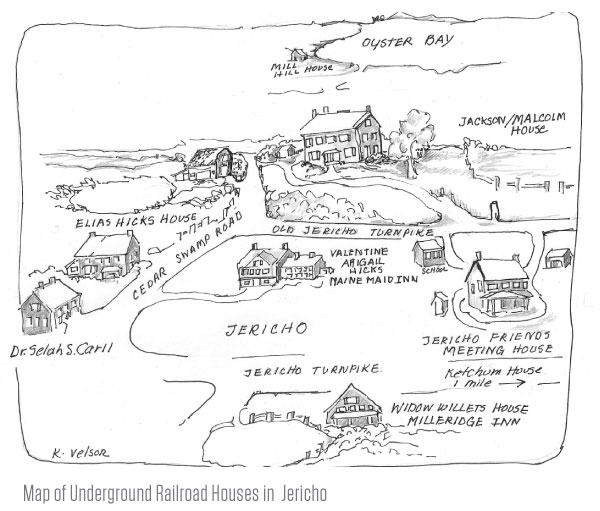 The Eastville society, founded in 1981, has helped to restore and maintain the St. David AME Zion Church and the adjacent cemetery that the historical society owns. The church still goes by the name it had when it was built in 1839, but a different congregation occupies it now. According to Grier-Key, Rev. J. P. Thompson, the founding pastor of the multi-ethnic church, was a noted abolitionist and a friend of Frederick Douglass. Thompson and his wife Mary are buried in the cemetery. Though some contend that escaping slaves were hidden in spaces beneath the pulpit or choir stall, she thinks it more likely they entered a crawl space through a trap door in the back, under a library.

“When you were escaping, a lot of places were very small. You could stretch or maybe you could sit and do some exercises, but you couldn’t walk around.” The church’s proximity to the harbor, a major shipping port, was important because it afforded easy access to Connecticut, an active abolitionist state one step closer to Canada. A few cottages around the church, on Eastville Avenue and Hempstead Street, also have trap doors leading to secret compartments, but they could have been used to hide valuables or fugitives from the law rather than slaves. “If someone comes across a diary or something, that would be a great thing,” she said, pointing to historians’ common reliance upon the community to gather evidence.

Once she started asking questions, people came forward with stories. “So many people were involved in a very secret way,” she said. She has identified the Mott Homestead in Port Washington as one of the county’s hubs. Robert Mott, a grandson of the original owners, is thought to have brought escaping slaves from New York City by sloop to transport them across the Sound to another Mott house in Mamaroneck. Also on her list is a Westbury home referred to as The Old Place where slaves were brought by wagon from New York City and hidden until they could be brought across the Sound. In Wantagh, she found an area once known as Jerusalem. Many freed slaves came to work in its lumber mill (owned by the John Jackson family) and established a community called The Brush. Within that community, escaping slaves could be passed off as free men and women—hiding in plain sight.

Another likely site is the Jackson/Malcolm House in Jericho. It had a secret attic school where escaping slaves were taught reading, writing and other subjects to blend in better with freed men and women and thus escape detection. Valentine Hicks and his wife Abigail were also known to hide and help slaves. Their home became the Maine Maid Inn, a prominent restaurant that is currently closed. Valentine Hicks was the second president of the Long Island Rail Road—there’s that improbable link. Abigail, his wife and second cousin, was a daughter of Elias Hicks, a minister in the Society of Friends (Quakers) whose anti-slavery speech in 1775 and other abolitionist talks and writings influenced many slave owners to free their own slaves. (Slavery was widespread on Long Island; New York State didn’t abolish slavery entirely until 1827.) Velsor believes his preaching had a national impact that helped lead to the Underground Railroad. “I think he was responsible for how people felt.”

Not everyone is as convinced about the factual basis of these Long Island rescue tales as Velsor. “I’m skeptical,” said Natalie A. Naylor, a retired Hofstra University professor and the current president of the Nassau County Historical Society. “It’s something that it would be nice for your ancestors to have been associated with. It’s a sexy topic.” That doesn’t mean that there were no stops, she said, just not as many as Velsor counts. Naylor thinks that local maritime activity would have been a plus for fugitives, especially since many freed slaves worked as sailors. And she cited likely spots mentioned in Lynda R. Day’s Making a Way to Freedom: A History of African Americans on Long Island, published in 1997 when Naylor was the director of Hofstra’s Long Island Studies Institute. In addition to St. David, Day identified AME churches in Lakeville (Manhasset) and Westbury. She also outlined the Quaker connection and mentioned John Wheeler, a caretaker at the Friends cemetery in Westbury who “was known to be an escaped slave who came to Long Island through the Underground Railroad and decided to settle here.”

Meanwhile, Velsor continues to dig for information. “Every day the story unravels.”