Scene-stealing jewelry and accessories that seemed to long for star status graced runways during the spring Fashion Week shows. Geometry, fringes and tribalism were all statement-making trends bringing spring 2014 accessories into the limelight. Interestingly, in addition to the never-go-out-of-style classic gems and precious metals that form the foundation of the jewelry industry, organic flourishes like exotic wood, feathers and even fur are becoming mainstays on this year’s best-dressed wrists, necklines and fingers.

In this look at the emergent jewelry trends for 2014’s warmer months, we pay tribute to five of our favorite bold new leanings.

Geometry
Structured pieces that cover a lot of body real estate will be everywhere this year. Often created from a modest volume of material, these eye-catching bangles, necklaces and collars take advantage of clever, minimalist architecture to create maximum impact. One young designer who embraced this silhouette is French sensation Charlotte Dauphin de la Rochefoucauld, who created a graphic cuff for her eponymous design house. The piece capturing the most attention is a rose gold cuff deconstructed to a simple framework beset with diamonds. Imagine a corset or a hoop skirt with the fabric torn away and only the boning left to define the shape.

Roots Down
A celebration of tribalism will continue to make a big splash, leaving chunky beadwork, feathers and earthy settings all over the place. We also saw an increasing interest in the talismans of many cultures, like those in Africa, which were peeking out in the form of zodiac figures, animal totems and bejeweled insects. This collar by London’s Akong typifies the trend. 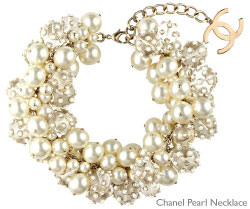 Organics
Overlapping slightly with the tribal trend, natural elements were found in many of this season’s highlight collections. Tory Burch turned to oversized flowers to create a bewitching crystal rose ring and pastel blooms also sprouted from rich reptile settings at Prada. Feathers found a home on Delfina Delettrez’s designs for Fendi and Chanel continued to turn heads with the giant pearl bubbles they’ve been working into a bold selection of chokers, rings and bracelets that blur the line between technology and the natural world.

Middle ground
Unusual materials and geometry weren’t the only revolutionary elements that characterized the work of this year’s most forward-thinking designers. Some were also rethinking where we put jewelry on our bodies. Alexander McQueen—whose chain stud cuff is pictured—Just Cavalli and Daks all floated larger-than-life loops meant to be worn halfway up the arm. Ralph Rucci and Versace produced midi rings, which sit above the knuckle. 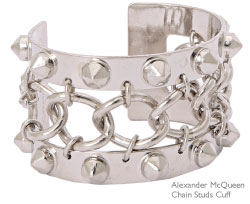 Weights and measures
While barely-there chains seemed to strain under the weight of dangerously heavy crystals and other baubles this season, another trend seemed to favor an overall heaviness. Balmain released an oversized cross design that drew rave reviews at the shows and Marni’s origami influenced pieces were as big as they were beautiful. At the vanguard of this look was Lanvin, which built on last season’s success: A collection of chunky gold chains that transform any look making them timeless as well as current.