At 3am the stillness of the early morning is broken by the metallic clinking of keys as they leave the baker’s pocket and meet the lock of the shop’s back door. Overhead the lights blink awake from a few hours rest, illuminating the hulking metal machines. Massive, silvery-gray giants weighing hundreds of pounds are ready to whip egg whites, mix cake batter or beat a roll dough into submission. But for all the mechanization and the heat of the oven, the heart of most bakeries is a workbench topped with a beefy slab of maple. That’s where the pastry chefs add the finishing touches. ¶ A generation ago most towns had one or two bakeries. If your parents were lucky, the place that made the great loaf of bread was equally deft at pastries for those visits to relatives—if not, they made two stops. Supermarkets have since lured people away with the promise of procuring a sheet cake and ciabatta rolls in the same cart as butter and eggs. But some bakeries endure in no small part because their communities refused to let them go.

When cousins Tanya Salagiannis and Helen Kyrillidis took a ride out from Queens to visit the Levittown Bake Shop in 2012, hoping to find a place where the two could start a new business, they knew they didn’t want to start from scratch. The beloved 50-year-old bakery was perfect and after buying it and changing the name to Sweet Surrender Bake House, they didn’t mess with what worked. “This place has been known for its jelly donuts and we kept it so there is pretty much jelly in every bite,” Salagiannis said. They fry about 600 donuts a week before plumping them with a raspberry jam that is cooked down on the stovetop. They then roll them in granular sugar—the way it’s always been done. 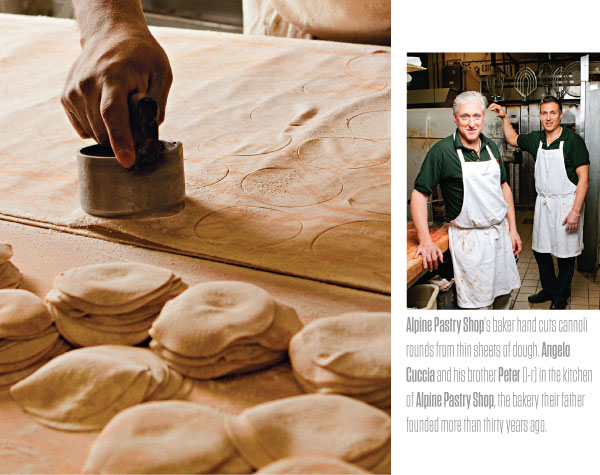 After culinary school Salagiannis worked under celebrity pasty chef Johnny Iuzzini at two of New York’s Jean George-owned restaurants. Kyrillidis was in insurance and handles the business behind the baking. To flex her chops Salagiannis pairs traditional desserts like donuts with more contemporary creations like the pretzel puff (a soft pretzel baked into a muffin shape and coated in cinnamon and sugar, crunchy salt or stuffed with bacon and cheddar). Food, like fashion, trends and the must-have treat of the moment is the cake pop, a scaled-down form of the ornate, baseball-sized cupcakes of the last few years. Salagiannis infuses them with familiar flavors like the chocolate, caramel, peanut butter and pretzel found inside a Take 5 candy bar.

But for each formally trained pastry chef there are those for whom picking up the piping bag (or whisk or bench scraper) is to continue the family business. Peter and Angelo Cuccia have run Alpine Pastry Shop the last few years in the same way their father Anthony has been doing things since he started the family trade by working at a well-known confectionary in Italy. The barometer of any Italian bakery has to be the cannoli, even though the simple, fried shell filled with sweetened cheese is often hampered by shortcuts. The Island is rife with thick, commercially-made cannoli shells and bakeries get away with them by increasing the amount of sugar in the filling until the cheese loses itself completely to monotony, a far cry from the original.

“We do them from scratch, the right way and the way it’s supposed to be done,” Peter said. “The shell should be crunchy and when it’s fresh it’s not hard or thick. With a fresh cannoli it’s more of a texture thing with creamy cheese and crispy shell.” And when a father has worked to make a name for himself in the business he’s handed to his sons, he wants to make sure they—the bakery and the family name—are looked after. “Years ago it was very important that they did everything right,” Peter said of his father’s pastry education. “That’s how we were taught too. He’s still involved a lot and while he’s semi retired there are times he’s here seven days a week.”

Ben Borgognone’s Italian-born pastry chef father started his youngest son in the business at the family shop in Brooklyn. Though Borgognone took to baking he wanted to try other styles beyond traditional Italian desserts. Having only worked for his dad, the then-22-year-old’s resume was short on experience. When he went knocking on the doors of the pastry chefs at the Pierre hotel, the Waldorf Astoria and The Plaza looking for a shot, he offered to work for free. “My dad was a pastry chef in Italy and he learned from his uncles,” Borgognone said. “When I went calling on these places I knew I had the talent.”

The Plaza took him up on his offer and fortunately for Borgognone they even paid him. In his two-year stint there he introduced Italian pastries—Italian-style cheesecake, Italian macarons, biscotti, the cassata cake—and picked up French and German-style confections from the other chefs. After spending his next two years at the East Village mainstay Veniero’s, the oldest Italian bakery in the US, Borgognone knew it was time to strike out on his own. In 1995 he bought Buttercooky Bakery, a struggling German bakery in Floral Park and infused the menu with tiramisu, French chocolate mousse cakes, Grand Marnier pastries and a traditional Italian pastry that morphed into something else in New York. 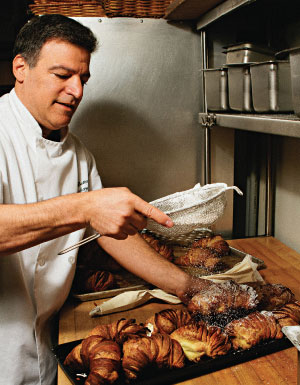 Sfogliatelle, an old Neapolitan dessert, is a dough rolled to create dozens of layers surrounding an orange-flavored ricotta that bakes off into a flaky, crispy, slightly sweet combination. The offshoot, known as the lobster tail, is made with the same dough but with a Bavarian or French pastry cream and remains one of Buttercooky’s best selling, and most labor intensive, desserts. Although many of Borgognone’s recipes go back 40 of the nearly 80 years his ancestors have been baking professionally, when he and his family are home “we’ll do a nice pound cake or maybe a Bundt cake.”

Flemming Hansen, a journeyman baker who first arrived in the US at age 19, has been making authentic Scandinavian treats in his Northport bakery since 1998. Even back then when he’d visit the area with his wife, taking their children to Cow Harbor Park across the street from the spot that eventually became their Copenhagen Bakery, it reminded Hansen of his hometown in Denmark. Kringle, a traditional Danish pastry is the bakery’s calling card and is celebrated on the sign over the door. Reminiscent of the German pretzel in shape, the kringle calls for imported Danish margarine. “We can use American butter but it’s not made for rolling,” Hansen said. “The margarine makes our danish more flakey than the American version, which is more cakey. The process of rolling it develops those flaky layers by laminating layer on layer, like a puff pastry.” That shell surrounds an almond and custard filling with raspberry and apricot, or a more traditional version with almond cream and raisins.

The pastries he made in Denmark are generally not as sweet as they are here, with the exception of marzipan, a blisteringly sweet almond confection. “When I grew up the bakeries didn’t add sugar to whipped cream,” he said. Still, another specialty his shop makes is the Paris-Brest dessert—which has plenty of sugar, by design. Made in honor of the 745-mile bike ride between Paris and Brest, a coastal town in Northwest France, the dessert is a caloric feast made from dough commonly used for éclairs and filled with a flavored cream to help sustain the athletes. The dish is easily identifiable because of its large, circular shape fashioned after a bicycle tire. 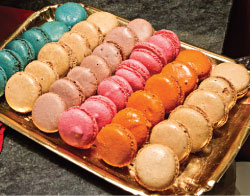 Jacqueline Ingoglia’s namesake patisserie has anchored the eastern part of Babylon Village’s Main Street for more than 15 years. An interest in cooking led the Lindenhurst native to the Culinary Institute of America in Hyde Park, NY, with the intention of focusing on savory, not sweet. But then a stint making pastries at New York City’s 21 Club during an internship changed that. She worked there after graduating then moved to the Essex House, where she worked under French pastry chef Andre Renard before plating desserts at the Garden City Hotel.

Her patisserie’s building was originally a clam and oyster bar, then a uniform shop. That rich history is something Ingoglia and fellow pastry chef Michele Klein wanted to convey to the customers—a place that was more of an experience than grab and go. The shop is a welcoming amalgam of warm wood floors, informal chairs bookending small café-style tables and walls of old clay brick.

The sweets here are a nod to her training in classic French pastry, the star of which might just be the macaron, an almost jewel-like cookie often boxed like a high-end chocolate. “We wanted to offer something you can’t get at any other bakery,” she said. Good almond flour for flavor and structure and whipped meringue that bakes up eggshell crisp is a good start. “We use flavored butter creams and if you want the good butter cream you have to make it from scratch with European butter. When they’re done well they have a lot of texture to them. They’re light and chewy and they have a lot of flavor.” 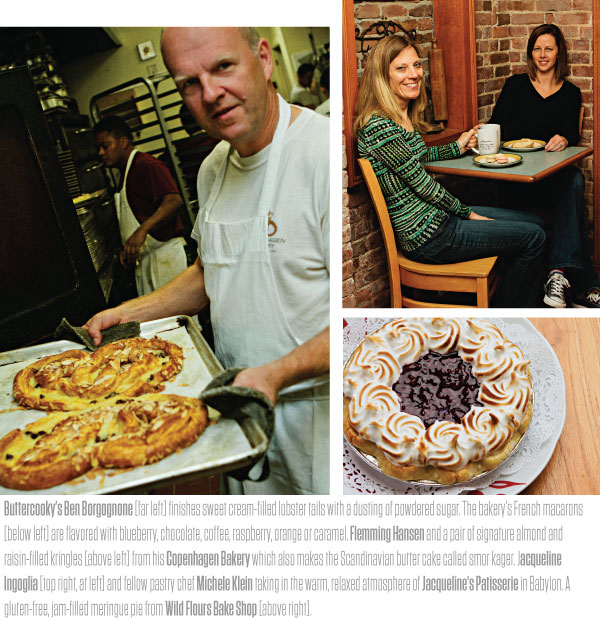 But it’s not just the cookies for which wheat flour, sugar and butter are the mirepoix. These base elements are the building blocks of both flavor and structure in most pastries. Now imagine baking food for people with digestive sensitivities to gluten and dairy. That’s the enormity of the challenge Wild Flours Bake Shop co-owner Carolyn Arcario took on. Her gluten and dairy-free, mostly organic bakery in Huntington uses the recipes she developed as a home baker after years of suffering from gluten intolerance. Arcario blends a range of alternative flours—from arrowroot, a starch used as a thickener, to super food quinoa—and sweetens them with unrefined, organic cane juice. The resulting My Favorite Cookies, a mix of chocolate and oatmeal raisin, cranberry-orange scones, blueberry muffins, cupcakes and pies look and taste like those in any other bake shop—a victory for anyone with gluten sensitivity.

When you unveil a cake or snip the helix of the blue and white string holding the lid shut on a white, square box it’s an affirmation that the celebration was worth visiting the baker. Some strive to make edible art, others are simply doing what they’ve always done because they really don’t know another way. From the baker you buy precious time, which if you had you’d bake something yourself. You borrow the skill it takes years to learn when you see those uniform, fragile whipped cream borders on a cake. From them you get the reason people “leave room for…”