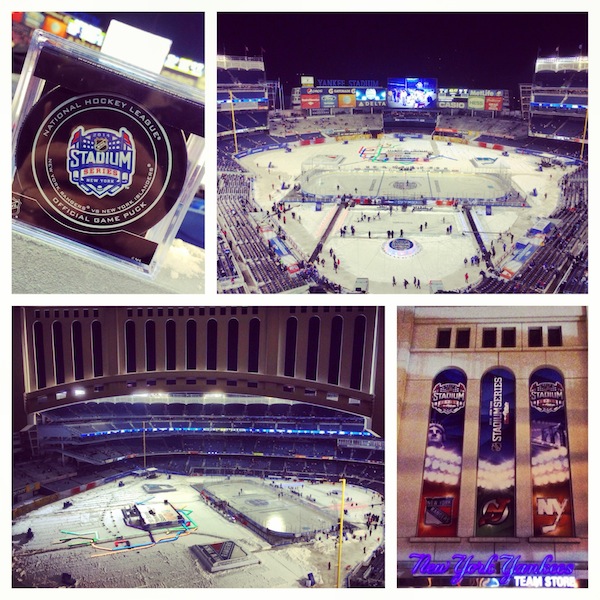 Put aside the weather, because it was cold. Forget the horrendous performance by CeeLo Green, because it was bad. And Islanders fan, for a second, don’t worry about the outcome and 2-1 loss to your rival Rangers.

Playing a hockey game at Yankee Stadium sounds great. It’s a fun idea that most, if not all, fans embraced. Rightfully so.

Watching the other Stadium Series game at Dodgers Stadium between Los Angeles and Anaheim on television was remarkable. The Blackhawks game at Soldier Field should be equally as exciting.

Even with the success of the Winter Classic and the Heritage Classic, there still seems to be room for more novelty by way of outdoor contests. The possibilities are endless; games at Busch Stadium, at Target Field in Minnesota, maybe even in Miami one day if the NHL wants to get real wild. It works.

Yankee Stadium isn’t known to be cavernous, but when your focal point is an ice rink, which is smaller then a baseball field, there are some viewing pleasures that are lost in translation.

Seats behind home plate that would normally cost thousands, were probably the worst in the house to watch the Isles and Rangers square off. It was a role reversal, where the best seats were, in fact, up top.

The sound quality for fan chants was weak also. Islanders’ fans are used to their cheers bouncing off the old walls of the Nassau Coliseum. Even when there is low attendance at a game that the Islanders are losing, the applause and cheers following a goal are seemingly loud. That wasn’t the case at the Stadium Series game.

Aside from Brock Nelson’s goal, you couldn’t hear a loud ovation. It was rare to hear a full “Let’s Go Islanders” chant, or even “Let’s Go Rangers” for that matter.

Also forget hearing the puck and sticks hitting the ice and boards. That sound was lost and drained out long before it reached the stands.

Two games in one week at Yankee Stadium seemed excessive. There’s another beautiful ballpark in the next borrow and Citi Field is craving a hockey game at this point. There was some mild news about Citi Field officials hoping to secure an NHL game in the future following the contest.

I’ll see your Citi Field game – because seriously it would be wonderful and make total sense – and raise you a Stadium Series or Winter Classic at MetLife Stadium also.