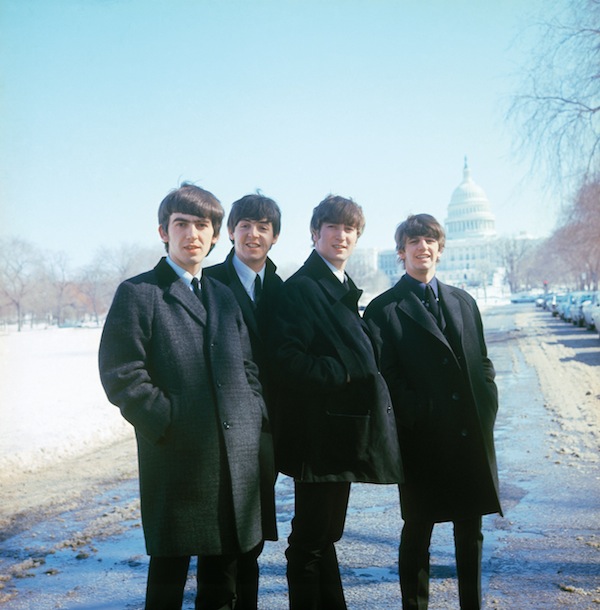 As a supplement to our Beatles Ed Sullivan 50th anniversary article in the February issue, this is the first in a series of articles that will appear throughout the month of February to continue our Beatles anniversary coverage.

The Fest for Beatles Fans celebrates its 40th anniversary this year. The East Coast Fest usually happens in the spring in New Jersey, but this year it will be held at the Grand Hyatt in Manhattan on February 7-9, to coincide with the Sullivan anniversary. Each year, the Fest features musical guests, a dance party, special exhibitions, interviews and much more. This year, along with such authors as Mark Lewisohn and Bruce Spizer and former Beatles secretary Freda Kelly (the subject of a new film), there will be many musical guests. Musical guests already booked are Donovan, Peter Asher, the Smithereens, Mark Hudson and Mark Rivera. Also of special musical interest is Billy J. Kramer, who lives part of the year on Long Island and who will be debuting material from his upcoming album I Won The Fight, his first album in 30 years. New York’s own Bambi Kino will also be playing at the Fest’s special “Cavern Club”. In addition, there will be a tribute to the late Sid Bernstein, also from New York; a photo exhibit featuring Bob Gruen, another New Yorker who figures prominently in Beatles history; and an appearance by the beloved New York radio legend Cousin Brucie.

One of the other musical headliners is the group Chad & Jeremy. The 60s British duo scored seven top-40 hits, including their biggest hit “A Summer Song”. Like Peter & Gordon, the group’s Everly Brothers-inspired harmonies and lush British pop production made them favorites at home and in America. The group’s unmistakable sound remains eerily the same. Jeremy Clyde, one half of the group, spoke to Pulse about the enduring influence of the Beatles, the British Invasion sound and much more.

LIP: Are you surprised that there is still so much interest in the music of the Beatles?

JC: I’m not at all surprised that the music of the Beatles has lasted. In fact I can remember that we all thought so at the time. There was that astonishing moment when you rushed home with their newest album and then played it again & again, hearing more amazing things each time.

LIP: How much of a direct influence were the Beatles on Chad & Jeremy?

JC: We were all in awe of their abilities. Perhaps C&J were less influenced than some others, coming from a folk[ish] background. That said, I wrote a couple of songs in the mid-sixties that have a definite Beatley feel. For those that are interested, check out “What Do You Want With Me.”

JC: I’m not quite certain what a British Invasion Sound is exactly. And I think that a younger generation hears old stuff without the cultural baggage that I associate with records of a certain era. For example, what is now termed Lounge Music I hear as over arranged and sugary, but is now viewed as the height of sophistication by the younger crowd. That said, the two guitars bass and drums band will always be with us. And that is pure 60s.

LIP: Chad & Jeremy were not from Liverpool, but was there any kinship felt with the Liverpool groups?

JC: Musicians are musicians wherever they come from. I can remember hanging with the Hollies, from Manchester I think, also in the north of England. But Liverpool has its own sense of self, its own “Scouser” sense of identity that is denied the rest of us. I have friends from there and it never leaves them.

LIP: What were Chad & Jeremy’s first experiences meeting the Beatles?

JC: I first met Paul through my pal Peter Asher. We used to hang out in the attic room of their tall house in, I think, Wimpole Street when Paul was with Jane [Asher]. Later, Chad met John a couple of times in LA. But I’ll let him tell the story when we do the show.

LIP: Did the Beatles ever offer Chad & Jeremy any particular songs?

JC: No. Instead, a certain Peter Asher got in there, just because he had a cute sister. Much grinding of teeth.

JC: I don’t remember any particular conversations. They were just there…giants, like Buddy Holly, like Elvis. And they all lived in this wonderful land of plenty called America, somewhere we’d never get to. Funny how it worked out.

LIP: Given that Peter & Gordon were also obviously influenced by the Everly Brothers and Peter Asher became a record producer, was there ever any talk of him producing Chad & Jeremy?

JC: It never came up, possibly because Chad and I were breaking up at the time Peter was getting into producing. I used to drop into Apple to see what he was up to. But I was doing a play in London’s West End at the time. Later, I went over to Peter’s place to hear a new discovery of his, one James Taylor. An evening to remember.

JC: No, we never actually performed together, which is strange, looking back. I used to hang out at the Pickwick Club where they performed and I remember listening to them rehearsing. When we were signed by John Barry we left our regular gig at Tina’s Bar and they wanted a replacement. And of course we suggested Peter & Gordon. We never thought that within a year we would both be in the charts. And being confused with one another, for that matter.

LIP: With the new Chad & Jeremy recordings from the past few years it would seem like a complete re-birth. What are your future plans?

JC: Amazingly, we’re doing three tours this year, so that doesn’t look like retirement. And we can still handle the high notes. So keep on keeping on, I guess. As long as people still want to hear us. Fifty years, eh? Surely some mistake…..

Here are some other upcoming Beatles 50th anniversary events:

On February 8, 2014, Long Island Beatles tribute band Mostly Moptop will present The Fab ’64 Show, at the Dix Hills Performing Arts Center at Five Towns College. The concert will feature music from Meet The Beatles, A Hard Day’s Night and Beatles for Sale. 7:30pm. Tickets are $35, $30 and $25.

It Was 50 Years Ago Today at the Bay Street Theatre in Sag Harbor will also celebrate the 50th anniversary of the Beatles Ed Sullivan appearance on February 7-9. On February 7th at 8pm will be Legends: The Beatles with archivist and filmmaker Joe Lauro, presenting an evening of the group on film. Tickets are $15 for general seating. On Saturday, February 8th at 8pm check out Celebrating the Beatles with Inda Eaton, Gene Casey, Corky Laing, Mama Lee & Rose, Joe Delia, Dawnette Darden, Joe Lauro, Caroline Doctorow, Jim Turner, and Jewlee. Tickets are $25 in advance and $35 the day of the show. Both are general seating and include a glass of house wine for adults. The evening is hosted by Cynthia Daniels (host of Monk Music Radio). On Sunday, February 9th at 7pm will be The Beatles on Ed Sullivan, featuring the complete February 9th broadcast and rare film of The Beatles’ first visit. Tickets are $5 for general seating. For all three nights, Bay Street is offering a Fab 4 Fan Pass for $40.

Other Long island-based Beatles events include the Beatles tribute band the Fab Four at the Paramount in Huntington on February 8th. At the NYCB Theater in Westbury on February 8th and 9th will be All You Need Is Love: A Beatles Tribute Concert. On February 23rd, the multi-media tribute show Rain will be at the Tilles Center in Brookville.