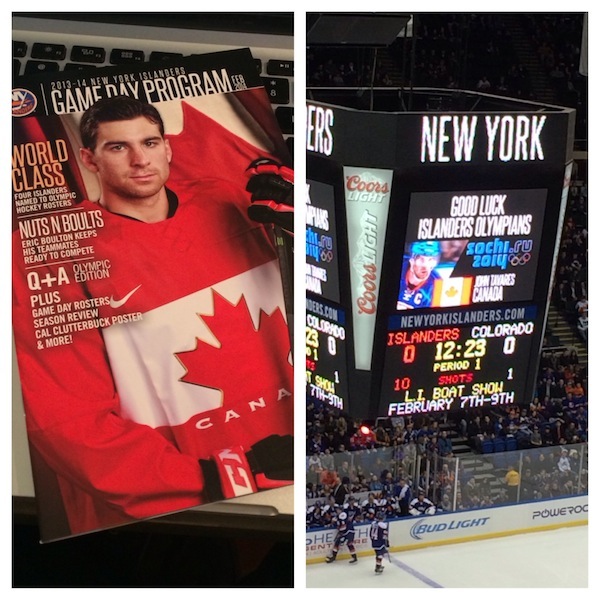 As the 2014 Winter Olympics kick off in Sochi you’ll have to wait a few days until hockey begins. This year Islanders fans can root for a number of countries besides their beloved Team USA.

“It’s a huge honor and was a goal and dream of mine as a kid,” said Tavares in a story in this month’s Islanders game day program. “Watching four years ago I wanted to give myself the opportunity to play for my country and win a gold medal. There are a lot of emotions and to receive the call is pretty special. It’s so much all at once, you just try to grasp it all.”

The Islanders video and public address staff paid tribute to the team’s Olympians as well as the Olympians competing on the Colorado Avalanche during the team’s final home game before the Olympic break on Saturday.

“It’s an honor to play for your country, especially on a stage like this,” said Vanek. “For us, it’s fun to be there. We have a tough task ahead of us. It comes down to goaltending and we’ll have to play smart, but we have some guys in the lineup that can make plays. Are we going to be huge underdogs?

We will be, but we have to play smart.”

Lubomir Vishnovsky was selected to his fifth Olympic games for Team Slovakia, but was not cleared to participate after Islanders doctors evaluated him following the Islanders’ final game before the Olympic break Saturday against Colorado, according to a release from the team. He missed 45 of 60 regular season games so far this season due to a concussion.

“I’m honored to have been selected to represent Slovakia at the Sochi Games,” Visnovsky said in a release. “I’m disappointed that I will not have this opportunity to compete for my country, but respect the decision the Islanders have made. I’m excited to watch Team Slovakia compete throughout the next two weeks and wish them all the best.”

The men’s Olympic hockey schedule kicks off Wednesday in Sochi. Canada opens up against Norway on Thursday, while Austria plays Finland the same day.