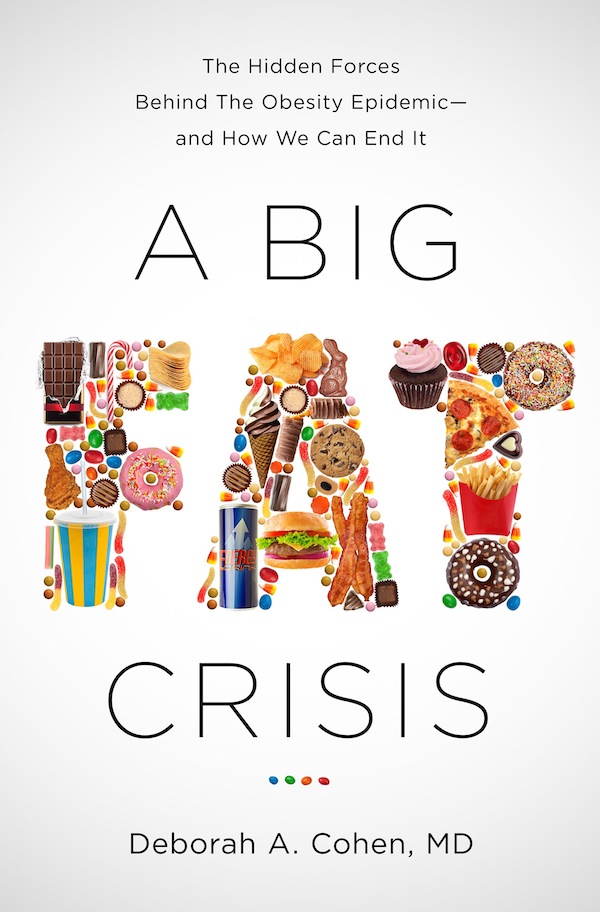 You feel as though you might have to quit your job.

Yeah, you’re that desperate to get away from the treats that somebody’s been leaving in the break room. Nice gesture, but you’re totally incapable of resisting them and each bite ruins your diet.

It’s a point of shame that you have no willpower, but there may be more to your weight problem than lack of the word “no.” Find out by reading the new book “A Big Fat Crisis” by Deborah A. Cohen, MD, and cut yourself some slack.

It seems as though you can’t escape it: everywhere you look, you’re reminded to eat healthier, get active, and lose weight. But you also can’t escape the things that taste good but are bad for you, and sticking to Dietary Guidelines “is neither easy nor fun.” In fact, most of us don’t eat right and just five percent of us get the recommended amount of exercise.

But to say that we’re weak-willed is misleading, says Cohen. Most overweight people “appear to have plenty of self-control in most other areas of their lives.” They get to work on time, volunteer, pay bills, drive safely, and raise families. So why can’t they control what they eat?

The reason, Cohen says, is twofold: we’re hard-wired to eat, and we’re exploited by our “food environment.” The good news is that the latter – “point of purchase and point of consumption” – are changeable. First, though, we must understand “that an individual’s ability to resist overeating is limited when excess food is constantly available.” In other words, for myriad reasons, the more we try to control our appetites, the less we can avoid that extra donut or large O-rings.

The fixes are many: pay attention to what you eat; just seven extra calories a day will result in surprisingly big weight gain. Familiarize yourself with caloric content. Become aware of how marketing promotes overeating. And support government regulations on grocery stores and restaurants; after all, laws keep us safe from cholera and typhoid. They should be able to keep us safe from obesity, too.

So you say you need to lose ten pounds – but they’re kicking your (well-padded) butt? It might not be your fault, and “A Big Fat Crisis” tells you why but not without an extra helping of controversy.

On one side of the table, this book should be a big comfort to anyone who’s shamed by weight and temptation. Author Deborah A. Cohen, MD takes the onus off dieters by explaining that it may be genuinely true that they can’t help themselves. Cohen doesn’t let them totally off the hook, though; she still scolds, but not terribly harshly.

The controversy, however, lies in Cohen’s strongly-opinionated solutions. Specifically, restaurant owners, grocers, vendors, and retailers won’t like ‘em. Not one crumb.

Obviously, this isn’t your usual diet-and-exercise book. There are conversation-starters on every page here, and lots to think about. But if you’re concerned about obesity, eating right, and your family’s weight, “A Big Fat Crisis” might give you the skinny.