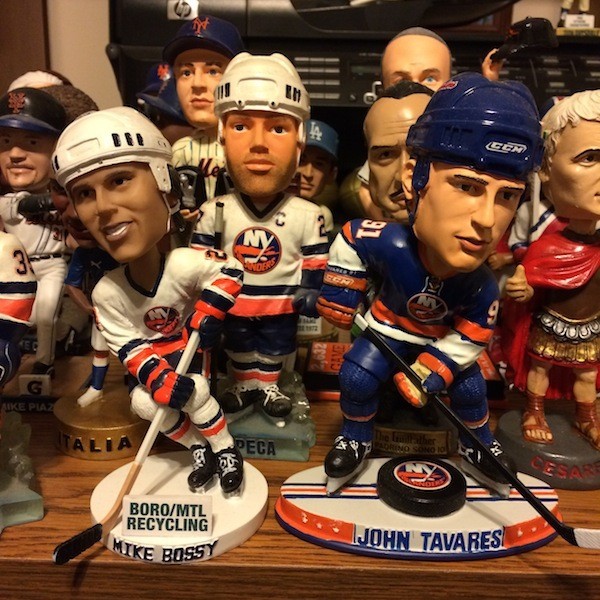 Many teams, especially in Major League Baseball, understand that a good bobblehead giveaway provides historical context, tells a story and sometimes is good enough to make news. The Dodgers, for example, gave away a Rick Monday American Flag Cubs bobblehead last year when Chicago came to town to honor their former player who happened to make history at Dodger Stadium while playing for the Cubs decades ago. He also played for the Dodgers, so there was a dual connection. This year the Twins are giving away a Lou Gehrig bobblehead on Fourth of July. Why? Because it’s the 75th Anniversary of Gehrig’s famous speech, which happened when the Yankees played the Washington Senators, who eventually became the Twins. It makes sense. It always does.

In the early 2000s, the New York Islanders were very progressive with bobblehead giveaways. They gave out dozens, from legends like Mike Bossy and Bobby Nystrom, to stars of the time like Kenny Jonsson and Alexei Yashin.

Unfortunately, the designs were very basic compared to the stadium giveaways of today. They’re all stubby and round, whereas today’s have actual individualized detail that will catch your eye and force you to appreciate it’s artistic value. I just picked up a Peter Laviolette bobble on eBay for $3.99 and it got me thinking. If the Islanders started giving away bobbleheads again, which five should they do immediately?

1. Bobby Nystrom game winning goal: May 24, 1980. 7:11 of overtime. You know all about it. Now let’s get a bobblehead where Nystrom either has his hands raised in celebration, or is fully jumping with his legs in the air as you see in many historic photographs of the moment.

2. Legends set: The Dodgers have been doing this a lot and it works. Put multiple players on one platform. For the Islanders, you’d expect a legendary lineup of Bossy, Nystrom, Billy Smith, Clark Gillies, Denis Potvin and Bryan Trottier.

3. Denis Potvin Stanley Cup: You could do any number of Islanders hoisting the Stanley Cup and the organization should consider it, but if you had to choose one player to hold Lord Stanley it hast to be Potvin. His legacy will forever shine bright as one of only a handful of players in NHL history to captain four straight Stanley Cup winners.

4. Ken Morrow 1980 dual bobble: I’d suggest releasing a bobblehead with Morrow wearing his 1980 Olympic Gold Medal and uniform on one side and him hoisting the Stanley Cup on the other.

5. Tavares Team Canada: I’ll give you one modern idea to chew on. This is very doable and you may even see this one day. A John Tavares bobblehead in Team Canada garb would be a hot item with international appeal.