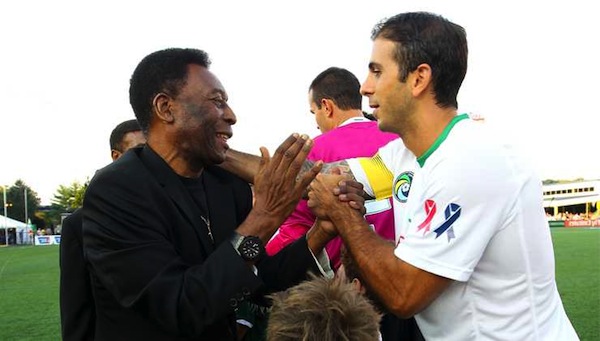 Soccer icon Pele will receive an honorary degree from Hofstra University in April, according to a release from the school and the New York Cosmos, who play their games on campus at Shuart Stadium.

Pele is being recognized for his humanitarian work and contributions to the sport he dubbed as “the beautiful game.”

He starred on the Cosmos during the club’s heyday 40 years ago and is the club’s honorary president today.

His recognition will coincide with a conference being held at Hofstra called “Soccer as the Beautiful Game: Football’s Artistry, Identity & Politics.” Hundreds of journalists, scholars and soccer folk from around the world will be in Hempstead, N.Y. from April 10-13 to celebrate the game and Pele.

According to a release, the conference is being presented in collaboration with more than a dozen academic and sports institutions, including the Cosmos, the Consulates General of South Africa and Brazil in New York and the United States Soccer Federation, which last year celebrated its 100th anniversary.

“Pelé transformed and transcended the game of soccer,” said Hofstra President Student Rabinowitz, in a statement “While the world first came to know him for extraordinary athletic feats, his soccer career was, in many respects, simply a prelude to an extraordinary life of service as a philanthropist and advocate. He understands the power and responsibility his soccer legacy carries, and has used it to improve the lives of others.”