It’s Sunday morning and church is already in session for Peter King. His cathedral at this early hour: Bellmore Kickboxing MMA, a gym in a non-descript storefront along Merrick Road. King circles the ring, leading with his right hand as sweat drips to the mat. Sparring with his trainer, a man with kettle bells for biceps, King pushes his 69-year-old body from one padded corner to the next. King, an 11-term Republican congressman from Seaford, endures a physical flurry and verbal beating from longtime trainer Chris Cardona. “He’s 87. He looks great!” Cardona jokes as he fends off a right jab from King. “Can you shoot tight so you don’t get his walker?” Cardona asks the Long Island Pulse photographer taking aim from inside the ropes.

The hell-raising politician with the permanent scowl has no YouTube-worthy retort. King—who, for the record, doesn’t use a walker—can only laugh at the salvos fired by his friend. But the exchange perfectly sums up New York’s most outspoken politician: Peter King may not always win, but he never backs down from a brawl.

“Teddy Roosevelt was willing to stand up and fight for what he believed in,” King told Pulse. “He realized the importance of fighting in the arena, not just getting yourself on stage. You can either be on stage or in the arena. I’d much rather be in the arena.” An apt quote for the congressman who is unflinching when it comes to tackling national defense or Sandy aid, unafraid of taking down fellow Republicans or responding to rival pundits along the way. He is the second-most televised member of the House of Representatives—15 appearances on Sunday morning news shows in 2013—for exactly that reason.

The insults and barbs will only grow louder, more heated and deeply personal as he weighs a 2016 presidential run. That’s right, King hopes to be a worthy successor to Teddy Roosevelt, Long Island’s lone Commander in Chief. To do it he’ll have to redefine what it means to be a Republican in a fractious party.

“There are problems in our party. There are people who are very, very conservative,” Nassau Republican chairman Joseph Mondello said. “I’ve always looked at Peter, although he has strong feelings on things, as basically a moderate Republican. I’m hopeful that’s not going to hurt him with the rest of the country. I’m hopeful that a lot of the Republicans who are very much to the right are going to see the light.”

King has been a critic of American Muslim leaders who he believes have not cooperated enough with police and federal agencies in the wake of Islamic extremism since September 11. Then there’s his tough stance on illegal immigration, voting to build a fence along the Mexican border.

Yet after a decade of stern talk on terror and influencing America’s foreign policy, King’s passion and ire have turned inward toward his own party. He recently took aim at Sen. Rand Paul (R-KY)—a Tea Party darling and likely presidential hopeful in 2016—for his “scaremongering, isolationism” stance against NSA surveillance. And King went head-to-head with Speaker of the House John Boehner (R-OH) after Congress was slow to aid victims of Superstorm Sandy. “We’re at a defining moment. Right now there is a fight for the soul of the Republican Party,” said King, who is lined up against Paul and fiscal conservative Sen. Ted Cruz (R-TX), co-authors of the 16 day government shutdown in October.

Sandy flooded much of King’s Second District, which was redrawn in 2012 and now includes much of Suffolk; it stretches from Bayport to Levittown. An impassioned King took to the House floor and scolded fellow members for holding up aid. Three months after Sandy struck, and with a lot of arm wrestling by powerful New York and New Jersey lawmakers, Congress finally approved $50 billion in emergency relief.

“We were getting so much resistance in Congress,” said King, furious that his fellow House members used the natural disaster to politic against more government spending. “It was so frustrating: The thought of going home on weekends to Massapequa and Seaford and seeing all these homeless people and not being able to tell them that help was coming.” 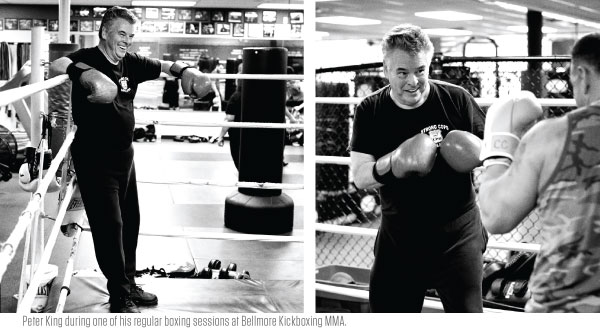 Traveling with the congressman, even on a coffee run, it’s easy to see his connection to the community. King, who is in Washington four days a week during voting sessions, is a famous face wherever he goes and is quick to strike up a conversation. After he’s had enough of the punching bag and chatting about local fighters on the rise, we stop off at a 7-Eleven in Wantagh. There the congressman grabs a bagel, coffee and a Sunday New York Times, talking up employees along the way. Wearing a Suffolk County Police Department t-shirt, King dutifully stops to shake hands with two police officers getting their own caffeine fix.

“He’s got his feet planted firmly on the ground,” said Mondello, who has known King since they were young attorneys eager to break into politics. “He doesn’t look at himself as a big shot because he’s a congressman and because he’s done well in politics and government. He remembered his roots, stayed with the people of his community and is still very interested in local politics. That’s Peter. That’s who he is, a regular guy.”

Political Upstart
For all the bluster and cutting sound bites, King is genial and quick to crack a smile. He’s authored three novels (two feature the exploits of a fearless congressman), is an unabashed Notre Dame football fan, lived in the same middle-class house for 43 years and won reelection by 59 percent of the vote in 2012.

The son of a homemaker and a New York police lieutenant who had a passion for boxing, King grew up in an Irish neighborhood in Queens, played stickball and dreamed of being a Brooklyn Dodger. But when the sports dreams didn’t pan out, he applied himself at law. After graduating with a legal degree from the University of Notre Dame, where he met his wife of 46 years, he landed a job in the Nassau County District Attorney’s office. With wife Rosemary at his side, he joined the Nassau County Republican Club in 1968, was elected a Town of Hempstead councilman in 1977 and served three terms as Nassau Comptroller, raising two children along the way.

After a failed bid to become state Comptroller, King ran for Congress in 1992. He was outspent four-to-one but saved all of his $400,000 war chest for the last two weeks of the campaign. King’s ads over the final 10 days blasted his opponent, former Lehman Brothers Managing Director Steve Orlins, for having a home in Manhattan and not voting regularly in past elections, all while using a Robin Leach-style voiceover. “On election night we didn’t know until almost midnight that we had won,” said King, who prevailed by 7,800 votes and a narrow 3-point margin. Going toe-to-toe with a much more powerful foe was just the beginning of what’s become a King trademark.

After September 11, 2001, King’s influence expanded—he built a national presence on the smoldering ruins of the World Trade Center and Pentagon. No one has been as hawkish as King in post-September 11 America, from the use of drone strikes to the defense of Middle East ally Israel. And as a member of the House committees on Financial Services, Homeland Security and the House Permanent Select Committee on Intelligence, few men have wielded more influence both in terms of domestic security and foreign policy.

His actions have drawn unrelenting howls too, from his support of the Irish Republican Army (which the British government once labeled a terrorist group) dating in the 1970s to a series of hearings examining the radicalization of American Muslims as Homeland Security chairman. While some have characterized it as modern-day McCarthyism, King told Pulse that leaders in the Muslim community have not done enough to alert authorities of potential troublemakers. 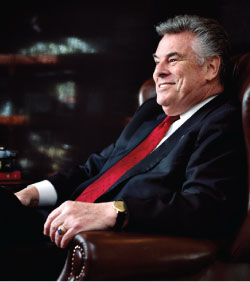 “All communities, they cover their own,” King said. “But when it comes to attacking your own country it’s a different story. It’s somehow different if you know the local guy is a bookie. But if a guy is interested in carrying out attacks and killing Americans I’d be disappointed in anyone who didn’t turn him in.”

Imam Muhammad Abdul Jabbar, of the 5,000-member Muslim Center of Long Island in Bay Shore, said King needs to tone down the rhetoric for him to endorse King’s presidential bid. He cautioned that King’s message has stirred backlash against patriotic Americans because of their religion.

“If he has the same mentality against Muslims, that would really not be good. It won’t be beneficial to Muslims if he does not change,” Imam Jabbar said. “His statements are broadcast and printed in the media and creates a bad feeling about Muslims. “Muslims are stigmatized, our children in school or women going to the market. Sometimes there is some foolish thing that happens like [the Marathon bombing] in Boston and then we become the target of hatred.”

King’s tie to the IRA is an apparent contradiction for a man whose anti-terror message is central to his current political clout. Yet the politician is unapologetic, citing his involvement in the 1998 peace accord as proof he was on the right side of history.

“The situation in Ireland was unique in that you had political, paramilitary and terrorists groups on all sides of the issue,” King said. “You had many elements within British security services involved in terror tactics as well… I said those supporting the IRA were a legitimate force and had to be part of any peace process. Subsequent to that Bill Clinton and Tony Blair have agreed with me and I have gotten any number of statements from both Clinton and Blair saying I worked closely with them to bring about [the 1998] peace agreement.”

Citizen King
Is King divisive or a unifier? He may be a lightning rod on the national stage and beyond, but within his district he’s considered an everyman who is always spinning from one task to the next, solving more problems than he creates. And that’s exactly what he must convince the rest of the country he would do as president. The National Republican Committee lists no fewer than 32 presidential hopefuls in its online straw poll. King’s got a puncher’s chance at the presidency, but only if he can win over party moderates. To that end, the New York politician has already made five trips to New Hampshire, the first primary state in the race for the White House.

If Citizen King is a candidate at all, he is still the nominee for a robust national defense, a Republican totem. But his talking points include long-term entitlement reform, health care, government waste, small business and jobs creation. “I represent middle income values and views both economically and socially,” he said.

King knows how to lace up a pair of gloves. He used the word “fight” no fewer than 12 times during multiple conversations about his humble political beginnings, presidential aspirations and the state of the Republican Party. “I’m outspoken, but I don’t think you’ll ever hear anyone say I bullied them or screamed at them,” King said at a time when New Jersey Gov. Chris Christie was under fire for doing exactly that. “Whatever I do, I do in public. To me it’s more like a fight, like two boxers who duke it out and when it’s over they shake hands and go home. I just think if you believe in something you should fight for it.”