Hot Off the Press: Rauschenberg, Johns and Emerging Artists

In 1957, Tatyana Grosman quietly founded the Universal Limited Art Editions (ULAE) publishing company in a West Islip cottage, but the printmaking firm soon made loud reverberations in the art world. After MoMa gave her prints wide exposure, artists like Jasper Johns, Helen Frankenthaler and Robert Rauschenberg soon followed. They continued into the 21st century, with the help of the ULAE, and a number of those works will be on display at the Art League of Long Island through March. Significantly, one is part of the last series Rauschenberg created before his death in 2008. With the assistance of current ULAE director Bill Goldston, “Lotus I (The Lotus Series),” edition of 50, and its companion prints were commissioned by a Beijing gallery. They are a computer- and ink-manipulated collage of photos Rauschenberg took during a trip to China, that were embossed by a photogravure lotus as a symbol of purity.

Hot Off the Press: Rauschenberg, Johns, and Emerging Artists is showing until March 30 at the Jeanie Tengelsen Gallery, Art League of Long Island,
Dix Hills. (631) 462-5400, artleagueli.net 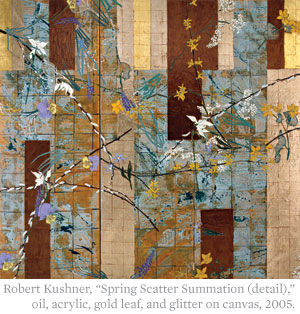 Floral motifs will be bursting from The Nassau County Museum of Art just in time for spring. The theme is a play on the 18th century French tradition of fête champêtre or garden party, but with a modern twist. The exhibit is a multi-media progression through the seasons in flowers and gardens. Robert Kushner, a central figure in the 70s pattern and decoration movement kicks it off with an immense 47-foot floral study on gold leaf across multiple panels. More in line with orthodox depictions of flowers, but no less striking are Georgia O’ Keeffe’s impressionistic oil “Coxcomb” and Chagall’s “Le Repos,” a joyful Fauvist bouquet presentation. In the third dimension, intricate 19th century costume design in dress and beaded purses see the light of day and Hunt Slonem acknowledges the fauna as well as the flora in colorful, large-scale metal sculptures of plants and animals.

Garden Party will be showing from March 8-July 6 at The Nassau County Museum of Art in Roslyn Harbor.
(516) 484-9337, nassaumuseum.org