After several failed suicide attempts, Lucy Winer of Great Neck was committed to Kings Park State Hospital in 1967. She was 17.

Kings Park, an 870-acre compound that operated from 1885 to 1996, was once the second-largest state-run hospital in New York, housing more than 9,300 patients at one time. In Kings Park: Stories from an American Mental Institution, Winer, now a filmmaker, revisits the abandoned hospital that once shackled her—physically and spiritually. In making the movie, she hoped to exorcise her past in an attempt to save her future. This exploration, aided by earnest discussions with former patients and staff, reveals the nightmarish history of Kings Park and delves into the current inadequacy of our national mental healthcare system.

Long Island Pulse: What do you remember most from your time at Kings Park?
Lucy Winer: The terror I felt from the moment I arrived. As patients we were helpless. In the three months of my first stay—I went there twice—I met with a psychiatrist only once and I never spoke with a nurse. My very first day, another patient warned me, “Don’t cry, they’ll hurt you.” It was understood by all of us that we could be restrained, overmedicated, beaten, put in isolation or befall an unfortunate accident… and who would know? Who would believe us? 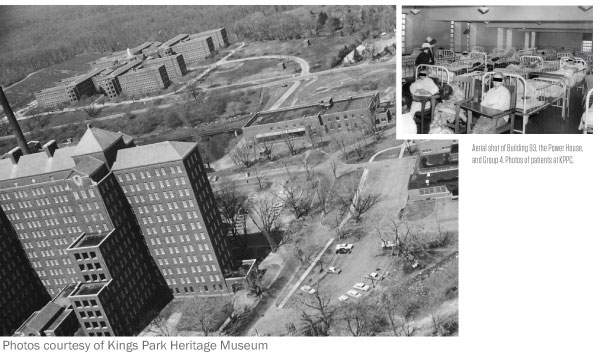 Pulse: So you were completely isolated from the outside world?
LW: For most of their history, state hospitals like Kings Park were self-sufficient and often sequestered. They had their own farms and livestock and they made everything from mattresses and shoes to furniture. The state hospital was like the local factory. When Kings Park closed in 1996, the initial idea was wonderful—funds saved by closing the hospital would be used so people could receive services and treatment in the community. But that never happened at the intended level. Instead, in a rush to empty the hospital, people were discharged well before they were ready, with no place to go and little knowledge of the outside world. Men and women who had spent decades in the hospital were driven to the city and left with a [subway] token, a prescription and the address of the nearest welfare office. What’s important to grasp is that when you tell the story of one state hospital, you’re telling the story of all of them. In that sense, the history of Kings Park is the history of public mental healthcare in this country. But it’s a vanishing history, because these hospitals are closing quickly.

Pulse: Why did you feel compelled to return?
LW: It took well over a year to get permission to get on the grounds. I think we finally succeeded because we just wouldn’t take no for an answer. I wanted to rescue myself. It had been over 30 years and I had come to believe that some small part of my spirit was still there—trapped in the state hospital. The only way I could get her back was to literally go back to my old ward and free her. My motivation was very personal.

Pulse: Did you succeed?
LW: Yes and no. What started as a rescue turned into an exorcism. What I discovered in all the years of making this film—it took over 11 years—was that it wasn’t so much that a part of me remained on the floor of Ward 210, but rather that a part of the institution lived on in me. Without my knowing it, I had internalized the harsh treatment and negative judgments of the hospital and I needed to let it all go. Making this film and sharing with audiences around the country has been a huge help. When I started this venture, Kings Park loomed over me. My life was lived under its shadow. All these years later, it’s almost hard for me to believe I was ever there.

Pulse: It was catharsis.
LW: Yes. It’s been huge. But while this film started as a personal journey, it became much more than that … I realized that I needed to reach beyond the limits of my own story to the story of the hospital itself. What was it like for other patients? How was it to work there? To have someone you knew there? For eight years I traveled to meet with people who had firsthand experience of Kings Park—other patients, former staff and family members. Their experiences were very different, and sometimes—especially when I spoke with people who worked at the hospital—I hated what I heard. But it also helped me to walk in someone else’s shoes. Although the film is very critical of the state hospital, we worked hard to present a balanced picture that honored different, even contradictory, experiences and memories. That’s a big part of the film’s power. 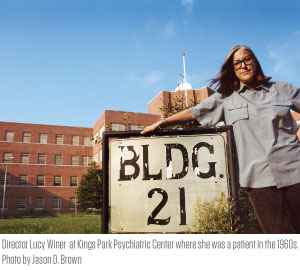 Pulse: What would have been the typical experience of a person institutionalized at Kings Park?
LW: Back then the system was set up to keep people. Left and forgotten was the norm. Very few people ever received visitors and families didn’t necessarily want their relatives back. Mental illness was a dirty secret. If you went in with a problem that was short-term, you could easily spend your entire life, or much of it, in the hospital. That’s how it was.

Recently a woman contacted me who had just learned about our film. She was about to turn 90. She learned through a genealogy search that her mother had been a patient at Kings Park for over 50 years. As a child growing up, she was told her mother was dead. It was not until adulthood that she learned her mother was actually alive and living there. To make matters worse, she was warned she must never tell anyone, because if she did, she would jeopardize her father’s ability to make a living. That’s how shameful mental illness was, and still is for some people.

Pulse: Have we progressed from that period?
LW: I think we’ve definitely progressed. When I was a patient in the 1960s, mental illness was never discussed. If you had a psychiatric problem, you didn’t admit it. That’s not the case today. People speak more openly about their issues—though not everyone, of course. It’s still a huge risk professionally to admit to having a mental illness. But I think we’ve become more enlightened and with that comes the frustration of not being further along in terms of treatment, resources and attitudes. When these hospitals were closed, the understanding was that the money saved would go to community mental healthcare. That happened, but only to a small extent. So it’s no surprise that we are now living through a crisis in mental healthcare.

Pulse: What do you think is needed?
LW: I think we need to continue to educate ourselves about mental illness. And to challenge the negative attitudes that still prevail about psychiatric disability. We need to speak openly and tell our stories. And we need to advocate for change. I think as humans we endure many different types of distress and extreme experiences. We share this. Yet we continue to act as if this is something that happens only to “them.”

Kings Park: Stories from an American Mental Institution plays at Cinema Arts Centre on March 23. Lucy Winer and members of the cast and crew will appear for a reception and Q&A at 1 pm, $15. http://www.cinemaartscentre.org. More information on the film can be found at kingsparkmovie.com