Long Beach big wave surfer Will Skudin is coming off the most impactful year of his life. It might not have been the most fun, nor the easiest, but it was certainly the most eventful 365 day period in Will’s 28. Skudin began 2013 in the throes of Hurricane Sandy, helping dig his hometown out of the mud; the year’s end brought about a nod from Eastern Surf Magazine as the 2013 Surfer of the Year.

At least from an East Coast perspective, the Skudins are surfing royalty. Dave and Beth Skudin, mom and dad, started surfing Gilgo Beach in the 1960s. Their four sons—Will, Cliff, Woody and David—now help operate the Skudin Surf school in Long Beach.

Will and his brother Cliff, two blonde boys who practically grew up in the barrel of a wave, are both members of the international Big Wave World Tour. (Will finished 16th last year.) Cliff holds a masters degree in physical education and he and Will collaborated to form Surf For All—a non-profit that helps students with disabilities learn to surf. But while the Skudin clan works to bring the wonders of the water to life for a growing collection of converts, it was Will who generated the most buzz this year for his performance on the board.

When Pulse spoke to Skudin he was recuperating in Hawaii after a surf swing that included Ireland, Mexico and California. We asked him about his ESM win— an award which went to 11-time world champ Kelly Slater in 2012—as well as epic wipeouts, his best waves and everything in between. 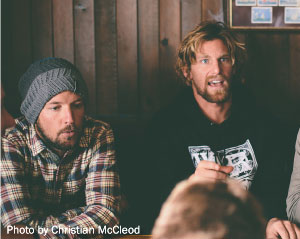 Long Island Pulse: So…eventful year, huh?
Will Skudin: Definitely. There have been years when I caught bigger or better waves, but this has been a bigger year on an international scale. A lot of times when you catch big waves it’s hard to document. You’re two miles out to sea or it’s raining. A lot of waves that we catch aren’t filmed. Sometimes you get unlucky and your best waves aren’t captured. But this year was the biggest year for me in terms of getting recognition.

Pulse: Is it frustrating when your best waves aren’t appreciated?
WS: No. You start doing this for the love of it, not to get famous. You wouldn’t put your life on the line any other way. Also, when you’re riding, you don’t know how big the wave is or how big the moment is. You’re just going for it. I’m friends with the boxer “Irish” Seanie Monaghan [also of Long Beach] and he says that when he’s in the moment, he almost blacks out. It’s true. In those big moments you’re just running off adrenaline.

Pulse: You encounter surfers from the great surf areas—Hawaii, California, Australia—is there a stigma around being from New York?
WS: That’s another way this was a big year for me. People have started to be open to surfers from New York. I’ve been doing this almost a decade now. In the beginning it was like, “Whoa, what? You’re from where? What are you doing here?” But once you surf with everybody, you realize that basically we’re all just products of beach towns. No matter where you’re from, San Diego, Florida, North Carolina, if you’re from a beach community, you share a language. The ocean captures a culture that’s unlike anything else.

Pulse: It must be strange having such a great professional year after the way it started. Your family was hit hard by the hurricane, right?
WS: As awesome as this year was, it was also hard. We, my family, we lost everything we had in the storm. Every photo, every piece of paper, every material thing we had. After the storm my friends and I just went around Long Beach for two months demoing each other’s houses. Eventually we started the NY Beach Relief Fund.

We, as New York surfers, had never really asked the surf community for very much. But this time we called people and asked them to help us rebuild our town. We got donations from 36 states, 9 countries. We pulled in over $100,000 just from surfers around the world… It brought everything back to what’s real. Those months really built my momentum going into this year.

Pulse: We’re legally obligated to ask you for your worst wipeout story, so…
WS: January 5, 2007. Todos Santos [Mexico]. It was one of the biggest days I’ve ever been in the ocean. There were 60-foot waves, like buildings. The whole horizon went black and this giant set broke about 20 yards past us. I tried to paddle through it but I got sucked back over by the wave. In just seconds I went from 60 feet above sea level to 40 feet below sea level. It was like a giant grabbed me by the hood of my wetsuit and swung me around. My head slid all the way down inside the stomach of my wetsuit and my eardrums were ringing, but somehow I didn’t burst them.

Eventually I managed to Houdini my way out of the wetsuit. Then I just waited. I waited and waited and told myself not to panic, that eventually I would surface. I started to feel my fingers and my feet going numb, and I knew that I had about 20 more seconds. If the numbness gets to your heart, you can pass out. I thought, “This could be it.” But I kept a good attitude. I didn’t move a muscle I didn’t need to move and then a little whitewater just grabbed me and moved me to the surface and I took the best breath of air of my life. The Jet Ski came and got me and then I had to decide if I wanted to keep doing this.

Pulse: You had a crisis of confidence?
WS: I was 22. I was questioning a lot of stuff at that time. I don’t want to make this about God, but I prayed on it and obviously now I’m still here doing it. My family is Christian and I was raised that way, but after that my relationship with God deepened. 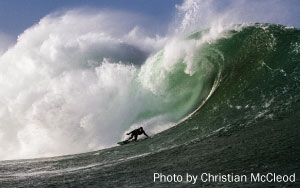 Pulse: Ok, let’s balance out that memory. What was your best wave?
WS: I went to Teahupo’o in Tahiti this year with my friend Kealii Mamala. It was him and [world record holding big wave surfer] Gary McNamara and me. I studied the wave before the trip and watched a lot of footage to see how people ride it. I did my homework and studied some lines and then once I was there, it was just one of those things. I caught this really big wave and the ocean took me and I just held my line… I just held on and held on and then the wave spit me out of the barrel and all the boats were cheering. It was one of those things you can feel maybe a few times in your life if you’re lucky. I’ll work the rest of my life to feel that way again.

Pulse: How did that East Coast Surfer of the Year title go down?
WS: I got big waves in Hawaii and Tahiti and went to Chile and surfed down there. I got a Billabong Wave of the Year entry in Tahiti and I also went to Ireland and Spain. I’ve just been in warrior mode. A lot of things went my way and got documented and I realize that all that work had a lot of consequence.

Pulse: How do you follow up on that? What’s next for you?
WS: I just have to keep building. I’ve only been on the invite list for one event, so I have to keep being where the big waves are. Already this year I was out at Jaws [a beach on the north shore of Maui] for the first big session. In life it’s about experiences. Every day is a gift, no matter who you are. No matter if you’re a racecar driver or you like video games, it’s all about saying, “Today I’m going to be happy and not dread the things I can’t control.”