Nobody thought the Touareg would last beyond the first couple of years upon its introduction in 2002, except perhaps for the executives at VW. The Touareg was too similar to other SUVS, the market was glutted at the time, and the ride didn’t seem to be groundbreaking enough to make the splash any new vehicle needs to make if it’s going to survive. But survive the Touareg did, and after its 2007 makeover and assorted tweaks since then, it’s one of the most stylish luxury crossovers in its class, inside and out, and a worthy competitor to its rivals.

It’s super smooth and quiet, thanks in part to its clean-burning diesel engine, but it also comes in assorted gas-powered trims called “Sport,” “Luxe,” “R-Line,” “Executive,” all with assorted charms, options and pricing, and a hybrid is available as well. I didn’t know my test model was diesel until I looked up its specs, which is a testament to how far we’ve come (actually, “they’ve,” not “we’ve) in eliminating the stinky diesels of yore. It also means the engine takes a wee few seconds to ignite when you push the center console-mounted button to start the vehicle. You’re powered by a 3.0 litre, 240 horsepower, 406 ft-lb-torque engine with 4 MOTION all-wheel drive, meaning that during our recent oh-no-not-again snowfall of this year, the Touareg simply busted through the heaps of white stuff surrounding it on the street after the snowplows had done their duty. You won’t be tempted to coax any kind of lightning speed out of the ride, but it gets a healthy 23 MPG in stop-and –go traffic and about 29 on the highway. Braking is fairly soft, ditto handling, making the Touareg a much less aggressive car than some of its competitors, especially the Porsche Cayenne and BMW X5, but that may be partly due, again, to the diesel. Test-drive a gas-powered Touareg and compare. The inside is suitably plush and upscale, but my front grille cracked when a guy parked in front of me tapped my front end. Plastic, you know. 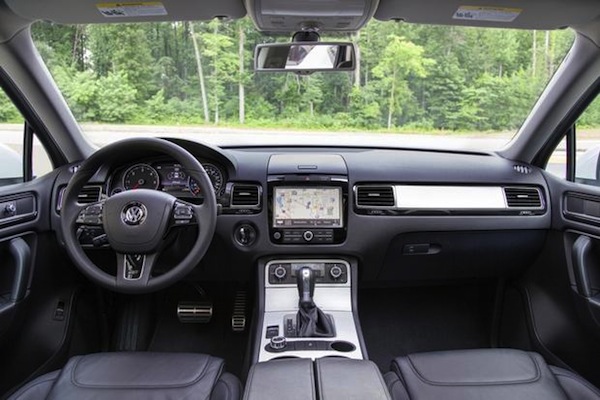 Visibility when driving is excellent all around, and the panoramic roof is a great touch, allowing riders to bask in open air in good weather. The car’s Dynaudio premium Sound system is deep and rich and satisfyingly bass-y, although getting your chosen song up on iPhone or iPod requires a long scroll-fest. The nav and climate control are top.

VW owners tend to be a fiercely loyal bunch, and there are lots of similarly priced options in this class for including the abovementioned premium models Porsche and BMW. But if you’re a nutty-crunchy bus or beetle enthusiast and want to move up while staying loyal to the brand, this is your chariot. 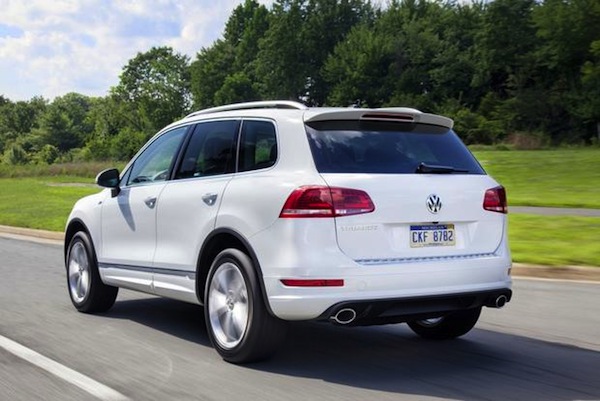